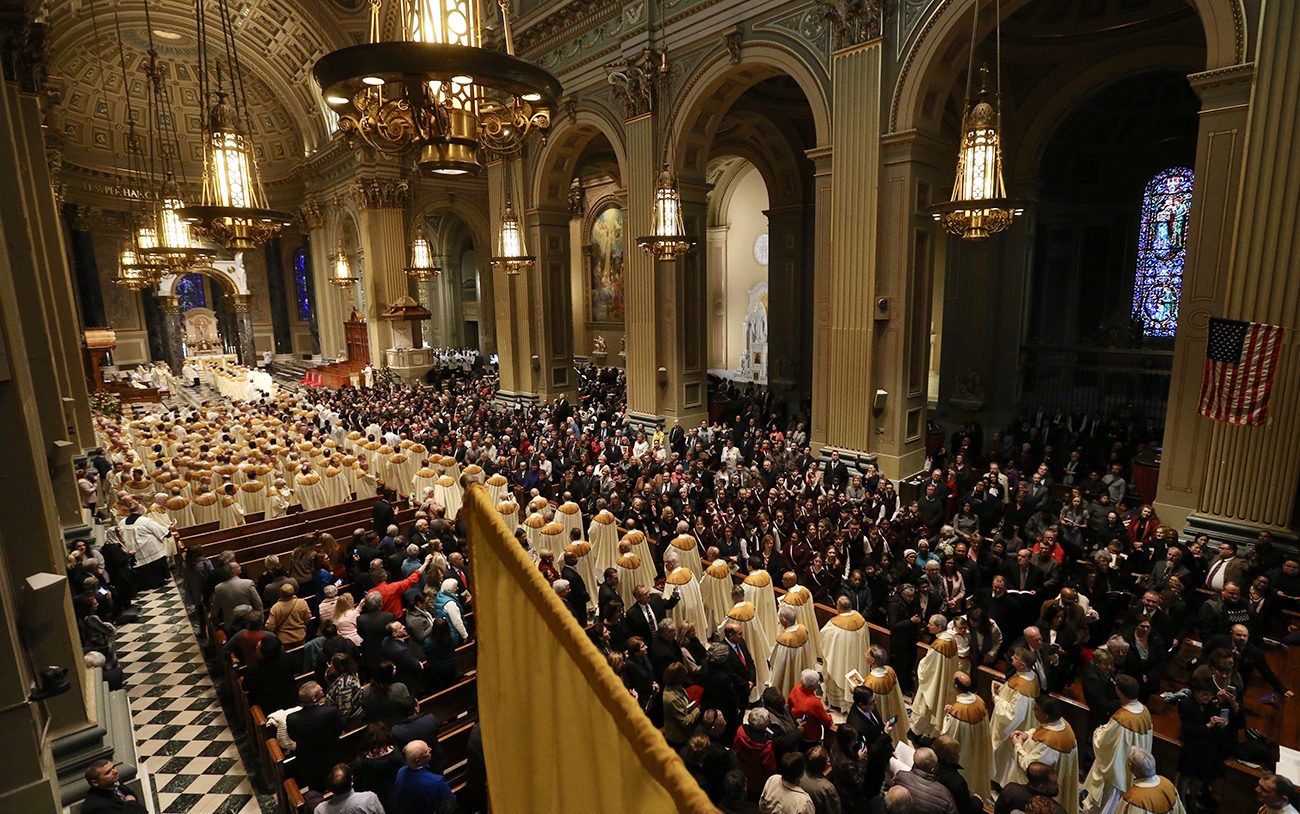 Over 2,000 people from the Archdiocese of Philadelphia and beyond filled an overflowing Cathedral Basilica of SS. Peter and Paul on Feb. 18 to celebrate the installation Mass of Archbishop Nelson J. Perez.

Some knew the archbishop since his first days as a Philadelphia priest and others greeted him for the first time. Regardless, Archbishop Perez had a smile for each one.

“I felt instant joy as he was walking down the aisle,” said Aidan McElwee, a sophomore at Immaculata University. He represented Catholic colleges and universities along with fellow student Annie Kohutka and university president Barbara Lettiere in the greeting to Archbishop Perez during Mass.

The liveliness began long before the Mass started. An hour before the opening procession, two Little Sisters of the Poor in the overflow chapel bopped their heads along to the Philadelphia Catholic Gospel Mass Choir’s rendition of “He Reigns Forever.”

Five-month-old Mary Jozefowski also joined the prelude music in a language all her own. She spent most of the Mass in a baby carrier fastened to her father’s chest and gurgled to the music as nearby Sisters of Charity smiled sweetly at her.

Finding standing room in the back, her father Jozef Jozefowski was taken by surprise as his baby daughter received about 20 blessings from various priests as they processed out of the cathedral at the end of the celebration. Jozefowski sought to show his support for now retired Archbishop Charles J. Chaput, who is his good friend and spiritual director.

When asked what brought her to the installation Mass, Nicole Baker from St. Patrick Parish in Malvern smiled and said, “He (Archbishop Perez) wrote that everyone is invited and I took him up on it.”

Baker was especially touched by the closing point of the archbishop’s homily, which he asked everyone to repeat: “Never underestimate the power of the Spirit of God working in you, through you and despite you.”

Eighth-grader Nicole Ortiz was also inspired by those words. Her companion, high school sophomore Andrea Canenquez, agreed. “I think everything the (arch)bishop was talking about was really beautiful,” she said.

The girls and their families traveled from Virginia to join their fellow Philadelphia members of the Neocatechumenal Way in supporting the new archbishop.

Maria Murillo from St. Dominic Parish in Philadelphia had less distance to cover with her husband and six children, and she was ecstatic to welcome the Philadelphia archbishop home. Archbishop Perez married the couple in 2008, and Murillo said the archbishop’s appointment is “very special in our hearts.”

Many in attendance had connections to Archbishop Perez from his early days as a Philadelphia priest.

“We knew him as a young priest so to see him at this level is amazing,” said Margie Santiago from St. Francis Xavier Parish in Philadelphia.

Micah Sumner brought his seven children to Archbishop Perez’s installation “because I want them to experience the church alive and active. It’s a way to pass on the faith,” he said.

“It was great to see the strength of the church,” he added, referring to the overflowing attendance. Sumner and his family are also part of the Neocatechumenal Way, and they moved to Philadelphia by Archbishop Chaput’s invitation five years ago.

Sumner and the large group of Neocatechumenal Way members in attendance expressed a desire to support newly appointed Archbishop Perez.

Walner Diaz, a Vincentian seminarian studying at St. Charles Borromeo Seminary, met Archbishop Perez when he was an auxiliary bishop in the Diocese of Rockville Centre. This was Diaz’s first time at a bishop’s installation and he felt “very happy” to be a part of it.

Diaz, in second theology at St. Charles, “always felt great admiration” for the archbishop and “feels very inspired by his ministry.” Originally from El Salvador, Diaz expressed the importance of the archbishop’s leadership to the Latino community in Philadelphia.

Eddie Alfonso from St. Peter the Apostle Parish in Philadelphia shared Diaz’s sentiment. Alfonso attended the Mass with his seventh-grade daughter, Hannah, who as a Catholic elementary school representative greeted the archbishop during the Mass.

Greeting the new archbishop was not a privilege reserved for specific representatives, as Archbishop Perez returned after Mass to greet anyone who wanted to say hello. The line stretched down the center of the cathedral, and the archbishop stayed long passed the ceremony’s closing hour.

Eric Clark was one of many who stood in line to greet the archbishop for the first time. A catechumen at the Cathedral Basilica of SS. Peter and Paul, Clark will be fully received into the Catholic Church at the Easter Vigil.

“Mass was beautiful,” Clark said of the installation. “I haven’t been to any Mass with this much revelry.”

Clark mentioned that he will be lifting the new archbishop up in prayer, a humble reminder for all the faithful to do the same.

NEXT: Relive the installation Mass for Archbishop Perez