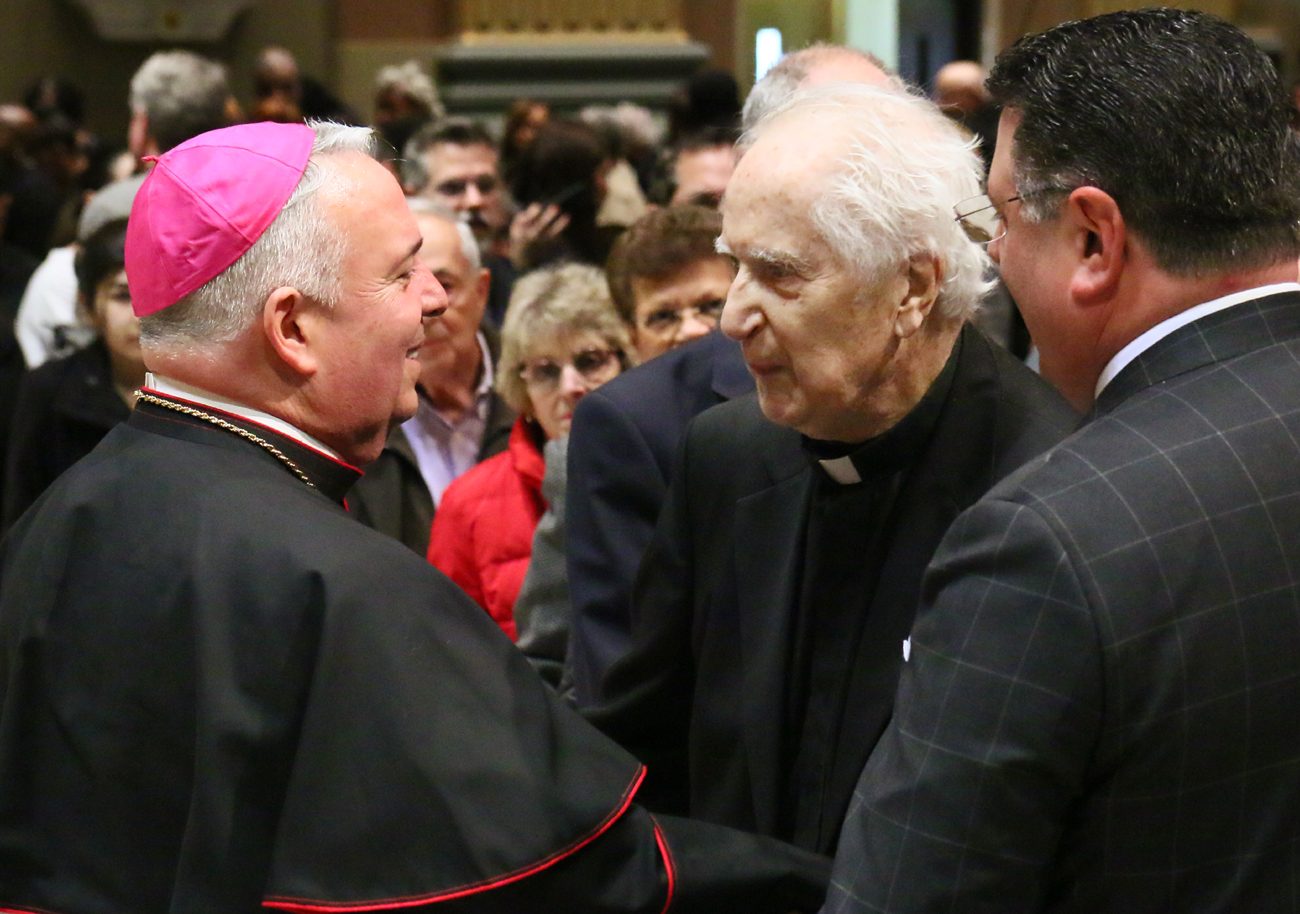 Father Michael Feketie (center), who greatly influenced Archbishop Perez to become a priest, greets the archbishop and his brother Louis Martin Perez (right) after the Feb. 18 installation Mass at the Cathedral Basilica of SS. Peter and Paul.

How often that metaphor is apt. You might say Father Michael Feketie, many years ago a young priest of the Archdiocese of Newark, dropped that pebble and the most prominent part of that resulting wave is now Philadelphia’s Archbishop Nelson J. Perez.

While a religious vocation is a complex process of call and response, Father Feketie is the one man Archbishop Perez credits with being the most influential in his decision to become a priest.

The Perez family as a whole became close to Father Feketie, first when he was a priest at St. Augustine Parish in Union City, New Jersey and then as pastor at St. Joseph of the Palisades in West New York, N.J.

“He was the priest I wanted to imitate as a child,” Archbishop Perez said in an interview.

“Nelson came from a good, solid family rooted in the faith, especially on his mother’s side,” Father Feketie said. “Not just them but his aunt and uncles and cousins.”

The priest stayed close to the family over the years, even serving as godfather for the archbishop’s younger brother, Martin. 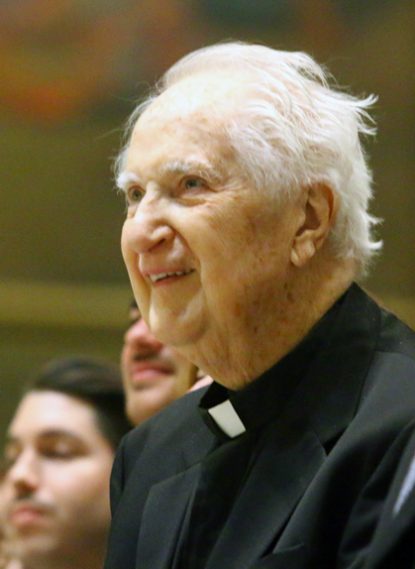 Father Michael Feketie watches with joy as his longtime protege and family friend, Archbishop Nelson Perez, is installed as archbishop of Philadelphia Feb. 18 in the Cathedral Basilica of SS. Peter and Paul. (Sarah Webb)

While Father Feketie, at age 89 is theoretically retired in residence at St. Mary Parish in Plainfield, New Jersey, sacramental ministry is still very much a part of his life. He celebrates Mass, hears confessions and counsels those who come to him.

An hour before this interview, which he modestly hesitated to give, he presided at the funeral Mass for a young parishioner who died under tragic circumstance.

Originally from Sacred Heart Parish in Vailsburg, N.J., he is himself a grandson of immigrants and mixed Irish-Austro-Hungarian heritage.

He credits Sister of Charity Mary Carmela who taught him in eighth grade with influencing his own vocation and that of others. She would find some pretext to encourage them. She might say, “Michael will you pick up that book lying on the floor?” Then, “Why don’t take it home and read it?” It would turn out to be the Lives of the Saints or something similar.

After graduating from Catholic high school he entered the Newark archdiocesan seminary, and it was his goal along with several other classmates to switch to the Maryknoll congregation after ordination and serve in China, converting the Chinese people. But Mao Zedong had other ideas and China was closed to missionaries.

The young Father Feketie and another newly ordained priest were asked if they were willing to go to Puerto Rico for two years, learn Spanish and then be placed in Hispanic ministry on their return. They did, and the rest is history.

“Now I’ve been doing Hispanic ministry for 63 years,” Father Feketie said. “I want to stay active; Hispanic ministry is very is important and extremely rewarding. What the church needs is more young men for the ministry.”

For all of his many years as a priest or pastor he has served in a ministry he loves. He has also watched with pride as Nelson, his young protégé, has advanced in the Church. Father Feketie has attended his ordination as a deacon and priest, elevation to monsignor, ordination as a bishop and now his installation as an archbishop.

And what better role model can there be for an archbishop but the humble parish priest he admired as a young boy? What a wonderful way to stay grounded.