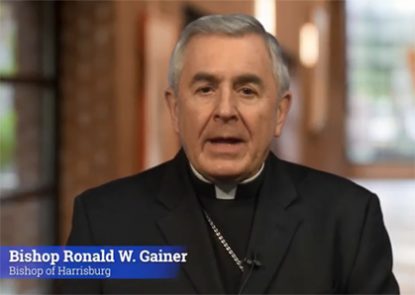 Bishop Ronald Gainer explains the filing for bankruptcy reorganization of the Diocese of Harrisburg Feb. 18 in a still image from a video on the diocese’s website.

The Diocese of Harrisburg has filed for bankruptcy, Bishop Ronald Gainer announced at a press conference Feb. 18 in Harrisburg.

Citing “a steady decline in church attendance and the reality of dwindling church revenues” as well as financial reparations for survivors of clergy sexual abuse and high legal costs, the bishop said the diocese “regrettably” had to file for bankruptcy reorganization under Chapter 11 of the United States Bankruptcy Code. (See details of the filing here.)

After prayerful discernment, “countless discussion with our accountants and attorneys, and in consultation with, and approval from, our Diocesan Finance Council and College of Consultors, our diocese has had to come to terms with the harsh reality that we no longer have the funds to meet our current obligations,” said Bishop Gainer.

The reorganization will allow the Harrisburg Diocese to continue its ministry work while also equitably compensating its creditors, the bishop explained.

Chapter 11 bankruptcy allows the diocese to continue paying salaries and benefits to employees as it develops a plan to pay creditors and negotiate settlements. The plan would need to be approved by a bankruptcy court.

A “key information” document on the diocese’s website explains that the diocese views the Chapter 11 reorganization as “the fairest course for all survivors, the best method to assure all survivors are compensated fairly and equally, and the best course to protect our ability to operate.”

“Had the diocese not filed for protection under Chapter 11,” the document read, “it would face multiple civil actions, a slow, unpredictable and costly process that would require years of court involvement, and those claimants who filed suits first would receive all available funds to the likely exclusion of other survivors. As a result, later claimants would receive nothing. Most importantly, such lengthy proceedings delay justice for the survivors and only add to their pain and suffering.”

In recent years the diocese “has been forced to confront our horrific past regarding clergy sexual abuse,” Bishop Gainer said. “Today, we are facing some difficult financial realities. Despite making every attempt to scale back operations and reduce overhead, we are currently unable to meet our financial obligations.”

The diocese’s financial situation was in a challenging condition for several years before receiving a 2016 subpoena by the Pennsylvania Grand Jury investigating clergy sexual abuse in the commonwealth, the bishop explained. The report was made public in 2018.

“Responding to that investigation forced us to incur very heavy legal costs, which has had harsh financial consequences for the diocese,” Bishop Gainer said. “Those costs were not something the diocese was able to plan for in our budget, which greatly limited the options available to us to correct the preexisting financial trend.”

The diocese’s current financial status, “coupled with changes in the law both here and in New Jersey, where we are already named in one lawsuit and where we anticipate more to follow, left us with no other path forward to ensure the future of our diocese,” he said.

“Despite the success of the Survivor Compensation Program, which helped 111 survivors of clergy child sexual abuse, or 96% of those who participated in the program, we already are in receipt of half a dozen new lawsuits, any one of which could severely cripple the diocese.”

Bishop Gainer said it was his duty to uphold the “core mission” of the Harrisburg Diocese, “which is to remain focused on Christ’s mandate to preach, teach, sanctify, and to serve those in need,” the bishop said. “We must work to bring the Chapter 11 process to a conclusion, as soon as is reasonably possible and in a way that allows us to be present to the community, as we have been for the past 152 years.”

He stressed that the bankruptcy filing does not include the parishes and schools of the diocese as they are considered separate legal entities. The diocese covers 15 counties in central Pennsylvania, in which 89 Catholic parishes are located.

“When I think about our current situation and the future, I cannot help but think about what it will take to rebuild and strengthen our diocese as we move forward,” Bishop Gainer said. “You cannot build anything without a strong and solid foundation. As we read in Luke chapter six, verse 48, ‘He is like a man building a house, who dug deeply and laid the foundation on the rock; when the flood came, the rivers burst against that house and could not shake it, because it had been well built.’

“Our diocese currently lacks that strong foundation,” Bishop Gainer said. “However, at the end of this difficult process, we will again have a solid foundation to build upon.”

A page on the Harrisburg Diocese’s website, www.hbgdiocese.org, describes a path to a more vibrant and secure future through “A Foundation to Build Upon” and posted extensive information in a FAQ document.

“I humbly ask for your prayers for our diocese as we move forward in this process,” Bishop Gainer said. “May God grant us every grace needed during this difficult time. May Mary, Mother of the Church and our Mother, intercede with her Son to be our strength and support as well.”

Rachel Bryson is executive director of public relations for the Diocese of Harrisburg. This story was edited by CatholicPhilly.com.