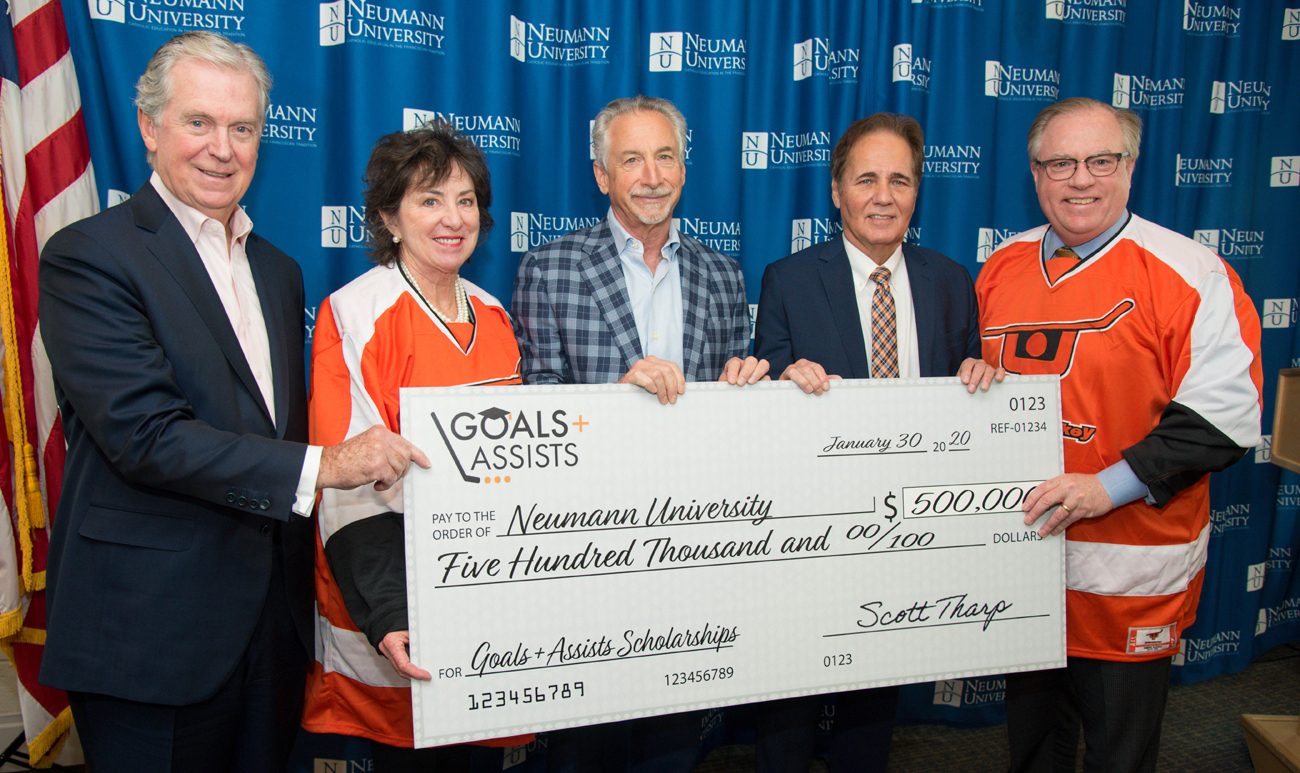 In a very busy recent news cycle, especially with Philadelphia’s new archbishop, some noteworthy events don’t receive their due recognition. Here are a few concerning our local Catholic colleges and universities.

The Ed Snider Youth Hockey Foundation and the Goals and Assists Scholarship Fund has presented a grant of $500,000 to Neumann University.

Neumann is the first Catholic college selected for the grant, which is for freshman or transfer students who participated in Snider Hockey programming. It will support 100 scholarship years.

“This generous gift from Snider Hockey will ensure that dozens of young women and men have the opportunity to earn Neumann University degrees and launch their careers without student loan debt,” Domes said.

The scholarship applies for a maximum of four years and only in pursuit of an undergraduate degree.

Cabrini University’s new Nursing Program has received a $1 million commitment from Maguire Foundation cofounders James J. and the late Frances Maguire. The gift will provide operating and capital support for the university’s Bachelor’s in Science in Nursing degree (BSN).

The first awards will be made in August 2020. Students will gain four-year scholarships based on financial need, academic achievement and involvement in community service or extracurricular activities and a continuing major in nursing.

“The Maguire Foundation is delighted to support the Maguire Nursing Scholars Program at Cabrini University,” said Jim Maguire, who served as the first lay chair of the Cabrini Board of Trustees from 1977 to 1980.

“The Maguires’ gift will move us forward on our goal of empowering nursing students to embrace their personal convictions and use their passion to inform and influence education, policy and practice in nursing and health care,” said Nursing Program Director Jennifer Specht.

Villanova University has agreed to be the facility where an international group, the Catholic Committee of Nurses and Medical Social Assistants, will hold its World Congress XXI in August 2022 with the National Association of Catholic Nurses USA as hosts.

As a kickoff there will be a special event this year at the auditorium of Villanova’s School of Nursing on March 9. Among the distinguished speakers or guests are Cardinal Peter Turkson, president of the Pontifical Council of Justice and Peace; Archbishop Gabrielle Giordano Caccia, permanent observer for the Holy See at the United Nations, and Philadelphia’s own newly installed Archbishop Nelson Perez.

Holy Family University, which received a Title III strengthening grant of $2 million this year from the U.S. Department of Education, announced the appointment of Lisa A. Ratmansky to serve as executive director of the university’s new Center for Teaching and Learning (CTL).

“We are so grateful for having received this highly competitive grant,” said University President Sister Maureen McGarrity, C.S.F.N. “It was a thrill to announce the formation of the center, and now having Lisa with her stellar background at the helm will allow us to move thoughtfully and strategically into the future.”

The Center for Teaching and Learning will partner with faculty and staff from across the campus to enhance student support with the goal of making student success in all its myriad forms, according to the university.

The center will work collaboratively with other offices to provide mission-centered student services, combining tutoring with counseling and career services.

Ratmansky joins Holy Family University from Cabrini University, where she last served as director of its Center for Inquiry, Teaching & Scholarship.

Moto Design Shop, a contemporary architecture and design firm, has received the Silver Medal, the highest award of the Philadelphia Chapter of the American Institute of Architects for the design of a new Arrupe Hall Jesuit Community at St. Joseph’s University.

It will serve as the residence for 15 Jesuit priests who work and serve at St. Joseph’s University, St. Joseph’s Preparatory School and Gesu School, all in Philadelphia. It is named for the late Pedro Arrupe, superior general of the Jesuit order.

“The project is a successful investigation about light and materiality,” said Juan Miro, a member of the awards jury from Austin, Texas. It is “sometimes textured, sometimes monolithic. Other times it appears weightless, each creating a lovely moment in time.”

“We think of the chapel design as being about the swirling movement of time and the altar communicating the firmness of eternity,” said Jesuit Provincial Robert Hussey.

“Inspired by the shift between the Julian and the Gregorian calendars,” the press release states, “the chapel takes in a curvilinear form, the brick pattern further expands on these geometrics, then morphs to create a veil, filtering natural light through masonry openings.”

Checking pictures and information on the internet of what the residence and especially the chapel will look like, it does promise to be a prize-worthy work of architecture.

NEXT: Harrisburg Diocese files for bankruptcy