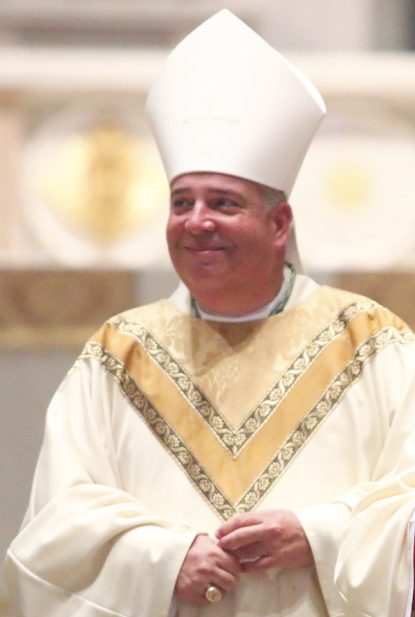 Preparations for the installation Mass next week of Archbishop Nelson J. Perez as the new archbishop of Philadelphia are in full swing, and planners are inviting everyone to take part prayerfully in person or on their screen of choice.

The Cathedral Basilica of SS. Peter and Paul will open its doors at 12:30 p.m. on Tuesday, Feb. 18 for the scheduled 2 p.m. Mass. Worshipers can arrive without a ticket and find a seat in the basilica or alternatively in the adjoining chapel on a first-come, first-served basis. All should be seated by 1:15 p.m., planners advise.

About half of the pews in the basilica will be reserved for clergy, family of Archbishop Perez and representatives of various sectors of the Catholic and non-Catholic populations of the Philadelphia region.

The remainder of the pews as well as chairs placed throughout the basilica will be available for seating to a capacity of about 1,500. The chapel of the Blessed Sacrament will accommodate hundreds more people for the liturgy.

“We’re confident we’ll have a comfortable place for more than 2,000 people to sit,” said Father Dennis Gill, rector of the cathedral, during a Feb. 13 briefing for local media.

Since the announcement of Pope Francis’ Jan. 23 appointment of Archbishop Perez to succeed Archbishop Charles Chaput as shepherd of the Philadelphia Archdiocese, 2,500 invitations were sent out to guests across the United States to bishops, priests, religious and lay people, and some responses are still coming in, Father Gill said.

Regardless of where attendees at the Mass are sitting, they will enjoy views of the liturgy thanks to screens throughout the basilica and chapel. High-definition remote cameras deftly directed by Daniel Kearns will present the liturgy in all its beauty, from its beginning with the entrance procession at 1:40 p.m. to the conclusion about 4 p.m.

Four choirs – consisting of the Archdiocesan Choir, Cathedral Choir, Philadelphia Catholic Gospel Mass Choir and a Hispanic choir – will sing at the Mass along with various musicians. All of it will be captured in high-definition audio.

The multimedia presentation goes well beyond the cathedral as users can watch and participate in the Mass via streaming video on their smart phone or computer through CatholicPhilly.com or ArchPhila.org, the official archdiocesan website.

(Check CatholicPhilly.com starting Tuesday morning for the video feed at top of page, and watch for full coverage of the festivities by late afternoon.)

The four local television stations of the region also are planning to broadcast all or portions of the Mass.

The Mass will begin with a ceremony in which Archbishop Perez takes possession of his cathedral church. That is followed by a reading of the official papal document appointing him to the Archdiocese of Philadelphia, his acceptance of the crozier or shepherd’s staff of a bishop, and presentation to his cathedra – the Greek word for chair, representing the seat of the archbishop in his cathedral.

A procession to greet the new archbishop will include representatives from various groups in the archdiocese including seminarians, religious sisters, lay persons, diverse cultural groups, ecumenical and interreligious leaders, students, children and many more.

The Mass then proceeds typically, with Scripture readings, the archbishop’s homily, the Liturgy of the Eucharist, concluding prayer and final hymn.

At least five languages will be featured in the liturgy – English, Spanish, Vietnamese, Tagalog, American Sign Language and more — reflecting the ethnic diversity of the archdiocese.

Those at the cathedral can participate in the liturgy actively through a 44-page booklet.

At the conclusion Archbishop Perez intends to greet everyone in attendance at the Communion rail in the front of the cathedral.

Although it should go without saying, all worshipers coming to the Mass are asked not to bring packages or cups of coffee into the cathedral. All will find ample bathrooms through the church, with numerous ushers providing direction.

Whether viewed in person or remotely, the Mass is shaping up to be an experience never to be forgotten by the faithful and the new archbishop they will welcome home to Philadelphia, Archbishop Nelson Perez.

PREVIOUS: Hispanic Catholics welcome one of their own as shepherd