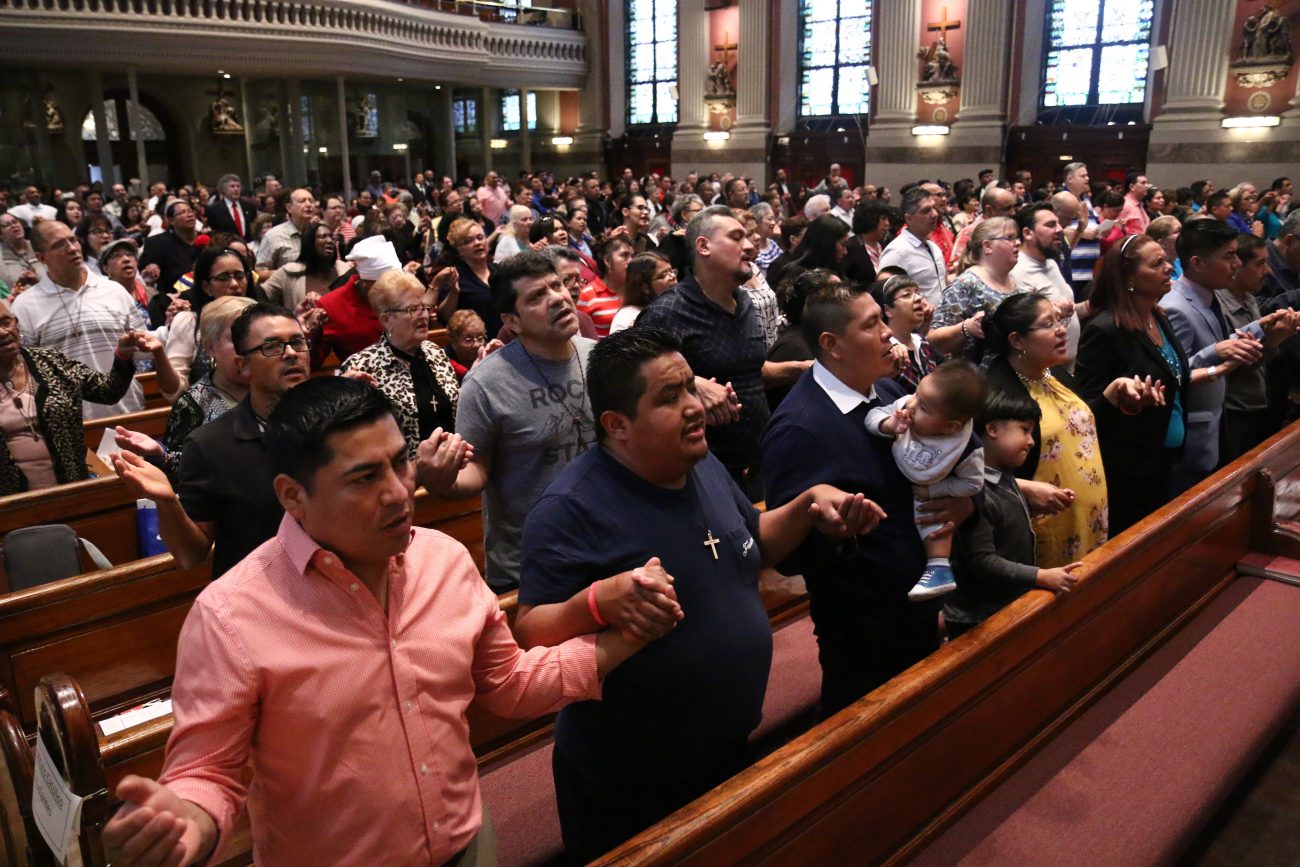 Attendees pray during the Archdiocese of Philadelphia’s annual Hispanic Heritage Mass at St. Peter the Apostle Parish in Philadelphia, Oct. 6, 2018. Some 82,000 registered Catholics in the archdiocese currently identify themselves as Latino or Hispanic; Archbishop Nelson J. Perez is himself of Cuban-American descent. (Photo by Sarah Webb)

Latino and Hispanic Catholics throughout the Philadelphia Archdiocese are eager to welcome as their new shepherd the man they have long called “Father Nelson.”

Archbishop-elect Nelson J. Perez will be installed as the archbishop of Philadelphia Tuesday, Feb. 18 in the Cathedral Basilica of SS. Peter and Paul.

“I have known him since I was a baby,” said 24-year-old Eliza Thillet, a youth group coordinator at St. William Parish in Philadelphia. “And I’m completely ecstatic to have him here in Philadelphia.”

An accomplished liturgical musician, Thillet – who, like her Puerto Rican family, is bilingual — particularly hopes that Archbishop Perez will help “get our Hispanic youth back to practicing our faith.”

Youth and young adult outreach is just one of the many pastoral needs cited by area faithful who collectively represent some 23 nations and cultures in Central and South America, Europe, and the Caribbean – including Cuba, from which Archbishop Perez’s parents emigrated to the U.S.

According to several members of these communities, Archbishop Perez’s appointment is a sign of affirmation and hope, as well as a challenge to become what Pope Francis has called una Iglesia en salida – “a church that goes forth.” 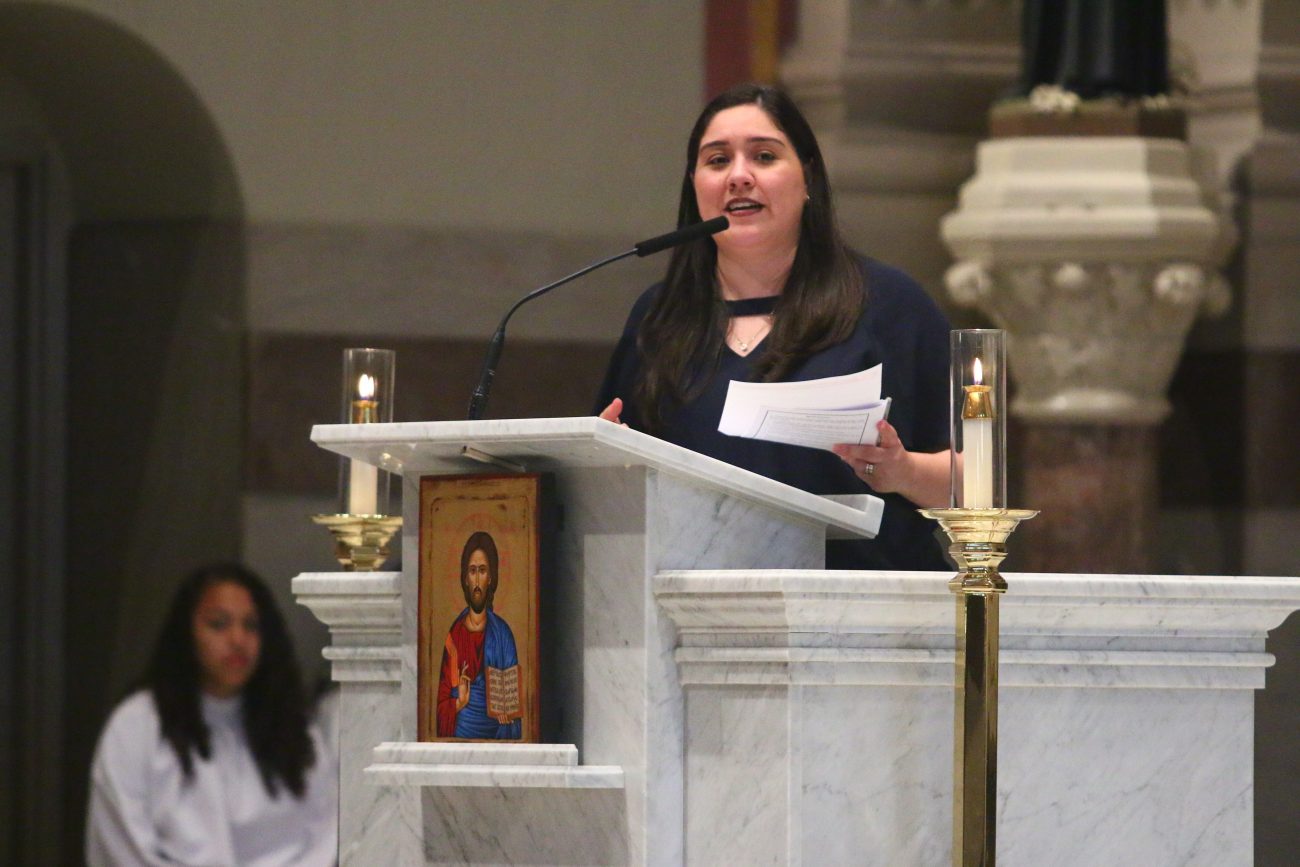 Kathia Arango, director of the archdiocesan Office for Hispanic Catholics, speaks during an Oct. 6, 2018 Hispanic Heritage Mass at St. Peter the Apostle Parish in Philadelphia. Arango says that the appointment of Cuban-American Archbishop Nelson Perez is both an affirmation of Latino and Hispanic heritage, and a call to be “a church that goes forth.” (Sarah Webb)

On the other hand, he said, “’Latino’ emphasizes only those who are from Latin America.”

Father Puleo, who has taught Spanish at a number of colleges (including St. Charles Borromeo Seminary in Wynnewood), serves some 8,500 of the archdiocese’s roughly 82,000 registered Catholics of either Latino or Hispanic origin.

Even when used accurately, both terms mask significant cultural differences among those of Spanish or Latin American heritage. In fact, neither word would normally be used by individuals in identifying themselves, said Kathia Arango, director of the archdiocesan Office for Hispanic Catholics.

“When people ask, ‘Where are you from?’ you don’t say, ‘I am a Hispanic community member,’” Arango said. “We say, ‘I am Paraguayan, I am Colombian, I am Mexican, I am Puerto Rican,’ and so forth.”

Such cultural diversity manifests itself spiritually, she said.

“One of the gifts the Latino community can bring to the church is its religiosidad popular (popular piety),” said Arango, citing devotions such as annual processions in honor of Our Lady of Guadalupe, patroness of Mexico and the Americas.

The Guadalupe icon is one among many for Latin American Catholics, who typically honor an image of Mary that is unique to their nation — for example, Costa Rica’s Our Lady of the Angels, Cuba’s Our Lady of Charity of El Cobre, and the Dominican Republic’s Virgin of Altagracia.

Many times, popular piety has been the only means of practicing the faith in regions without sufficient priests, said Sister of St. Joseph Linda Lukiewski, who directs Hispanic pastoral ministry at St. Joan of Arc Mission Church (part of Holy Innocents Parish) in Philadelphia.

For a significant number of first-generation immigrants, “priests were few in their countries, and many had to travel far to get to Mass,” said Sister Linda. “Many had ‘house chapels’ which included statues of saints or of Jesus, and they had their prayers and rituals in their homes.”

They have continued these traditions in the U.S., she said, noting that “the work of the church here is to help bridge this disconnect between the Mass and popular religiosity.”

The best way to do so, she said, is “to bring their devotions to the church and include them in the liturgy.” 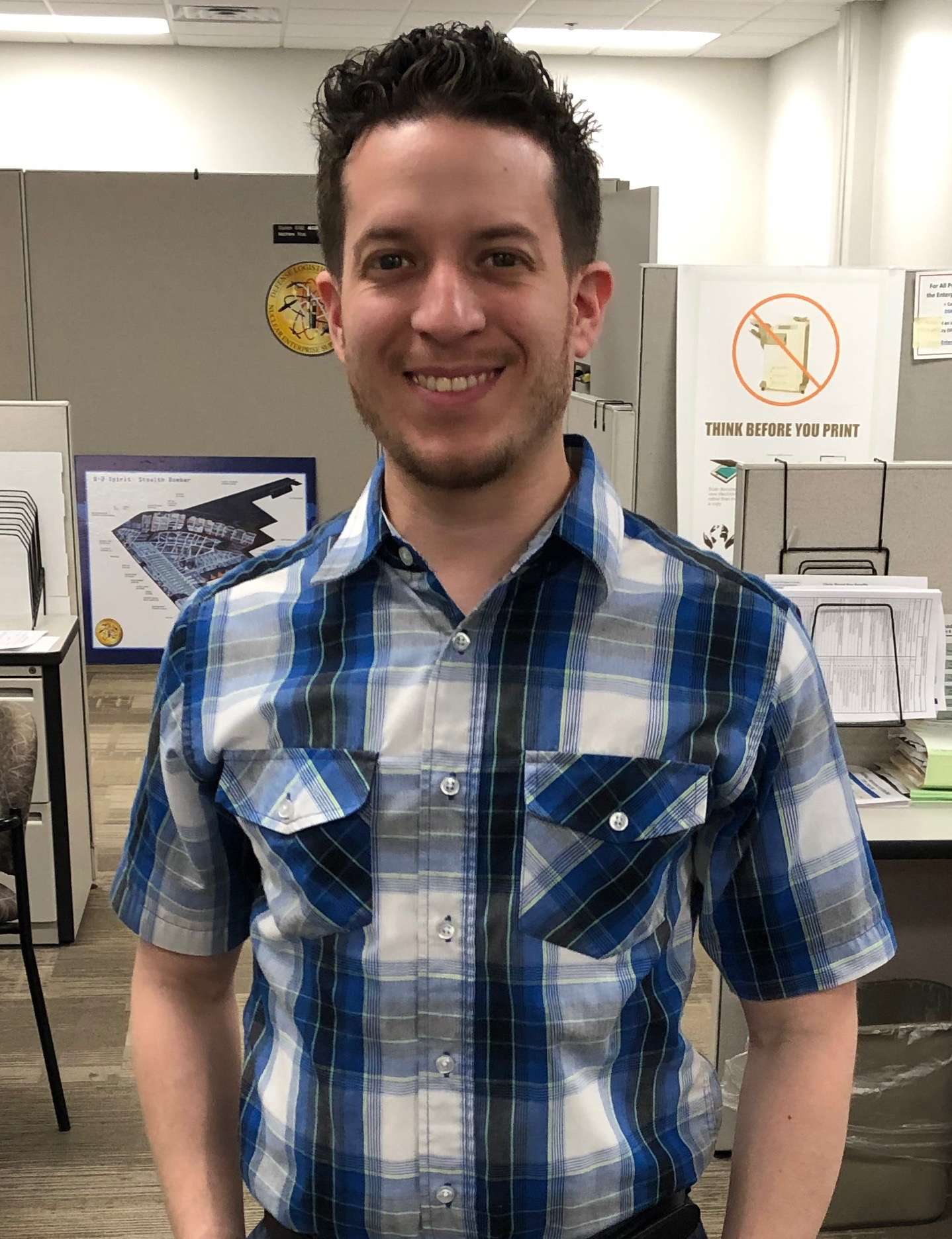 Incorporating Latino popular piety into the wider Catholic Church can revitalize the faith, while evangelizing the wider culture, said Arango.

Arango pointed to the annual archdiocesan Our Lady of Guadalupe celebration, which draws hundreds of area pilgrims who walk for miles to join a police-escorted procession around the Cathedral Basilica of SS. Peter and Paul.

“They are witnesses of the faith,” she said. “”Just by being there and being who they are, they are bringing the faith back to a downtown area that usually sees protests or other (non-religious) events.”

Arango added that traditional devotions are also important in reaching Latino and Hispanic youth, who straddle two worlds: their national heritage and the broader American culture.

The pastoral needs of these youth and young adults can vary widely, said Arango, depending on whether individuals were born in the U.S. or have only recently arrived.

“For those who don’t speak English, outreach has to be in Spanish – and not just the Mass,” she said. “Catechesis, evangelization and prayer groups have to be in their own language.”

Youth already fluent in English and in American culture “need somebody to welcome them, and then somebody to walk with them,” said Arango. 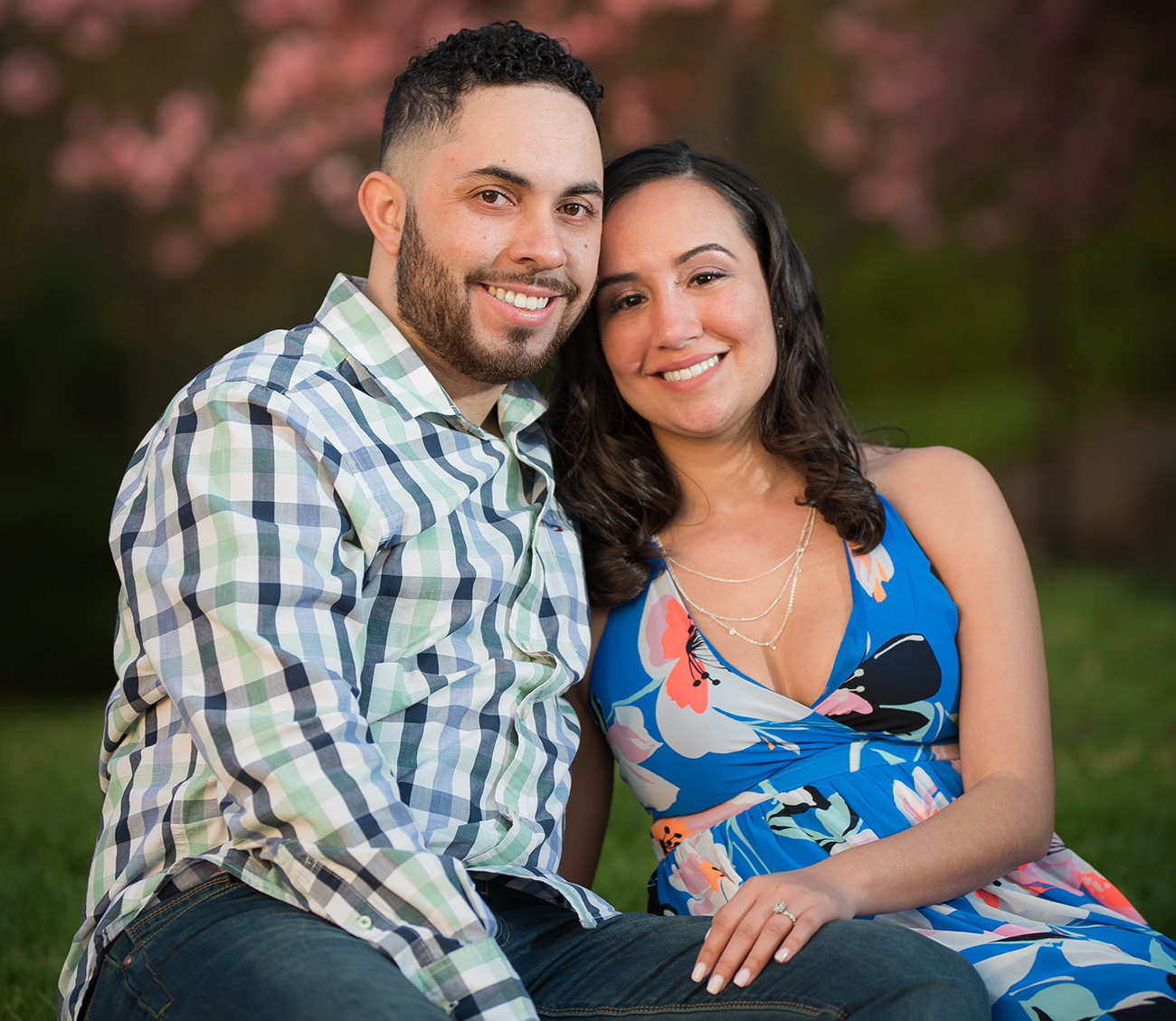 Composer Giovanni Morales and educator Natalie Rivera, who will wed in May, plan to teach their children at an early age about their Puerto Rican heritage.

Social media is vital to this task, said Natalie Rivera, a member of Holy Innocents Parish in Philadelphia.

“It’s imperative to meet young people where they are at, and in this day and age many young adults are on social media,” said Rivera, an educator at a North Philadelphia school.

In particular, “church leaders need to embrace the means by which the next generation can be reached,” said Luis Marrero, a youth group leader and liturgical musician at St. William Parish in Philadelphia.

Marrero said that apps and YouTube videos can reach youth “who see Mass as old school and won’t attend,” while demonstrating “outside of a church setting what Mass and Christ can do for them.”

Ultimately, the task of preserving both cultural heritage and faith begins at home, said Julie Thillet, a native of Puerto Rico and coordinator of religious education at St. William.

“As a parent, I feel that it is our responsibility to teach our children about their identity,” said Thillet, noting that her daughter Eliza, can “speak, read, write and sing in Spanish, as well as cook our cuisine, dance our dances, and follow our traditions.”

That’s exactly how Giovanni Morales plans to raise his children. A liturgical composer and Holy Innocents parishioner, Morales will wed Rivera in May, and the couple are looking to start early when introducing the next generation to their Puerto Rican ancestry.

“We have to show them where we came from, our neighborhoods, our roots,” said Morales. “Then we have to explain our parents’ journey, and where they came from.”

Immigration remains a critical concern and an urgent pastoral need among the region’s Latino and Hispanic Catholics, said Sister Linda.

“We need comprehensive immigration reform so that those who have been here for a long time can live without fear of deportation, and those who are trying to enter our country can come here legally,” she said. 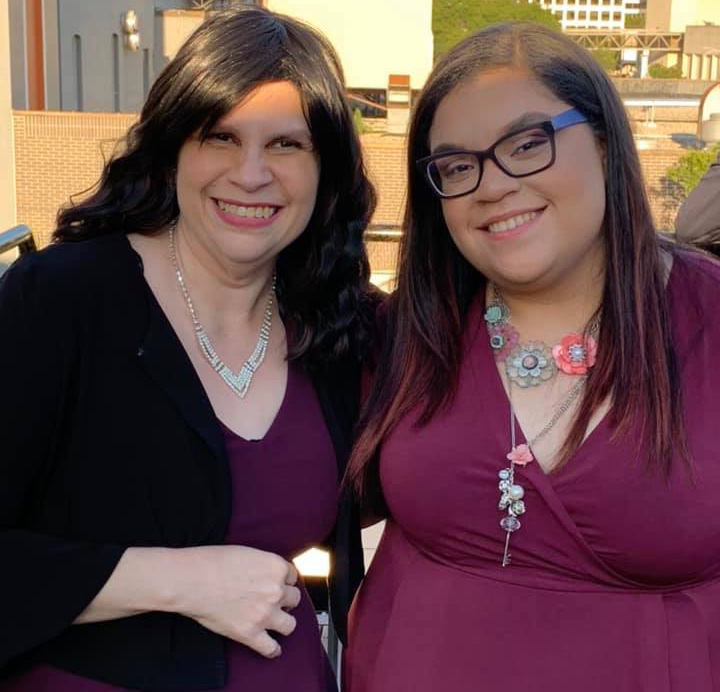 Julie Thillet, coordinator of religious education at St. William Parish, believes Latino and Hispanic parents have a responsibility to pass on their cultures to the next generation, as she did to her daughter Eliza, a youth minister and liturgical musician.

As global population movements continue to soar, nations such as the U.S. must confront the dynamic nature of culture itself, which changes even within a single generation. Arango sees this principle at work in her own daughters, who are of both Paraguayan and Colombian descent.

“I tell them, ‘You were born here, so you are American, but you are building a new culture that blends Colombian and Parguayan elements too,’” said Arango.

Given his own family’s heritage, and his extensive pastoral work among numerous ethnic groups, Archbishop Perez is an ideal “bridge between cultures,” said Arango.

“I think he’s going to bring the various communities together, as one community with different ways to worship,” she said. “Everybody will have a place at the table with him.”

She feels that the archdiocese’s Latino and Hispanic Catholics must now demonstrate that “we are able to work with everybody and to collaborate with the whole church.”

Doing so will require them to heed a call the new archbishop issued while to his Spanish listeners during a Jan. 23 press conference, she added.

“He was very clear to us: ‘I want you to be the church, I want you to be missionaries, and I want the Latino community to go forth, to be la Iglesia en salida,’” said Arango.

By taking ownership of both their faith and their evolving cultures, the archdiocese’s Latino and Hispanic Catholics can do just that, she said.

“When you belong to a community, then you can have a real encounter with Jesus,” Arango said.

NEXT: In person or on screen, Catholics invited to pray with new archbishop