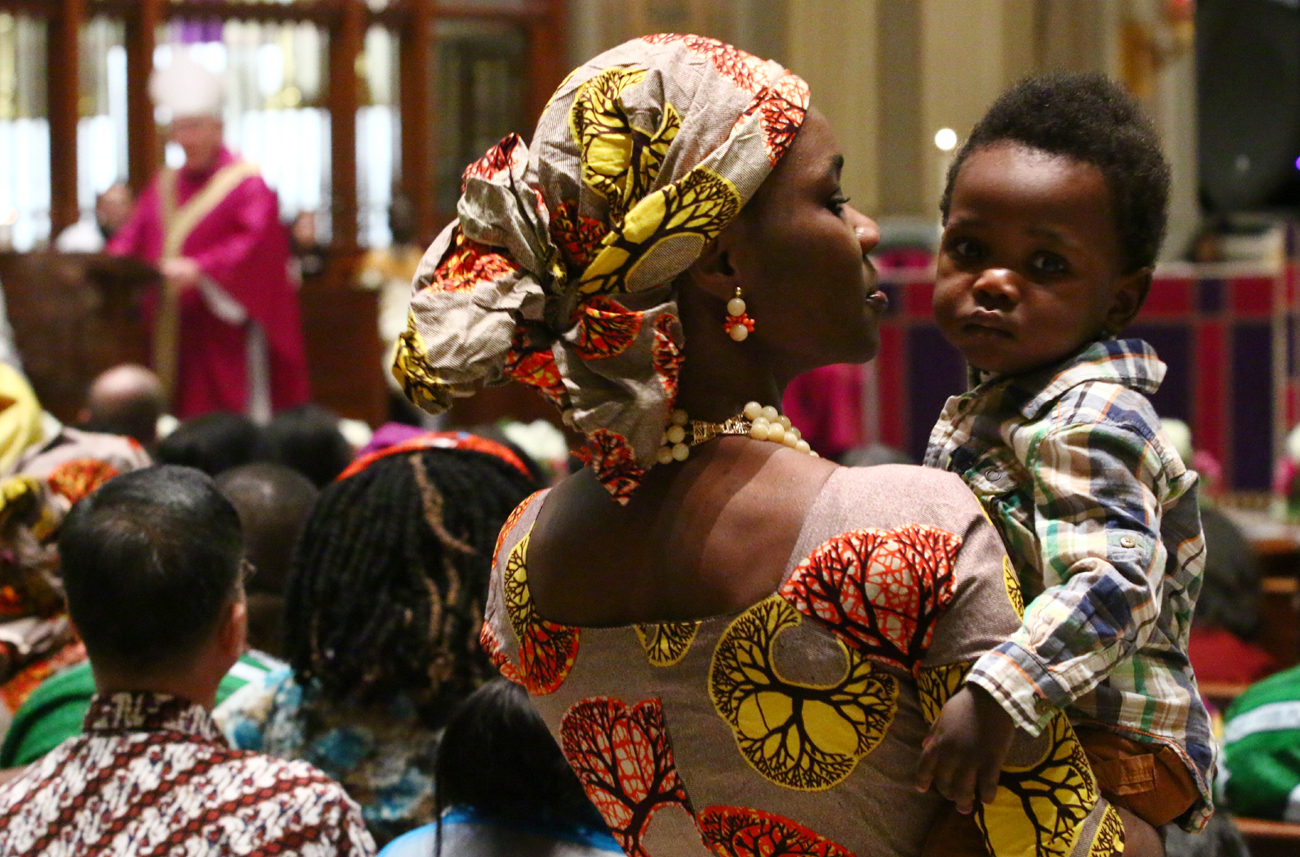 Laura Ihejirika and her son Chidinso represent the Nigerian community at a March 17, 2018 cultural heritage Mass in Philadelphia. Following a Jan. 31 decision, Nigeria and five other nations have been included in the Trump Administration’s “travel ban,” which severely restricts immigration visas. (Photo by Sarah Webb)

The Trump Administration’s Jan. 31 decision to expand a current travel ban has stunned and puzzled one group of local Catholics.

“Even Nigerians don’t understand why our nation was included,” said Emmanuel Okoro, the lay coordinator of the Nigerian Catholic community at St. Cyprian Parish in West Philadelphia.

Nigeria was one of six countries listed in a presidential proclamation that brings to 13 the number of nations facing visa restrictions. Myanmar, Eritrea, Kyrgyzstan, Sudan and Tanzania were also named in the Jan. 31 announcement.

Effective Feb. 21, immigration visas will no longer be issued to applicants from Nigeria, Eritrea, Myanmar and Kyrgyzstan. Individuals from Sudan and Tanzania are now ineligible for diversity visas, available by lottery for countries with low U.S. immigration rates.

Although the White House has stated that tourist and business travel will be unaffected by the new rules, “some people are afraid to go home to Nigeria and not be able to come back,” said Okoro.

The restriction is “punishing” for a number of reasons, he said, since Nigerian culture places a high value on family ties and on education.

According to a 2016 Pew Research report, some 59% (or about six in 10) Nigerian immigrants in the U.S. have at least a bachelor’s degree. Ten years earlier, the U.S. Census Bureau found that 17% of Nigerians in the U.S. hold master’s degrees, and 4% had obtained a doctorate.

Okoro himself has a Master of Laws (LL.M.) degree, which he earned after arriving in the U.S. some 25 years ago for advanced study. He now holds dual U.S. and Nigerian citizenship.

Faith-based and educational events, as well as family gatherings, have already been affected by the restrictions, said Okoro.

“We like to connect with people back home, and bring in speakers here for conventions and for our Catholic groups,” he said. “We can’t do that now.”

Even prior to the new rule, Dr. Henrietta Williams — a prominent Nigerian physician and pro-life advocate — was reportedly unable to obtain a visa to appear in person at a July 2019 national conference sponsored in part by the Archdiocese of Philadelphia.

In its Jan. 31 statement, the Trump Administration described the reason for the ban’s expansion as “straightforward,” since “individuals who have entered the U.S. on immigrant visas are challenging to remove.”

Okono said he and fellow U.S-based Nigerians speculate the issues that the ban is meant to address lie more with Nigerian political leaders, not “common citizens.”

“If Nigerian politicians are at fault, they could have just limited their travel to the U.S., instead of limiting all our people,” he said.

At the same time, he added, the Nigerian Catholic community is “definitely praying for the president and the government to understand our situation and our problems, and to make the necessary corrections to address whoever is responsible.”

The ban actually works to harm both Nigeria and the U.S., he said.

“Nigerians are a highly educated ethnic group, and we contribute greatly to the American educational system and to the overall economy,” said Okono. “They shouldn’t put us in such a difficult position.”

PREVIOUS: Love is in the South Philly air at St. Monica Parish

NEXT: Hispanic Catholics welcome one of their own as shepherd