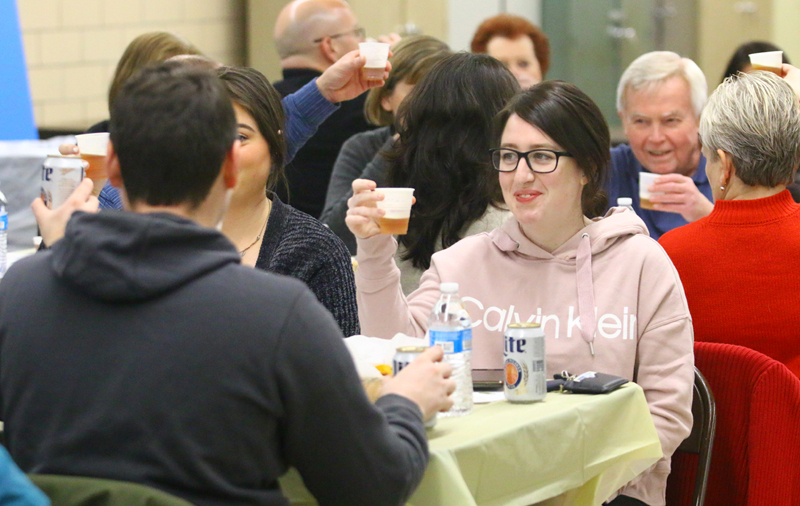 Casey Galazka joins a toast before taking a taste of her beer during the Feb. 7 "What Would Jesus Brew?" event at Resurrection of Our Lord Parish, Philadelphia. (Photo by Sarah Webb)

“God is crafty,” joked Eamon Duffy while enjoying a Founders Porter, one the five craft beers hand-selected by Deacon John Knesis for the “What Would Jesus Brew?” event at Resurrection of Our Lord Parish in Northeast Philadelphia’s Rhawnhurst section Friday night, Feb. 7.

Duffy, a 2008 graduate of Resurrection School, was one of dozens of guests at the first-of its-kind event at the parish, which knows how to pray and to party.

Ordained last year, Deacon Knesis never imagined that his passion for beer would become part of his ministry at Resurrection. But it has resulted in a unique community-building event for the parish.

Dressing up his collar with a t-shirt quoting Ben Franklin’s popular maxim, “Beer is proof that God loves us and wants us to be happy,” Deacon Knesis shared his copious beer knowledge with the crowd, noting that if Jesus were to brew beer, it would only be the best stuff made with good care and the finest ingredients.

With the characteristic enthusiasm of a true beer nerd, he told the story of Anchor brewing company, home of the craft beer revolution in America. “Purity and simplicity … combined with modern technology” are the driving forces behind what has become the steadily growing craft beer industry. 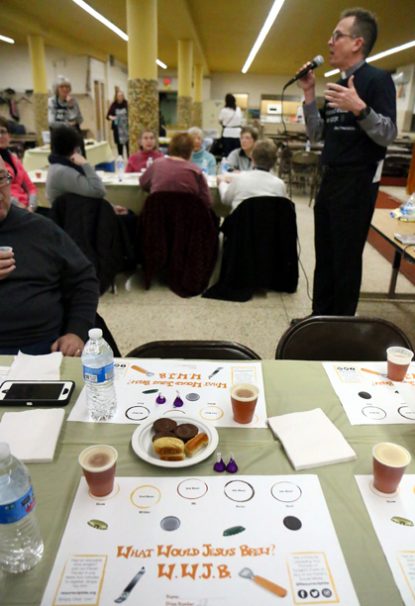 Deacon John Knesis talks about beer with people at the “What Would Jesus Brew?” event, which featured charts so participants could track their preferences for the five craft beers on offer. (Sarah Webb)

Beyond an impressive education in beer that involved brewing techniques, pouring methods and even a hands-on hops presentation, the night was primarily about welcoming others into a distinctly Catholic community.

Led for the past three years by Father James DeGrassa, the pastor whom most people lovingly call Father Jim, Resurrection Parish makes the newcomer feel at ease.

He kicked off the night’s festivities with a 13th century blessing for beer. Ending the prayer, Father DeGrassa beamed, “This is why I love Catholicism.”

His heart for the church was contagious, calling her a “sleeping giant” that gives people the grace and boldness to stand firm in a world that has gotten far off track.

Not unlike the craft brewers, Father Jim uses pure, simple ingredients mixed with a modern edge to foster the revival of a vibrant Catholic community at Resurrection.

The event drew a diverse crowd, ranging from young adults to senior citizens.

Throughout the evening, the pastor offered “mini homilettes” on a wide range of topics including reflections on Pope John Paul II, the Gospel of the Good Samaritan and the traditions of the Catholic Church.

Each mini homily began with a relatable reflection on beer itself, which made an impression on participant Gina Cashman. “I’ve never connected beer with God so much,” she said. 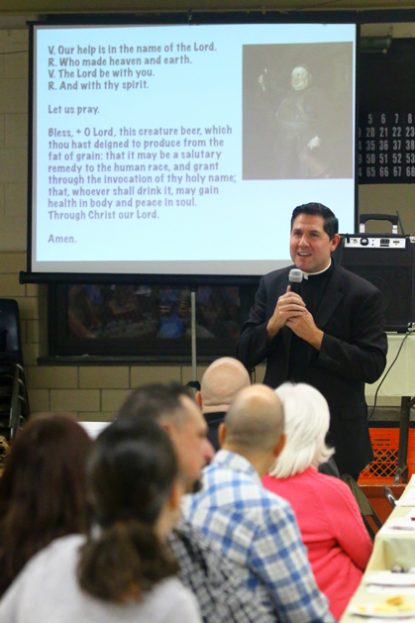 Not only did Father DeGrassa manage to use beer to catechize the young and the old, regular church-goers and those who have been away from the church for some time, he also made them laugh.

In between each tasting he invited everyone to the microphone to share their favorite jokes and songs. By the end of the evening, the crowd felt like family.

Upon closing the event, Father DeGrassa said, “Don’t think it’s over just because we’ve reached the end of the program.” He encouraged people to stay and socialize, and get to know one another.

His efforts did not go unnoticed. Valorie Daskilewicz, delighted for the rare opportunity to spend time with her two sons at church, said Father DeGrassa “is no slouch putting up food.”

She praised his generosity and doing his utmost “to appeal to a broader audience and help the parish grow.”

Some attendees never expected to have this much fun at a church-sponsored event.

“You usually separate church and going out,” said Brendan Duffy, winner of the night’s joke competition and a 2006 graduate of Resurrection School, adding “this is a nice meeting point.”

Several people in the crowd were left looking beyond the Friday night event, toward Sunday.

“With the sense of community, I feel like maybe I should go back to church,” said Diane Burkhardt, attending the event with her fun-loving cousins. And she wasn’t alone in this sentiment.

Her cousin Marianne Lamplough, a life-long member of Resurrection, said, her pastor was successfully “bringing different groups of people together. My neighbor over there said to me, ‘I really need to come back to church.’”

What’s Father’s secret?  He makes everybody feel at home.

Seraphine John, an immigrant from Pakistan, said the key is making everybody feel at home.

“I think this is a unique and very very homey parish, especially since Father Jim came, she said. “Since I am all alone here myself, I feel (Resurrection) is my home.”

Father DeGrassa and Deacon Knesis paired to make both the beers and the Gospel approachable for all. They offered a cooler full of mainstream beers such as Miller Lite and Corona to welcome anyone who was not interested in the craft selections.

The pastor appeared to enjoy “being a person of cheer” to spread the Good News about Jesus and the treasures of the Catholic faith with purity, simplicity and a modern edge. 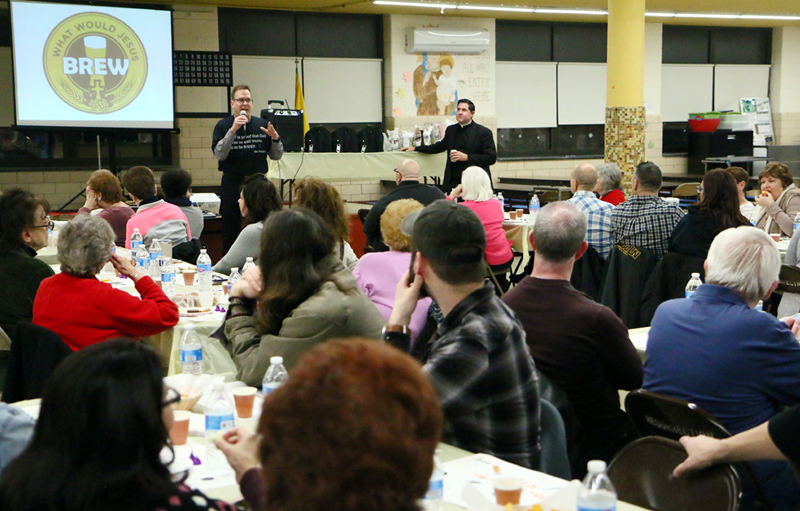 NEXT: Love is in the South Philly air at St. Monica Parish