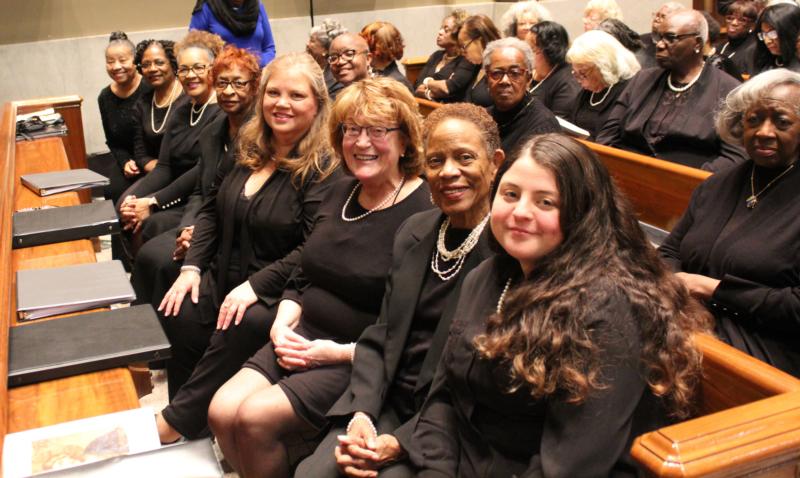 Singers from the Wilmington Diocese Gospel Choir in Delaware are seen ahead of the installation Mass of Philadelphia Archbishop Nelson J. Perez at the Cathedral Basilica of SS. Peter and Paul in Philadelphia Feb. 18, 2020. Brenda Burns, second from right in front row, said she was thrilled when the Wilmington group got word that they were being asked to participate in the installation of Archbishop Perez. (CNS photo/Joseph P. Owens, The Dialog)

PHILADELPHIA (CNS) — Brenda Burns and many of her colleagues are established Catholic gospel singers and have performed in many venues as members of the Wilmington Diocese Gospel Choir.

Events large and small have hosted the Delaware diocesan group including those as part of their affiliation with the Philadelphia Catholic Gospel Mass Choir.

Burns said she was thrilled when the Wilmington group got word a couple of weeks ago that they were being asked to participate in the installation of Archbishop Nelson J. Perez at the Cathedral Basilica of SS. Peter and Paul in the neighboring Archdiocese of Philadelphia.

She and her choir friends from the Diocese of Wilmington began working with the Philadelphia group in 2014 in advance of the World Meeting of Families and visit from Pope Francis in 2015.

“Most of us have not seen the installation of an archbishop,” said Burns, a parishioner at St. Joseph Church on French Street in Wilmington who was assigned a seat with her gospel choir colleagues in the first row to the right of the altar.

Burns and others find many reasons to be joyful at Pope Francis’ appointment Jan. 23 of Archbishop Perez, the son of Cuban immigrants. He succeeds Archbishop Charles J. Chaput, whose resignation was accepted by the pope the same day. Archbishop Chaput turned 75 last September, the age at which canon law requires bishops turn in their resignation to the pope.

“The fact that we’ve all been invited is just mind-boggling to me — to be a participant and contributor as part of such a diverse group. Folks are excited about him being here.”

The Philadelphia and Wilmington groups were joined by the gospel choir from the Diocese of Camden, New Jersey. They have attended several practices in the last couple of weeks.

“It’s a real honor to be invited,” said Loretta Young, who also serves as parish secretary at St. Joseph. “It was pretty spectacular doing the pieces the archbishop personally asked for. The music is spectacular to go along with such a noteworthy and remarkable event.

“He is such an inclusive guy and he’s really getting off to a great start. It really doesn’t involve us (in Wilmington), but it kind of does.”

“I take great pleasure in the choir’s music ministry,” said Jane Crowley, another choir member from Wilmington. “That has been what has sustained me in my Catholic faith, particularly gospel music. It’s cool to be part of the installation.

“I haven’t been completely happy with the church the last few years, but the musical part and how I can relate to my faith in that context, really means so much to me,” Crowley said.

Choir members who arrived early were greeted by Archbishop Perez several hours before the Mass, some taking selfies with the man soon to be newest leader of the Catholic Church in Philadelphia.

“It’s a pretty fantastic opportunity to be in this setting,” said Glenda Townsend, also a parishioner at St. Joseph Church on French Street.

“It sounds to me like he’s going to be very inclusive,” said Mary Mirabeau of Wilmington from her seat in the front row. “He’s demonstrated that in how he’s put together this choir.”

NEXT: St. Agnes faithful call archbishop ‘a man of action’