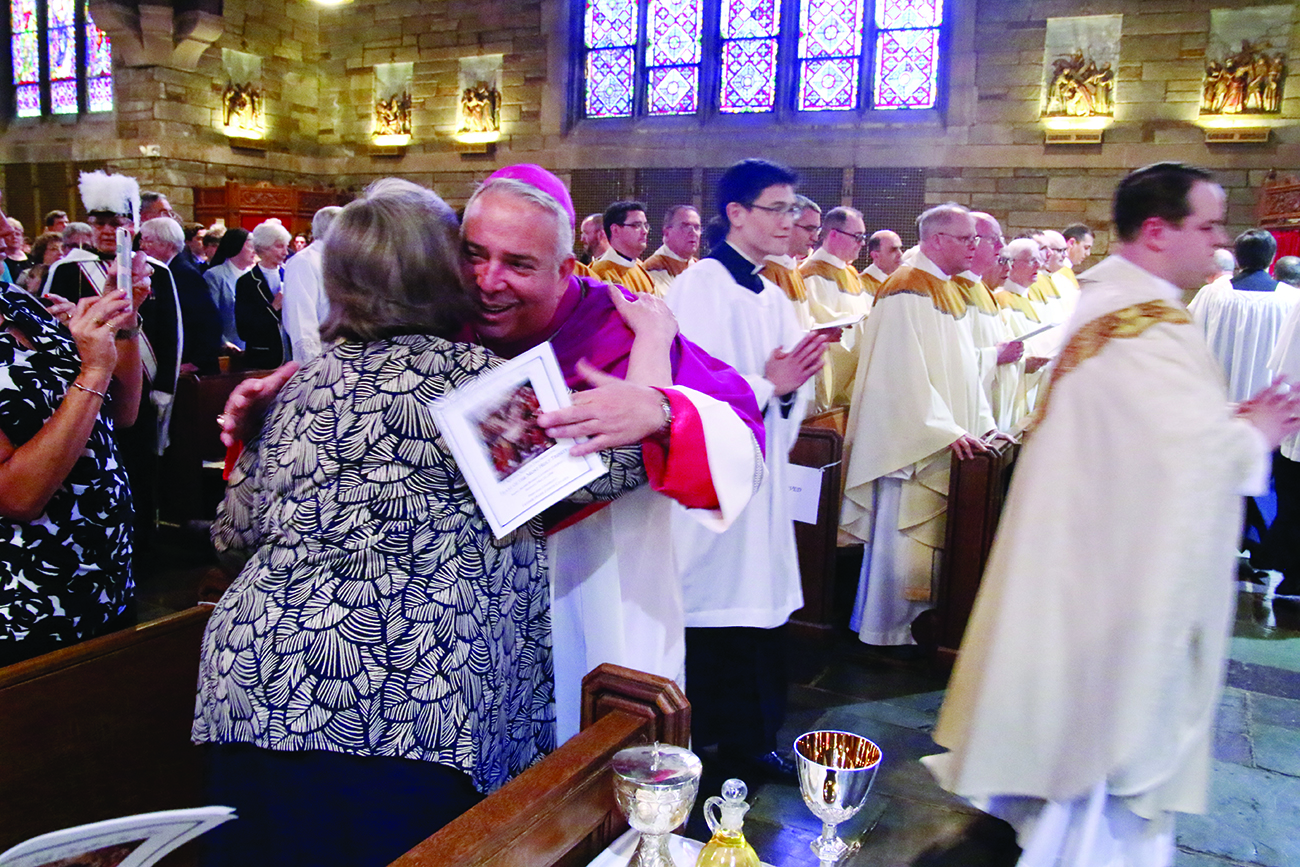 When returning to St. Agnes Parish in West Chester on May 22, 2016, then-Bishop of Cleveland Nelson Perez receives a warm welcome from his former parishioners, including Noreen Cavara, mother of Father Mark Cavara (right), who was celebrating his first Mass. (Sarah Webb)

Although Archbishop Nelson Perez served as pastor of St. Agnes Parish in West Chester nearly a decade ago, the impact he left can still be seen. Now, parishioners are overjoyed to welcome him home to Philadelphia.

Then-Msgr. Perez was appointed pastor of St. Agnes in 2009. Several parishioners were among the last to call him “Father” before he was appointed auxiliary bishop of the Diocese of Rockville Centre on New York’s Long Island in 2012.

Kathy Caliendo, a parishioner of St. Agnes, was asked to speak at Msgr. Perez’s final Mass at St. Agnes as pastor. What struck her about his time at the parish was that despite the short three years, it was incredibly fun.

St. Agnes parishioners describe Archbishop Perez’s personality as energetic, enthusiastic and genuine. Those who served with him on parish council said he’s unafraid to tackle hard issues and has a collaborative leadership style.

These qualities served St. Agnes well. At this time the parish remains one of the oldest in the Philadelphia Archdiocese, marking 227 years, and it’s bucking an archdiocesan trend by seeing an uptick in registered parishioners.

Its location in the heart of the West Chester borough gives St. Agnes an urban character, especially compared to more suburban neighboring parishes. This presents unique joys, strengths and challenges.

Those who worked with Archbishop Perez noted his exceptional gift of surrounding himself with people who had the skills needed to make the parish thrive. He stressed that St. Agnes was their parish, and his role was to strengthen it as succeeding pastors moved in and out.

He organized a parish self-study, which created four pillars intended to guide the parish for the following five years. In addition, he gathered a team of parishioners to create a strategic plan for St. Agnes.

Caliendo called the ethnic diversity of St. Agnes Parish “the strength of the community.”

She said an important part of the strategic plan for Archbishop Perez was not just a “matter of sharing space” but of “bringing people together.” 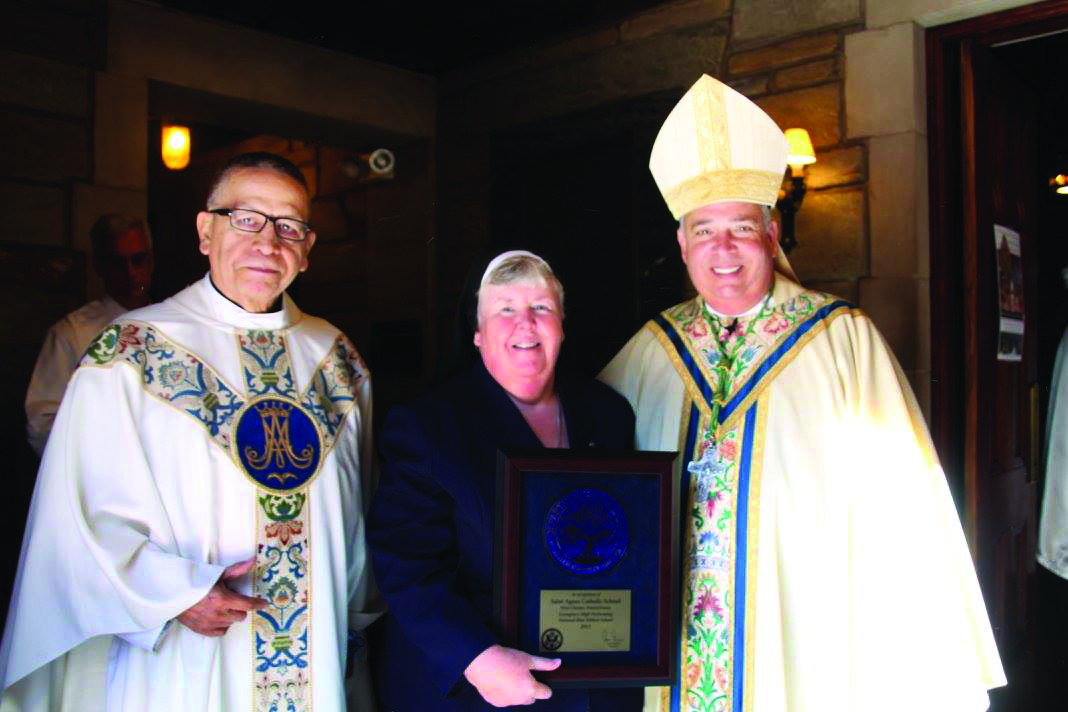 When St. Agnes School was awarded the U.S. Department of Education’s Blue Ribbon of Excellence distinction in 2015, Bishop Nelson Perez returned for a celebration Mass. He is
shown here with Father Alfonso Concha, St. Agnes’ pastor at the time, and Sister Joan Felicia O’Reilly, I.H.M., principal of the school until 2019.

With its large and diverse population, the parish provides many outreach ministries. Maryanne Manley, who was on parish council with Archbishop Perez, recalls he was looking for new ways to improve these ministries and making sure they were sustainable for the future.

“He was definitely a man of action,” said Manley.

He also continued the advisory council for St. Agnes School, which was started by Auxiliary Bishop Edward Deliman during his time as pastor of St. Agnes Parish.

Perhaps the most colorful and concrete of Archbishop Perez’s legacies is seen in St. Agnes School, which serves students in pre-kindergarten through eighth grade. The pastor took special care to give middle school students new responsibilities and opportunities.

Noticing the needs of upper-grade students, he created a space where they would have more responsibility and distinction from the younger students.

Along with fresh paint and flooring, the middle school hallway was lined with lockers so that students can now switch classes and teachers, as happens in public middle schools.

Archbishop Perez gifted the middle school upgrades to students with the enthusiasm and energy that characterizes him. After organizing a pep rally, he made sure students experienced the renovations for the first time together, as a Channel 6 news team covered the excitement.

Sister Joan Felicia O’Reilly, I.H.M., who served as principal of St. Agnes School from 2007-2019, recalls one summer when then-Msgr. Perez surprised each teacher with a new desk. While this gift might seem small to those who work outside education, Sister Joan Felicia stressed its significance for teachers who rarely get new desks.

A goal from the parish self-study was to have St. Agnes School recognized as a National Blue Ribbon School. The pastor and principal were instrumental in the process which involved changes to the curriculum, including teaching Spanish in seventh grade.

Although Archbishop Perez was serving in Rockville Centre when St. Agnes School received its blue ribbon in 2015, he returned to celebrate a Mass of thanksgiving.

Across the years and the miles from Long Island to Cleveland, Archbishop Perez has stayed in touch with St. Agnes parishioners and staff. Sister Joan Felicia recalled the phrase, “he collects friends like flowers,” and believes it describes Archbishop Perez well.

“Even though he has titles, he makes it clear that you can always reach out to him no matter what,” said Manley. She and several other friends from St. Agnes take Archbishop Perez to dinner when he returns to the area every December.

St. Agnes parishioners are excited to welcome their friend back to the archdiocese so soon.

“I hoped and prayed that he would come back to Philadelphia, but (the timing of the move) is really unbelievable,” Manley said.

She recalls getting the news while making her children’s school lunches. She began jumping around the kitchen and shouting with joy.

St. Agnes parishioner and former parish council member Shannon Ercole also remained friends with Archbishop Perez throughout the years. She said she will always treasure what he told her the day after he was announced Archbishop-elect of Philadelphia: “Now Shannon, you know I’ll always be Nelson to you.”

Sister Joan Felicia is confident as she looks forward to Archbishop Perez’s time as Archbishop of Philadelphia.

“He’s a good man, and I know he’ll do a good job for the archdiocese,” she said.