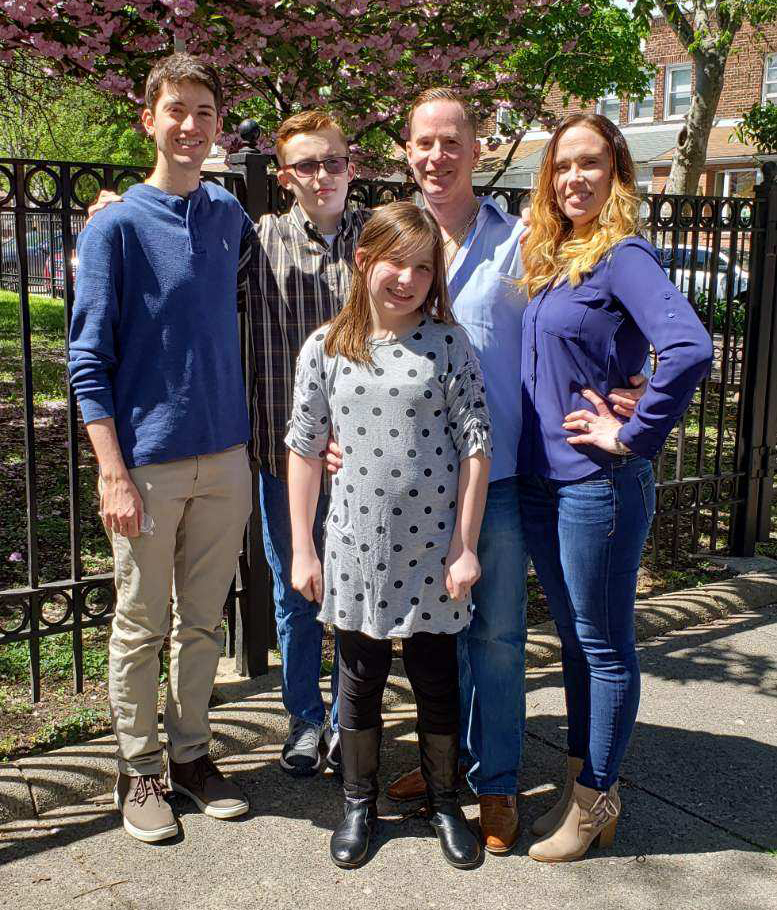 St. Monica parishioners Anthony and Lisa Giordano — pictured with their children Anthony, Carmen and Vienna — have formed a grassroots organization to counter both rising crime and a safe injection site in their South Philadelphia neighborhood. (Photo courtesy of Anthony Giordano)

Philadelphia’s plans to open the nation’s first safe injection site may be on hold, but a South Philadelphia parishioner is putting his faith into action to make sure the project is permanently tabled.

“I can’t wrap my head around how you can give someone the opportunity to legally shoot up illegal narcotics, destroy their bodies, and then tell them they’ll be fine if they overdose since you’ll bring them back,” said Anthony Giordano, a lifelong member of St. Monica Parish.

The nonprofit Safehouse was set to open the site next week at the Constitution Health Plaza on Broad and McKean Streets. The organization was given the green light for the facility, where intravenous users of illegal drugs can self-inject under supervision, following a Feb. 25 ruling by a federal judge.

After public outcry from numerous residents and elected officials, who said Safehouse had not consulted the community about the project, Constitution Health Plaza officials announced on the evening of Feb. 27 that they had cancelled plans to lease space to Safehouse for use as a safe injection site.

Earlier that day, U.S. Attorney William McSwain asked a federal judge to postpone the South Philadelphia opening until an appeal of the Feb. 25 ruling can be heard.

Giordano remains committed to opposing the site, and has said a rally he has organized at the Broad and McKean location, scheduled for Sunday, March 1 at 3 p.m., will proceed.

“We’ve won the battle. We haven’t won the war,” said Giordano in an interview with local media. “I don’t believe that the city’s going to back down. I think they’re going to try to backdoor this someplace else.”

Previously, Safehouse had indicated plans to create an additional site in Kensington, and earlier reports stated that a number of other facilities throughout the city were also being developed.

Too close to children and elderly, residents say

The South Philadelphia area, where Safehouse intended to open its first site, has already been grappling with a recent spike in crime. That prompted Giordano and his wife Lisa to found Stand Up South Philly and Take Our Streets Back.

Now counting almost 8,000 members, the grassroots organization is committed to peaceful activism against violence and other threats to the neighborhood’s quality of life, including safe injection sites, said Giordano.

“You’re only enabling somebody’s habit, disease, addiction, sickness, whatever word you want to use,” he said.

Giordano said residents were distraught not only over the safe injection site’s activities, but its planned location in a complex with businesses that serve young children, the elderly and the sick.

Had the lease not been cancelled, Safehouse’s neighbors would have included a day care center, a special education school for children ages 3 to 5, a dialysis practice, a hearing aid provider and a skilled nursing facility for patients with degenerative neurological disease, as well as an engineering firm that contracts with the military.

“I don’t know how you could bring this to a building with an Elwyn school (for special needs children) in it,” Giordano said, adding the site’s backers failed to account for what happens before and after a drug user self-injects narcotics.

“You’re letting them shoot up in front of you, and then they’ll walk outside, and then what?” he asked. “Who will be responsible when these people leave the site high and get in their vehicles?”

Fears of a spike in crime

Giordano noted that the sites stand to increase criminal activity, which correlates with purchasing and using drugs.

He cited statistics from police in Calgary, Canada, where the immediate area around that city’s safe injection site has witnessed a 276% increase in drug-related police calls, along with a 50% jump in violent crime, a 63% rise in vehicle crime, and at least a 60% hike in break-and-enter crimes.

Although Safehouse backers insisted their site would not foster criminal activity, Calgary law enforcement officials said in 2018 that their city’s facility had prompted a migration of drug users and dealers to the area — something Giordano also expects in Philadelphia, should a site be opened.

“There will be a criminal element outside of Safehouse, with drug dealers practically waving the bags in their faces,” he said.

“Why are we not funneling money to help beat, not feed, addiction?” he said. “This would be like me telling somebody with lung cancer, whose doctor has told them to quit smoking, to come over to my house and smoke.”

Giordano said that he’s seen first-hand how a combination of 12-step meetings and traditional recovery treatments has helped a friend stay sober for the past three years.

Since 2003, only 1.35% of the 3.6 million visits to Vancouver’s safe injection site have resulted in some form of “clinical treatment visits,” according to the facility’s webpage.

Active drug usage precludes individuals from being able to stay at recovery homes, where sobriety is a non-negotiable condition for admission and residence. Moreover, said Giordano, Safehouse would work to give those in addiction a false sense of security regarding their drug use.

“Let’s say someone is ready to beat addiction, and maybe they get that taste for drugs again,” he said. “Then they think, ‘I can go back, since they’ll revive me if I overdose.’”

The faith that informs his activism is the same faith that offers hope for those struggling with addiction, said Giordano.

“Jesus would say, ‘Even if those needles are safe and this place is clean, this isn’t the step to take,’” said Giordano. “He’d tell them, ‘You’re walking in the direction of the devil.”

A relationship with Christ can heal the deep wounds that underlie addiction, said Giordano, who is also an active member of Men of Malvern, a lay prayer group based at Malvern Retreat House.

“He’d say, ‘If you take my hand and walk with me down this road, I will take this demon from you, and hold you in your time of need,’” Giordano said.

PREVIOUS: There’s ‘something about the ashes,’ says Archbishop Perez