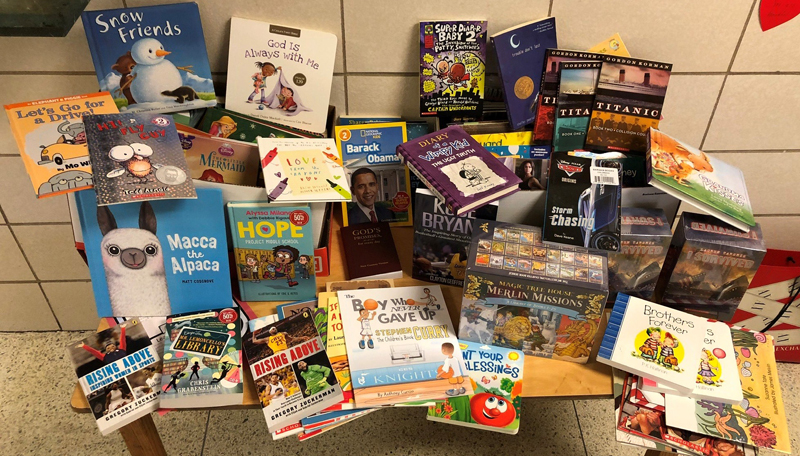 An image shows some of the books that have been collected in a book drive by Our Lady of Hope Regional Catholic School and Tankie's Tavern in South Philadelphia in memory of Salvatore DiNubile. (Photo by Marisa Messina)

As the principal at Our Lady of Hope Regional Catholic School in South Philadelphia, Patricia A. Cody prides herself on helming a family-centered school. Her extended flock, therefore, suffered an irreparable setback Oct. 24, 2017 through the loss of alumnus Salvatore DiNubile in a gunfire incident only two blocks from the school.

Still seeking to lessen their combined pain, Cody and DiNubile’s relatives are overseeing a book drive in memory of their loved one, with the latter doing so through their restaurant whose name is a tribute to Salvatore.

“His death rocked us to the core,” Cody said of the matter that took away a young man who had the respect of numerous community members. “Everyone felt like a better person when in his presence because he had such a great heart.”

That heart stopped as a result of ill will that another local teen had developed toward DiNubile, whom many knew as “Tankie.” The perpetrator received a lengthy sentence in July 2019, one month after Tankie’s Tavern opened in South Philadelphia as a culinary tribute to the figure who would have celebrated his 19th birthday this past Valentine’s Day.

On Feb. 7, a week ahead of that sad reminder of his death, Our Lady of Hope and the eatery began the book drive, with Cody spearheading the school’s participation and DiNubile’s sister, Ciarra Bianculli, leading the tavern’s involvement.

“With this book drive, we hope to be able to use his love for reading and education to promote a positive union of the community with his name that impacts and gives back to students at a school that gave him and his family so much,” Bianculli said of her brother.

She and Joseph Messina, a dear childhood friend of DiNubile and another product of Our Lady of Hope, were instrumental in pitching the drive to Cody, who thought such a concept would serve as a perfect nod to the youngster’s penchant for pages.

“He loved to read so much and so often that there were times where he needed to be told to put his books down so as to tend to other matters in school,” the principal said with a laugh of the prized pupil who had been attending St. Joseph’s Preparatory School at the time of his death.

Running through March 6, the drive is going to endow Our Lady of Hope with numerous new titles that it will be adding to its library.

This will enable the school, based in South Philadelphia’s Lower Moyamensing neighborhood, to replace many of the 2,500 existing options with a combination of contemporary works and esteemed volumes that Cody hopes will give the student body an appreciation for the classics. Many, according to Bianculli, will also prove affirmations of the school’s Catholic identity.

“We have been so very thankful for all of the support so far,” she beamed. “It is so great to see the community come together for Our Lady of Hope’s library. We are receiving huge bags of books at the tavern almost every day and even have received many monetary donations, too.”

Having already established a memorial to DiNubile within the school, Cody and her staff find themselves eager to call on his memory to enhance their students’ desire to read.

Soon after the drive’s conclusion, members of the National Junior Honor Society will deem the books as library components by labeling each in honor of DiNubile, with the message “Love Fiercely,” which also appears on a Tankie’s Tavern mural.

“We will always remember the caliber of a student like Tankie,” Cody said. “Through the book drive, we’re going to make it more obvious that although we are grieving and will be for some time, we’re happy that he touched our lives in so many ways.”

To contribute new books to the drive, contact Our Lady of Hope Regional Catholic School at 215-467-5385; call Tankie’s Tavern at 215-800-1778 or bring materials there in person, 1720 W. Moyamensing Ave.; or contact Ciarra Bianculli at ciarrabianculli@gmail.com or Joseph Messina at jmess0607@aol.com.

NEXT: Students celebrate African-American saints in the making