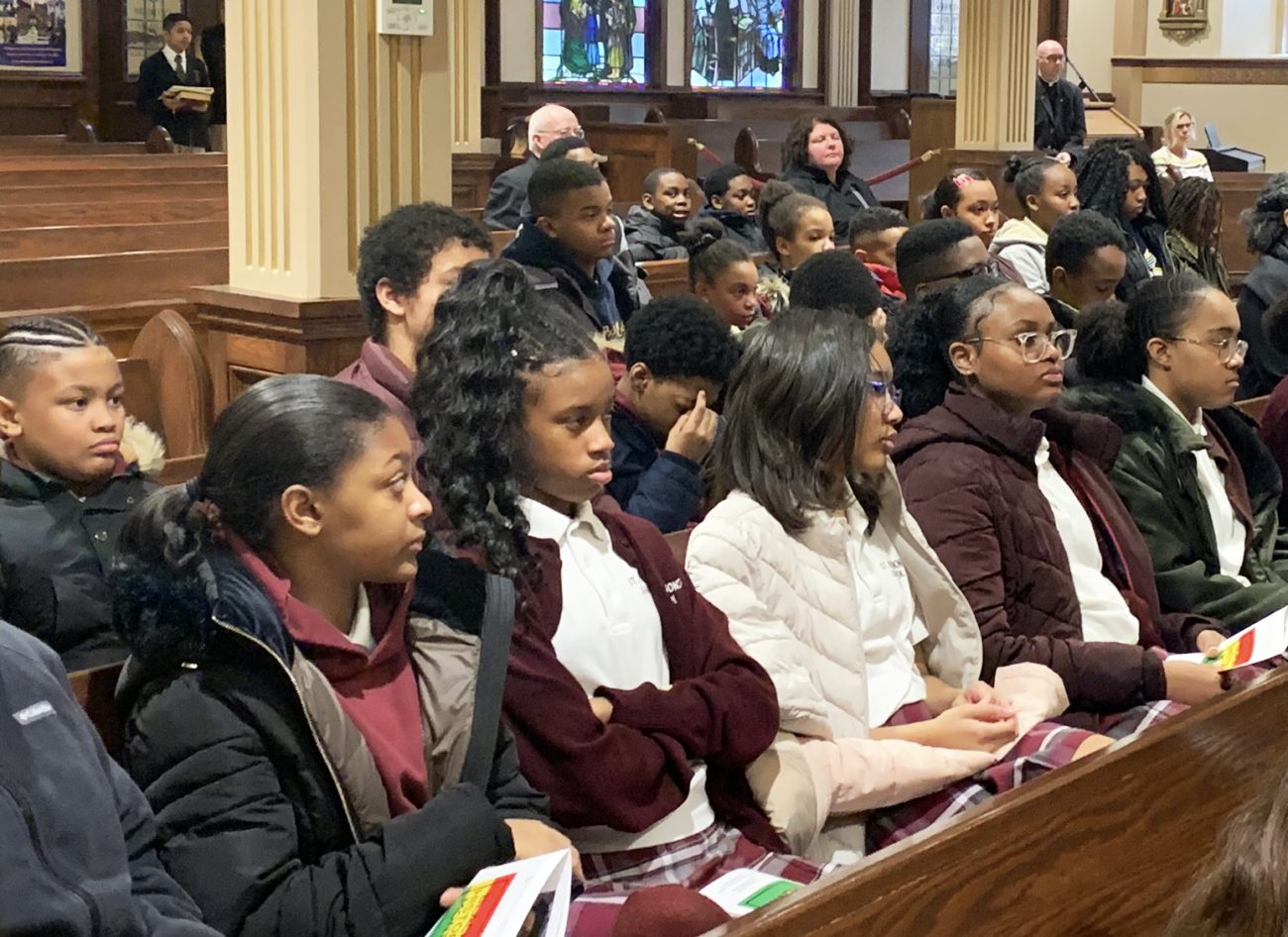 Students from various Catholic schools listen to a presentation on six African-American candidates for sainthood during a prayer service at the Shrine of St. John Neumann in Philadelphia. The gathering was organized by the archdiocesan Office for Black Catholics as part of its Black History Month observance. (Photo by Gina Christian)

Students from several area Catholic schools wrapped up Black History Month in February by celebrating the lives of six African-American Catholics now on the path to sainthood.

More than 125 participants gathered at the Shrine of St. John Neumann (located at St. Peter the Apostle Church in Philadelphia) for a Feb. 25 prayer service sponsored by the archdiocesan Office for Black Catholics.

“During Black History Month, we raise up the memory of African-Americans whose lives inspire us to live out our baptismal call as Christians,” said Capuchin Father Richard Owens, the office’s director. “Together we ask for the intercession of these men and women who have gone before us, and whose lives exemplify for us what it means to be a Christian.”

Displayed in the sanctuary were banner portraits of the event’s honorees: Venerable Pierre Toussaint (1776-1853), a former slave who became an entrepreneur and philanthropist; Mother Mary Elizabeth Lange (1784-1882), foundress of the Oblate Sisters of Providence; Venerable Henriette Delille (1813-1862), foundress of the Congregation of the Sisters of the Holy Family; Julia Greeley (born between 1833 and 1848; died 1918), a former slave who promoted devotion to the Sacred Heart of Jesus; Sister Thea Bowman (1937-1990), who converted to Catholicism as a child and entered religious life as a Franciscan Sister of Perpetual Adoration; and Venerable Augustus Tolton (1854-1897), a former slave who became the first known black Roman Catholic priest from the United States.

Dr. Tia Pratt, director of the Martin de Porres Foundation, said that the six honorees had exhibited “the joy, pain and resilience that exemplifies the black Catholic experience.”

In addition, said Pratt, the lives of the sainthood candidates “(illustrated) the intersection between black History, Catholic history and American history.” 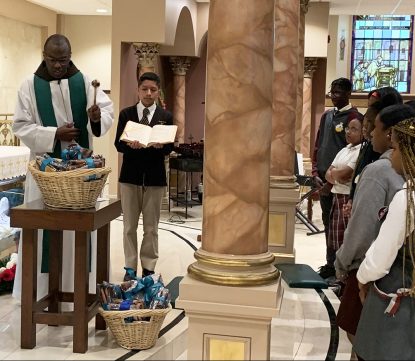 Capuchin Father Richard Owens, director of the archdiocesan Office for Black Catholics, blesses banner portraits of six African-American sainthood candidates during a Feb. 25 prayer service at the Shrine of St. John Neumann in Philadelphia. Students from a dozen area Catholic schools received the banners for use at liturgies and events. (Gina Christian)

While the Catholic Church already recognizes several black saints – among them, St. Martin de Porres, St. Benedict the Moor, St. Charles Lwanga and the Ugandan martyrs, and St. Josephine Bakhita – as yet no black individuals from the U.S. have been canonized.

“One of today’s honorees could change that,” said Pratt, noting that “the importance of having a black saint from the U.S. cannot be overstated.”

Citing the “systemic racism that continues to plague the Catholic Church,” Pratt said that canonization of the honorees would mark “a significant step towards breaking the myth that there are no Black Catholics.”

Pratt said the banners, designed for use at Masses and special events, would serve as “a reminder that representation matters.”

“I always tell the kids that we’re black every day, so we need to celebrate that every day,” she said.

For St. Raymond eighth grader Angie Swift, the prayer service was a “fun” way to celebrate the sainthood candidates, as well as a challenge to “talk about them more.”

“On the way home from school, I pray to him to make sure nothing happens to me,” said Hunt, now in grade six at St. Raymond.

The youth also said they enjoyed the service’s mixture of Scripture and intercessory prayer, along with the music provided by Tonya Taylor-Dorsey, director of the Philadelphia Catholic Gospel Mass Choir; Micah Jackson; Ebony Porter; and Douglas Stanford.

Father Owens said that he remains optimistic about efforts to counter racism in society and within the Catholic Church.

Noting that “there’s always work to be done,” he said that the U.S. bishops’ recent pastoral letter on racism, along with events such as the Feb. 25 prayer service, are steps in the right direction.

“So I think there’s definitely hope,” said Father Owens, thanks to “events like this one, and the pastoral letter, and the many other ways in which we’re dialoguing and trying to promote diversity and inclusion in the Catholic Church.” 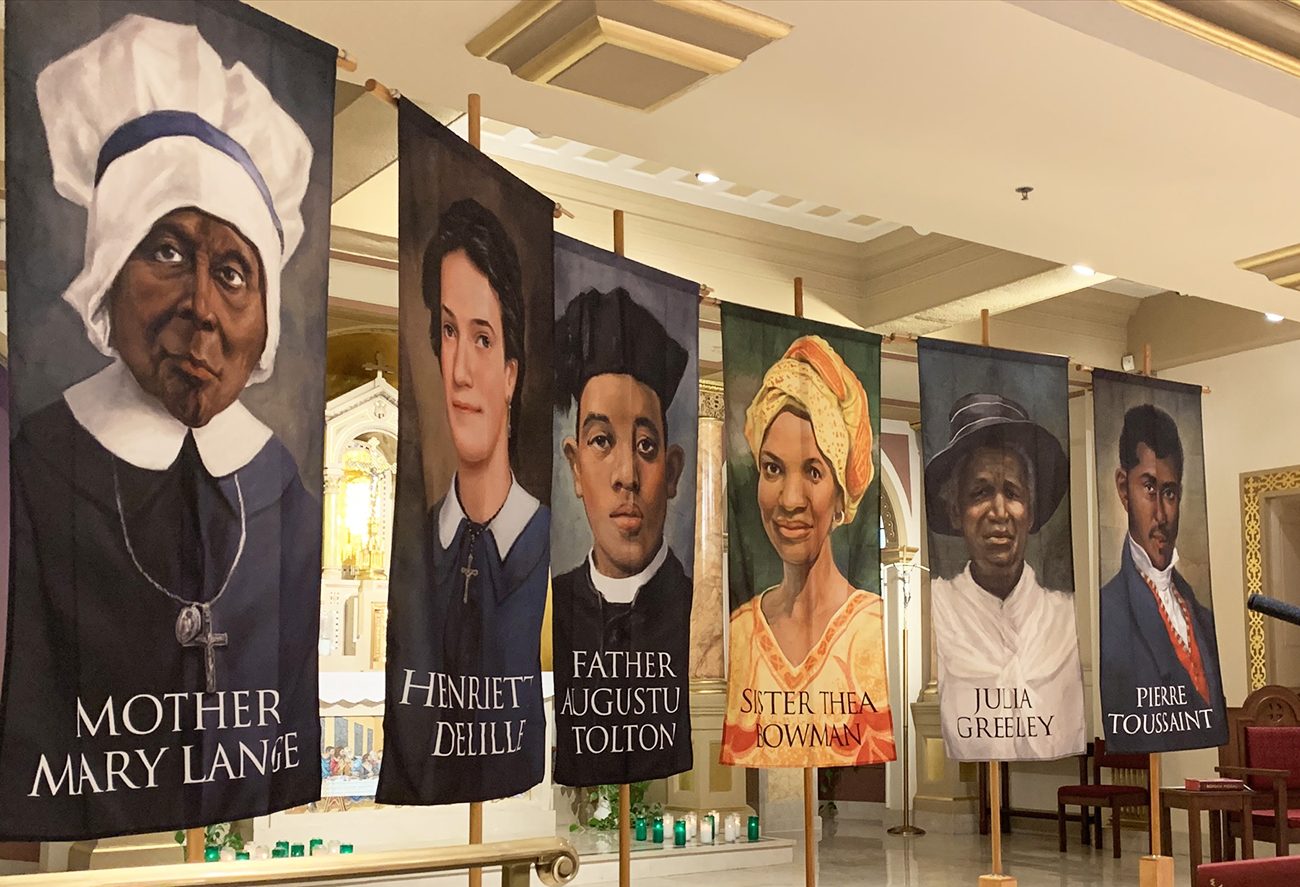 Banners of six African-American candidates for sainthood were displayed during a Feb. 25 prayer service at the Shrine of St. John Neumann, organized by the archdiocesan Office for Black Catholics. (Gina Christian)