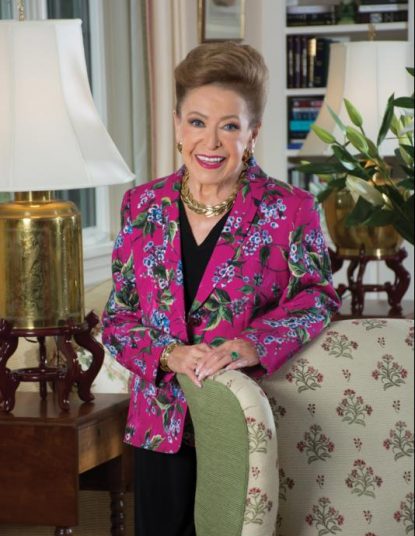 TORONTO (CNS) — Mary Higgins Clark, known as the “queen of suspense” to her millions of readers throughout the world, died of natural causes in Naples, Florida, Jan. 31. She was 92.

The author of more than 50 novels, the popular New York-born author is also remembered for her strong Catholic upbringing and the way she portrayed courageous Catholic heroines in the bulk of her fiction.

Higgins Clark was raised at St. Francis Xavier School and Parish in the Bronx, a borough of New York City, and attended high school at Villa Maria Academy, where one-time principal Mother St. Margaret of the Angels encouraged her first efforts at storytelling.

Coinciding with the release of the “Kiss the Girls and Make Them Die” book, Catholic News Service in November profiled Higgins Clark as one of most widely read authors in its Catholic writer series.

In that profile, Higgins Clark outlined her use of strong Catholic protagonists who persevere against danger and intrigue to carry on in life’s daily struggles.

She explained her rationale for character-building in her November profile. “As far as my use of Catholic protagonists and heroines, I attribute that to the best piece of advice I ever received as a young writer in a workshop. The professor said, ‘Write what you know,'” Higgins Clark said at the time. “I’d grown up observing examples of Catholic women who were strong figures and persevered against difficult odds. It was natural to model my characters after the people I knew.”

Prior to finding her niche as a suspense writer, Higgins Clark struggled to raise five children as a single parent in New York City. Widowed in her mid-30s, Higgins Clark wrote radio scripts and later found work as an airline flight attendant before striking success in 1975 with her first big-selling book, “Where Are the Children?” Buoyed by that success, Higgins Clark turned to full-time writing and enjoyed astonishing success.

Msgr. Frank Del Prete, pastor of St. Gabriel the Archangel Parish in Saddle River, New Jersey, remembers Higgins Clark not only as a talented writer but also as a lively, committed parishioner.

“Mary was a faith filled, active parishioner at St. Gabriel’s. When she came to Mass, she sat in the front row,” he told CNS Feb. 1. “Mary’s faith sustained her during the difficult moments of her life. In recent months, when her illness prevented her from coming to Mass, it really bothered her that she was not able to attend.”

Father Del Prete, who was himself portrayed as “Father Fred” in the late author’s “I’ve Got My Eyes on You,” published in 2018, also described Higgins Clark as a great storyteller with a sophisticated sense of humor.

“I always enjoyed the way Mary was able to weave the local area and people in her books,” Father Del Prete said. “Since her faith was so important to her, she wanted people to know this through her books. She was very proud to be a Catholic.”

In a Jan. 31 statement, Michael Korda, Higgins Clark’s editor at Simon & Schuster for the last 45 years, said the writer had a keen appreciation for her international readership.

“She was unique. Nobody ever bonded more completely with her readers than Mary did. She understood them as if they were members of her own family,” Korda said. “She was always absolutely sure of what they wanted to read — and, perhaps more important, what they didn’t want to read. She was the queen of suspense; it wasn’t just a phrase.

“She always set out to end each chapter on a note of suspense, so you had to keep reading.”