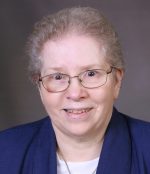 Sister Marian Russo, an Adorer of the Blood of Christ, died Feb. 1 at the Ruma Center, Ruma, Illinois. She was 76 years old and had been a professed member of the Adorers for 51 years.

Sister Marian was born Dec. 4, 1943 in Philadelphia to Marian Alice Russo and Gaston Strenck. She and her brother, Arthur Russo, were raised by foster parents, Nellie and Manus McGinley. She made her first profession on July 1, 1968 and her final vows on Aug. 15, 1973.

She taught elementary school at St. Rochus in Johnstown, Pa. and St. Jerome in Chicago. She taught typing, shorthand and bookkeeping at St. Joseph Academy in Columbia, Pa. and also performed secretarial and office duties there for many years.

She also assisted the provincial secretary and the director of the Precious Blood Spirituality Center in Columbia and served as archivist for the former province of Columbia.

For several years, Sister Marian worked as an administrative assistant with the Archdiocese of Chicago’s Marriage Tribunal Office for Canonical Services. She also volunteered as a librarian in Mountville, Pa., and helped process sisters’ medical claims at the ASC Mission Center’s finance office in St. Louis.

Sister Marian is survived by her mother, Marian Alice Russo Steele, and her brother, Arthur Russo. She was preceded in death by her foster parents, and also by her step-father, Harold Steele.

The funeral Mass was Feb. 7 in the chapel at St. Anne’s Retirement Community in Columbia. Burial followed in the convent cemetery.

Additionally, a memorial service was held Feb. 12 at the Ruma Center, in Ruma, Illinois, where she lived her last years of life.

Donations in memory of Sister Marian Russo may be sent to the Adorers at 4233 Sulphur Avenue, St. Louis, MO 63109 or made online at www.adorers.org.