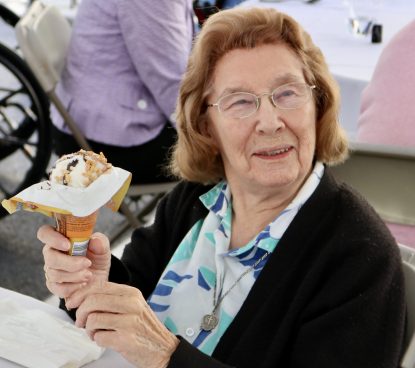 Sister Maureen Widmeier, S.H.C.J., who was a Sister of the Holy Child Jesus for 72 years, died Jan. 30 on her 97th birthday from complications of the flu at Holy Child Center in Rosemont.

Born and raised in the Fairhill section of Philadelphia, Sister Maureen was the ninth of 13 children. She first came to know and love the Sisters of the Holy Child Jesus while a student at St. Edward School. Three years after graduating from John W. Hallahan Catholic Girls High School, she entered the Society, as her older sister, Elizabeth (Mother Mary Flavia), had done 10 years earlier.

She became well known by her religious name Mother Maureen.

As a teacher, Sister Maureen excelled with younger children. Her teaching ministry of almost 30 years took her to several schools including those in Massachusetts, Oregon, Portland, California and New York.

In addition to teaching, Sister Maureen continued her education and earned a Bachelor of Science degree in education from Villanova University, in 1953, a master’s in theology from St. Mary College in San Francisco in 1971 and a license in massage therapy.

She spent a sabbatical year at Trinity College in Washington, D.C., which brought a new focus to her ministry.

She became involved in parish social services at Ascension of Our Lord Parish in Philadelphia and served as a dedicated volunteer at the Archdiocese of Philadelphia’s Nutritional Development Services for almost two decades.

Later in life, Sister Maureen combined contemplation and action in North Philadelphia, where she ministered at St. Francis Inn. She officially retired from active ministry at age 94.

Sister Maureen’s love of prayer had been a constant throughout her life. She was always one to offer a quick joke or riddle to friends and strangers and enjoyed introducing herself as “MoWid,” for Sister Maureen Widmeier. Sister Maureen’s spirit and zeal will be missed.

The funeral Mass was celebrated Feb. 5 at Holy Child Chapel in Rosemont.

In lieu of flowers, memorial donations may be sent to the Society of the Holy Child Jesus – American Province, 1341 Montgomery Avenue, Rosemont, PA 19010, or donate online at www.shcj.org/american/donate.