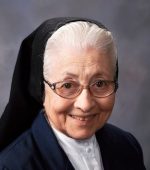 Sister Mary Rachel Torrieri, I.H.M. (formerly Caroline Torrieri), died Feb. 1 in Camilla Hall, Immaculata. She was 99 and in the 78th year of her religious life.

Caroline Maria Torrieri was born on Sept. 16, 1920 in Italy to her parents Dominic and Maggiorina (Negro) Torrieri.

She entered the Sisters, Servants of the Immaculate Heart of Mary on Aug. 15, 1941. She received her habit and religious name, Sister Mary Rachel, the following year and professed her first vows on Aug. 15, 1944.

At age 86, Sister Mary Rachel’s next and final assignment was to serve her sisters in Camilla Hall via prayer, companionship and pleasantry until her death.

Present at Sister Mary Rachel’s funeral liturgy were her loving community of sisters at Camilla Hall, many of the sisters who serve in Hispanic ministry, and her congregation of I.H.M. Sisters.

Sister Mary Rachel is predeceased by her parents and by siblings Peter (Mary), John (Rose), and Anna Taglianetti (Robert).