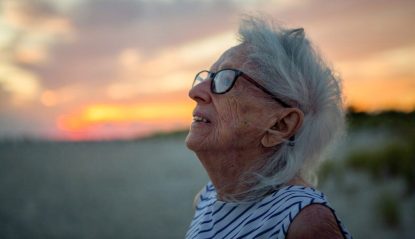 Sister Teresita led a long life shaped by her passion for social justice. It was her Catholic family who nurtured her confidence that she could make a difference in the world. Reflecting on her childhood, she said, “I was blessed with great parents who believed change was possible. You could do anything you wanted to do.”

After graduating from St. Hubert High School for Girls in Philadelphia, Sister Teresita entered the Medical Mission Sisters in 1948. She became a registered nurse at St. Francis College before beginning 14 years of mission in Bangladesh.

In addition to becoming a registered midwife at Holy Family Hospital (HFH) in Dacca, she served as nursing supervisor for six years and held several administrative positions at St. Michael’s Hospital. She returned to the United States in 1969 where she served as her Society’s Eastern District Supervisor.

Sister Teresita divided her time between helping her sister, a single mother of two, and working as a nurse-midwife in a Philadelphia community center. Both experiences allowed Sister Teresita to see how women were impacted by bureaucratic dysfunction, which inspired her to study social work at Temple University, where she earned both a bachelor’s and master’s degree in Social Work Administration.

She served as administrator of St. Vincent’s Hospital, where she introduced a nurse-midwifery program, and she later spent several years as a nurse-midwife at the Southeast Philadelphia Neighborhood Health Center, before becoming director of nurse-midwifery at Dover General Hospital in New Jersey.

Sister Teresita, who became the first nurse-midwife to deliver a baby in Pennsylvania Hospital in 1974, was later appointed to the mayor’s task force in Philadelphia and used her position to successfully advocate for more nurse-midwives in Philadelphia health centers.

In 1982, Sister Teresita joined the faculty at the University of Pennsylvania School of Nursing, where she taught for 20 years. She established the Nurse-Midwifery Distance Learning Training Program for the recruitment and training of certified nurse-midwives in underserved areas of rural Pennsylvania. She also taught a course called “Public Policy and Access to Health Care for the Poor.”

Dr. Kimberly K. Trout, a former student of Sister Teresita, said, “Sister Teresita inspired her students to have a passion for caring for the poor. She continually emphasized that there should be no distinction between those whom society renders as the ‘deserving poor’ or the ‘undeserving poor.’ Teresita let us know that we are called simply to serve, not to judge.”

Upon retiring from Penn, Sister Teresita remained deeply concerned with the condition of women. After attending a bishops’ conference on refugees, Sister Teresita developed a deep interest in the fight against human trafficking.

She was especially interested in learning about the violence faced by vulnerable immigrant and refugee women. In 2007, she opened the Center for the Empowerment of Women and Girls in Philadelphia. That same year, she cofounded Dawn’s Place, a safe home for trafficked and exploited women.

Sister Teresita was honored with many awards, including an Award of Excellence from the American College of Nurse-Midwives in 1994. She received an honorary degree of Doctor of Medical Science from Villanova University in 2009 and was invited by the Pennsylvania Joint State Government Commission to be member of an advisory committee studying the problem of human trafficking in the state.

In 2013, she became the first religious sister to offer the opening invocation at a session of the Pennsylvania House of Representatives, an honor usually reserved for ordained clergy members.

Even after retiring from her position with Dawn’s Place, Sister Teresita remained keenly interested in women’s issues, particularly the role of harmful cultural norms in influencing the devaluation of women and girls. In her view, this problem was at the root of the gendered violence and exploitation endured by so many around the world.

Until weeks before her passing, Sister Teresita continued to work on her film project and was actively involved in advocacy work in the fight against human trafficking and other forms of exploitation.

Throughout her life, Sister Teresita explored the root of a problem and develop creative, workable solutions. In a recent interview, she said, “I get a little impatient with a lot of talk and no action!”

Sister Teresita leaves a legacy of policy change, educational opportunities, safe housing for exploited women and the gift of courage and hope in her quest to help women and children.

NEXT: Sister Winifred Tormey dies at 85