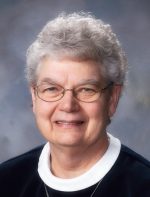 The daughter of parents George and Anne (Devenny) raised their children Anne Marie, Joan and John in St. Martin of Tours Parish in Philadelphia. She attended the parish school and was a 1963 graduate of Little Flower High School.

She entered the the Sisters, Servants of the Immaculate Heart of Mary on Sept. 8, 1963. She received her religious habit and religious name, Sister Marie Georgeanne, on June 27, 1964 and pronounced her first vows on June 28, 1966. She opted to return to the use of her baptismal name in the late 1980s.

While in the I.H.M. community, she earned degrees at Immaculata University and Villanova University.

She went to LaPlanicie, Peru in 1973 where she taught students on the high school level until 1978. When she returned from South America, she taught at Villa Maria Academy for two years.

Once again, community leadership asked Sister Anne Marie to return to South America, this time to Santiago, Chile. There she served children as a high school religion instructor, a business English instructor and as activities staff member. She returned the United States in 1992 where she served the elderly and infirm sisters in Camilla Hall for a year.

Following that assignment she went to Immaculata University to serve at the Student Life Center.

Sister Anne Marie is survived by her brother John (Barbara), her sister Joan, her nephew Peter and many loving cousins, friends, her I.H.M. Community at Gillet Convent, Immaculata University and her Congregation of I.H.M. Sisters.