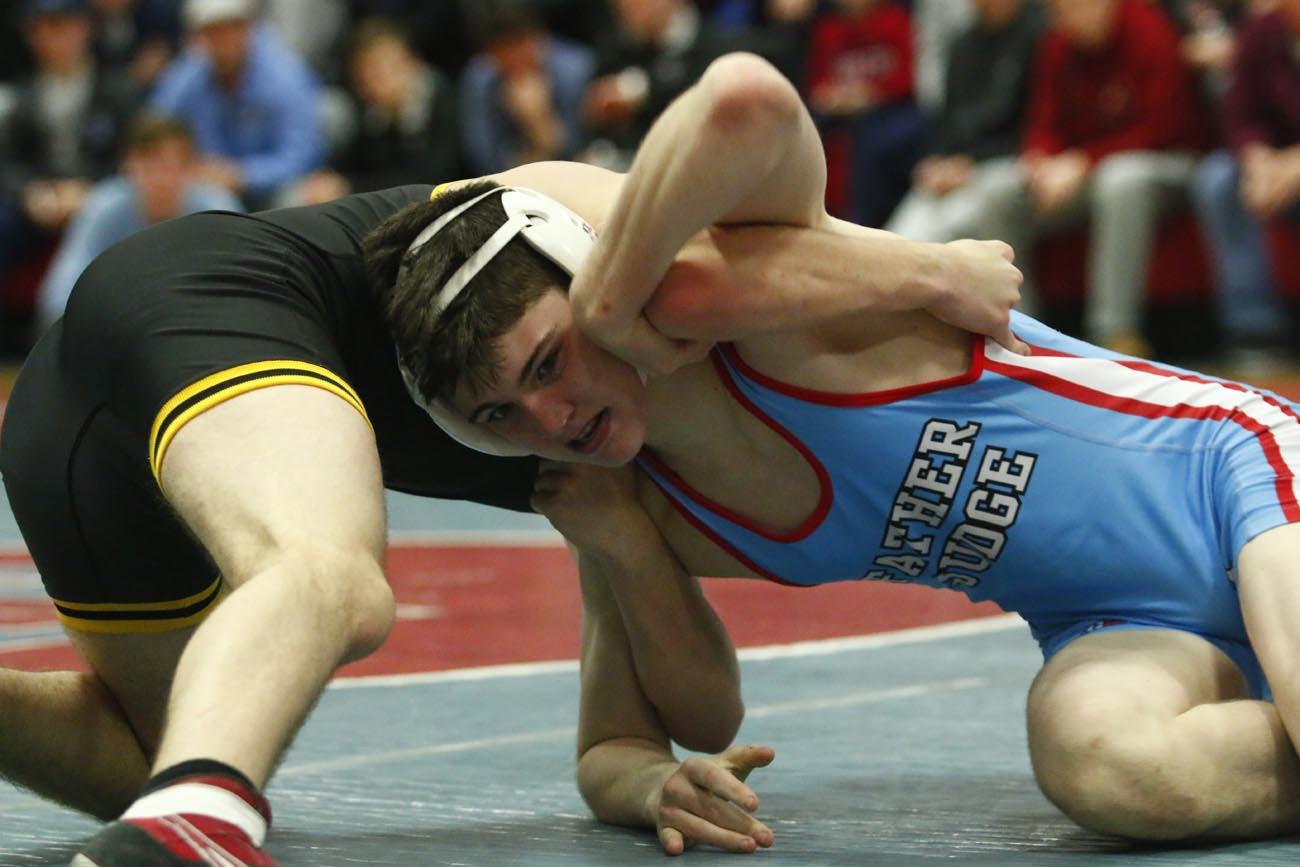 A member of Father Judge High School’s wrestling team competes in this 2017 file photo. The team pinned its second straight Catholic League title on Jan. 28, the fifth in seven years, sparking talk of a “wrestling dynasty” at the school. (Photo by Sarah Webb)

The season had just come to a close with a loss in the first round of the PIAA state tournament. The disappointment of defeat, however, did not sting too much. After all, the number one goal had already been accomplished a week earlier.

So when Father Judge’s wrestling team looks back on the 2019-20 season, it will immediately smile collectively. That’s one of the cool derivatives of winning a Catholic League championship the way the Crusaders did on Jan. 28.

Since the title was Father Judge’s second straight, fourth in the past five seasons, and fifth in the last seven, the word “dynasty” has crept into the conversation. It might want to grab a chair and stay a while.

“This is pretty tough talking about our success as a program,” said Jim Savage, Father Judge’s coach since 2011. “I think the success we have had is a byproduct of the goals that the individuals set for themselves.

“The wrestlers are constantly challenging themselves. They challenge themselves in the weight room, the wrestling room, and the classroom.  Many have extremely high goals and are willing to make huge sacrifices to accomplish them.”

“We just put in the work every day and don’t stray away from any challenge,” said Logue. “We work hard in the practice room, so it feels good when results translate on the mat. We have a really good community of coaches and alum who give back and help the program.”

Numerous wrestling alumni were in attendance at Archbishop Ryan when the Crusaders edged the host Raiders, 36-28, to successfully defend their crown. A seesaw affair that literally came down to the final bout, the match symbolized the neighborhood rivalry between two programs that fight doggedly to beat one another for a year of braggers’ rights.

With Judge leading by 30-28, the winner of the 182-pound event would tip the scales.  With the crowd at a fever pitch, Crusader senior Brenden Spicer pinned his opponent in three minutes, 43 seconds to clinch a 36-28 victory and guarantee yet another plaque to be placed inside the Father Judge school trophy case.

“I just went out knowing I had a job to get done,” said Spicer. “The pressure was definitely high knowing you have to go out and get the win, but I knew what had to be done and I was confident I could do that. It was definitely a memorable experience.”

“Our win against Ryan couldn’t have been possible if it weren’t for how hard our guys fought and what it really meant for them to be PCL champs,” said Lage. “Also, we wouldn’t be the team we are if it weren’t for the way our coaches push us to be better and learn from our mistakes and how they change the true meaning of wrestling.”

For the tough-luck Raiders, who have lost each of the last three finals and had defeated Judge by 48-33 three weeks before the championship, Dillon Shamanow (decision at 195), Junior Orantes (pin at 285), Ricky Horger (major decision at 120), Nick Rehfuss (decision at 138), Matt Weinberg (pin at 145), and Jonathan Swift (pin at 152) supplied individual wins.

Both teams eventually won a district championship before falling in the first round of states.

“It felt great to win it as a senior, and this year was definitely the most special of them all,” said aforementioned Eamonn Logue. “Not only was the crowd electrifying, but also it was a very close match, which made it exciting.

“Personally, I really tried to take it all in and enjoy the moment, as it would be my last PCL finals’ appearance. The crowd, the rivalry, the team effort . . . it was everything amazing about high school sports.”

“I have had an opportunity to work with such dedicated student-athletes and assistant coaches over the years,” said Savage. “I feel blessed.”

NEXT: Two PCL giants to meet in finals on Monday