On Monday, Feb. 24, that imposing number will increase to 53.

Before a packed house at the famed Palestra on Feb. 19, both squads took care of business in the semifinals. Five-seed Roman (16-8 overall) snared a huge lead over top-seed Archbishop Wood (19-5) but had to hold on for an 83-73 victory. Three-seed Neumann-Goretti (20-4) followed with a 51-41 win over seven-seed Archbishop Ryan (16-9).

When the two teams return to the Palestra to meet in the 8:15 p.m. final, it will mark Roman’s fifth trip to the championship in six years and Neumann-Goretti’s 10th since 2009.

The Cahillites have won the last two crowns and have garnered 32 altogether; seeking their 21st title, the Saints have been blanked since corralling six straight between 2009 and 2014.

“It wasn’t one of our best games,” said Neumann-Goretti coach Carl Arrigale, who is tied with former Roman Catholic coach Dennis Seddon for the most titles with 10. “All in all, though, it’s the old saying, you don’t apologize for winning. It doesn’t matter how, just as long as you do. We have another game to play.”

As Arrigale admitted, the Saints’ win over Archbishop Ryan wasn’t pretty. N-G struggled with its shooting and was unable to distance itself from a passionate Raiders team that was coming off a shocking upset of two-seed Bishop McDevitt in the quarterfinals.

Making up for their lack of accurate marksmanship, the Saints amassed a 36-27 advantage in rebounding. Senior Jordan Hall (12 points, 11 rebounds, six assists, three steals), senior Cameron Young (10 points and 14 rebounds), senior Hakim Byrd (nine points, four boards, four assists), and junior Hysier Miller (14 points, four rebounds) were too much for the shorthanded Raiders, whose top scorer, Aaron Lemon-Warren, has been sidelined since the middle of the season.

Now the Saints take on the Cahillites. Arrigale downplayed its significance.

“You got to play somebody in the final,” said Arrigale. “This was one of our goals. Obviously you want to close the deal, but you don’t have a chance to do that if you’re not there.” 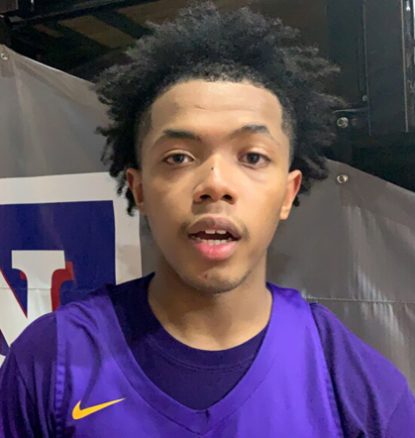 Meanwhile, Roman Catholic will try to become only the first team since 2002 and second since 1988 to win the Catholic League title with four or more league losses. That, however, is misleading when considering that of Roman’s four losses, one was in overtime and two were in double overtime, including a 77-69 loss at Neumann-Goretti on Jan. 17.

The Cahillites couldn’t care less about the regular season.

“It’s not how you start,” said senior Nasir Lett, who contributed eight points and three assists in 26 minutes, “it’s how you finish.”

But the Vikings forced the Cahillites into several turnovers and, combined with a sensational effort by junior Catholic League Most Valuable Player Rahsool Diggins (35 points, including a Catholic League championship-record 20 in the fourth quarter), crept to within 59-51 and 78-71, but Roman survived the spirited rally.

“We’ve played here before,” said Duren. “Not just that, we’ve also been playing on the AAU circuit and in other leagues. We’ve seen stuff, and even though we know other guys haven’t, we know we have to step up our leadership and talk them through the game. They might be a little shaky and nervous, but they know we need them and they have to stick with it.”

“Their confidence in me really helps,” said Brown. “You have to play your game. Sometimes that might be conservative, sometimes aggressive. Winning this game and getting to the championship means a lot. We got off to a good start and then made sure we held on to our lead.”

“We not only lost points, rebounds, and things like that, but also leadership,” said Griffin. “Our big focus for this year has been leadership and developing that. I’m just really proud of these guys, because every day they have improved. Their growth has been amazing.”

NEXT: League’s two best, Wood and West, meet in championship