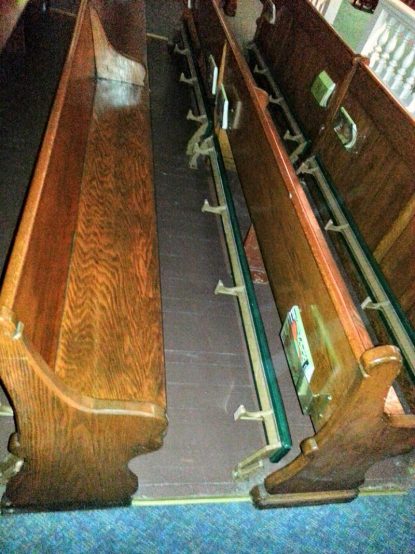 The second pew on the right side of the Maternity B.V.M. Old Church is where St. Katharine Drexel and her sisters sat every week for Mass in the late 1800s.

St. Katharine Drexel was as simple, strong and sturdy as the old Philadelphia church building she attended back in the latter half of the 19th century. Early each Sunday morning she hitched up her horse and buggy from her home and took a long ride into town.

“Town” in this case was to Maternity B.V.M. Parish, nestled in the Pennypack Woods in the mostly farmlands and dirt roads of Bustleton, now Northeast Philadelphia.

It wasn’t all that much different from the rides seen on TV westerns such as “The Big Valley,” “Bonanza” or “Little House on the Prairie.” Except that Katharine Drexel didn’t have Michael Landon or Lee Majors to accompany her.

She simply took a three-hour ride to a simple church to do what she loved doing most in life — celebrate a simple Mass of thanks for the God she dearly loved and to whom she dedicated her life.

That exact same simple Old Church was the setting for the start of the 150th anniversary of Maternity B.V.M. parish recently. The parish launched the start of its year-long celebration with a Mass last year on Oct. 2 — the day Maternity broke ground on the building of the Old Church in 1870.

The 2019 version was as beautifully simple as were the Masses celebrated in those immediate post-Civil War days. There were no lights, no electricity. Just lamp posts to light up the small church.

There was no air conditioning to cool what would turn out to be a record-breaking 95-degree October day. Nor any microphones for the pastor, Father Paul Quinter, to speak into when he described the day that the parish began in 1870 and the continuing resilience of the people of B.V.M. over the last century and a half.

Father Quinter, a journalism major from Columbia University and a longtime editor of The Catholic Standard and Times (forerunner of CatholicPhilly.com), read the account that appeared in The Standard in October 1870 concerning that groundbreaking.

After humorously acknowledging the differences in journalism prose from the 1870s and present day, he fielded comments from the parishioners on what they considered to be the most significant things mentioned in the original Catholic Standard piece.

The pastor spoke about some of the major points he felt should be recognized. 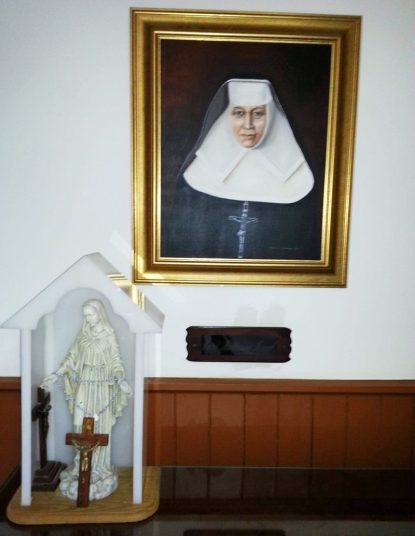 A painting of St. Katharine Drexel — along with a statue of the Blessed Virgin Mary — greets visitors upon entering the Maternity B.V.M. Old Church in the Pennypack Woods in Bustleton, Northeast Philadelphia. The saint attended Mass there every week in the 1800s.

“There has always been an indomitable spirit and resiliency with our parishioners,” Father Quinter said during his engaging homily. “We don’t like to give up, and we are always there to pitch in and pick each other up when adversity strikes. It’s been a cornerstone quality of our people, as evident as that cornerstone that was laid that first day.”

On that first day as the ceremony was going on, scaffolding that was in place fell to the ground, injuring several people, none seriously. Undaunted, the folks continued with the ceremony until it concluded.

In 1914, a devastating fire almost destroyed the Old Church. The parish community pitched in, and three months later the church reopened.

Just as recently as two years ago, the Old Church was forced to close due to structural damage to the roof. A full-court press was applied to get the landmark building repaired in time for the start of the 150th anniversary. And last fall, that was accomplished just in the nick of time, and to the delight of many.

Father Quinter also stressed several other things that were put in place that first day and are still foundational in the parish’s missionary quest today.

“When the cornerstone was laid that day, very simple items were placed into it,” he said. “The many celebrants who spoke that day went out of their way to say that the cornerstone was not in honor of the pastor, or bishop, or pope, but in the saving name of the Lord Jesus Christ.

The pastor also noted that the parcel of land for the church was donated by a non-Catholic man.

“So the bond, the connection between all faiths, was set in place 150 years ago. And it is still here today,” Father Quniter said. “Maternity B.V.M. is open and welcome to everyone. And it always will be.”

One of those it was open to was Katharine Drexel, whose wealthy family founded Drexel University. Katharine, whose mother died five months after she was born, left her life as an heiress behind when she became a nun.

She subsequently founded the order of the Sisters of the Blessed Sacrament and used her fortune to create new schools for Native Americans and African Americans across the United States. She had seen the plight and destitution of Native Americans when her family took a trip to the Western states in 1884 and wanted to do something specific to help.

St. Katharine Drexel’s work as a philanthropist, religious sister, educator, and foundress culminated in her being canonized a saint by Pope John Paul II on Oct 1, 2000.

She was the second American to be canonized a saint — St. John Neumann, another Philadelphian, was the first — and the first one born as a U.S. citizen. Her feast day is March 3.

Maternity B.V.M.’s Old Church and legacy of its very special visitor, St. Katharine Drexel, continues to shine upon its parishioners regularly in a vibrant way. The seed of faith that was planted 150 years has sprouted into a garden.

PREVIOUS: Another infernal betrayal in the church