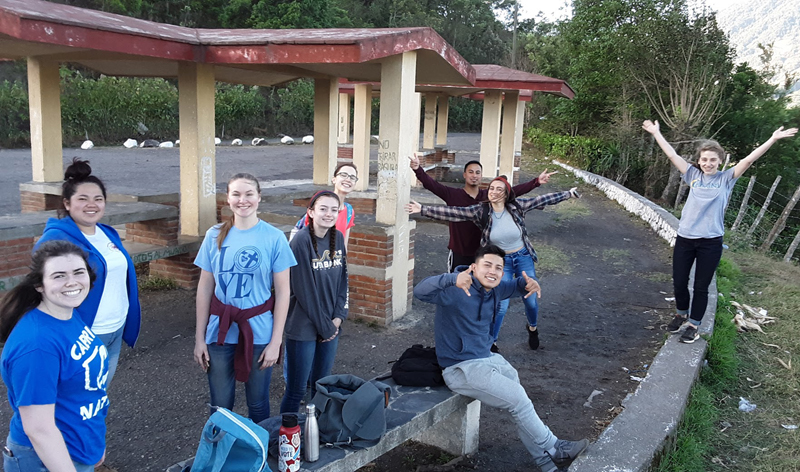 Some of the 14 Cabrini University students who worked for a week in the Mission in San Lucas Tolimán in Guatemala show they enjoyed their work aiding the Guatemalan people, and learning from them.

The students returned home this week with an enhanced world view and a dedication to continue their work for social justice and the common good when they travel next month to Washington, D.C.

The group is part of the “Working for Justice in Guatemala” course offered at Cabrini, where students spend several weeks studying Guatemalan history and Mayan culture in preparation for a one-week mission trip to San Lucas Tolimán during their spring break.

Since the course was first offered in 2009, more than 150 Cabrini students have visited the Mission in San Lucas Tolimán.

Cabrini junior Taylor LaPergola said her family didn’t understand at first why she was going to Guatemala. She explained to them about the country’s civil war between the Guatemalan government and its indigenous people, which lasted from 1960 to 1996. “It’s the 36-year war that nobody knows about,” she said.

From the time of the Spanish conquest and colonization of South America, fertile lands were taken away from the Mayan people and used for the production of valuable exports like sugar and coffee. But an insufficient amount of farmland remained for the subsistence farming needed by the Mayan people. Their lands were absorbed into the large agricultural business system, and there was no interest among business owners in land reform proposals for a more equitable distribution of land. 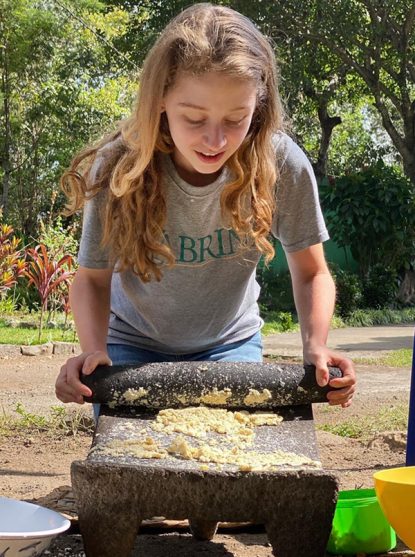 Cabrini junior Aislinn Walsh learned to make tortillas as Guatemalans do: by hand, grinding corn and rolling the dough. “I have a much greater appreciation for the work that goes into making tortillas,” she said. “It took a lot of time to grind up the corn and to get wood for the fire.”

In the midst of the civil war a young priest, Father Greg Schaffer, volunteered to leave his position teaching high school in Minnesota to help a small, struggling parish in rural Guatemala.  He arrived in San Lucas Tolimán on Palm Sunday 1964, and this became his new home until his death in 2012. Father Schaffer established the Mission at San Lucas Tolimán, and it has received 1,000 visitors from North America in the last 30 years.

At the end of February, Cabrini students experienced life in San Lucas Tolimán firsthand by helping to build houses and expanding an area used for drying coffee beans.

Students learned to make tortillas by hand, grinding corn and rolling the dough. “I have a much greater appreciation for the work that goes into making tortillas,” said Aislinn Walsh, a junior.  “It took a lot of time to grind up the corn and to get wood for the fire.”

Students also carried rainwater in vessels on their heads, and washed laundry by hand using washboards called pillas. Students said they now feel a greater appreciation for the modern conveniences they enjoy at home.

Perhaps the biggest impression on students and faculty was the Guatemalan people themselves.  “People constantly thank God,” said junior Gabe Cano. “They don’t take anything for granted.  It’s inspiring how thankful they are. They are happy with what they have, and they have so little.” Cano has a cousin who lives in Guatemala and he drove three hours to visit Cano during his time at San Lucas Tolimán.

LaPergola said she was impressed by the Guatemalan people because “they were so willing to give their time and attention (to us). I feel like I didn’t help them at all; they helped me.”

“They were so open,” said freshman Kate Spurlock of the Guatemalan people. “They were so willing to share what they had been through.”

Spurlock said she plans to take a semester off from Cabrini to return to Guatemala. She hopes one day to become a dentist and provide health care to the Guatemalan people, and to master the native language. “I want to be a dentist, and I don’t want a translator,” she said.

Students also gained a more inclusive and socially just worldview while living and working in Guatemala. About the issue of immigration, Spurlock said, “They don’t want to migrate. They were threatened or endangered (at home). People say immigrants should do it legally, and go through the process, but the way the system is set up, they can’t.”

Dr. Jerome Zurek, who teaches the “Working for Justice in Guatemala” course and has taught English and communications at Cabrini since 1971, said, “People don’t migrate for fun or convenience. They figure it’s better to die while migrating than stay home and be killed.”

He noted that targeted foreign aid that would systematically reduce problems such as unemployment, hunger and inadequate health care, which would dissuade people from seeking to migrate, has been cut by one-third by the Trump administration.

For that reason Cabrini students will travel to Washington on April 24 to meet with the foreign affairs representatives of the Pennsylvania and New Jersey delegations to the U.S. House of Representatives and Senate. Students will draw upon their personal experiences at San Lucas Tolimán when discussing migration, poverty, hunger and climate change.

Their experiences abroad seem to have inspired Cabrini students to turn toward advocacy. “I have this responsibility now,” said Mignon Toppino, a senior. “I don’t think people understand the purpose (of the mission trip), and how it transforms us,” she said.

Cano said he took the course to learn about new cultures. “I didn’t expect to get close to anyone,” he said, but added, “we left as individuals, and we became family.”

Students said they didn’t often miss the conveniences of home, except for wi-fi connectivity.  They each said they want to start living more simply in their daily lives now that they’re back at home, and looking for ways to be happy with less.

The students’ next challenge, Zurek said, is to transform their experiences into “something more than a memory” as they look ahead to lobbying their representatives in Washington. “We’ll keep thinking about Guatemala,” he said. 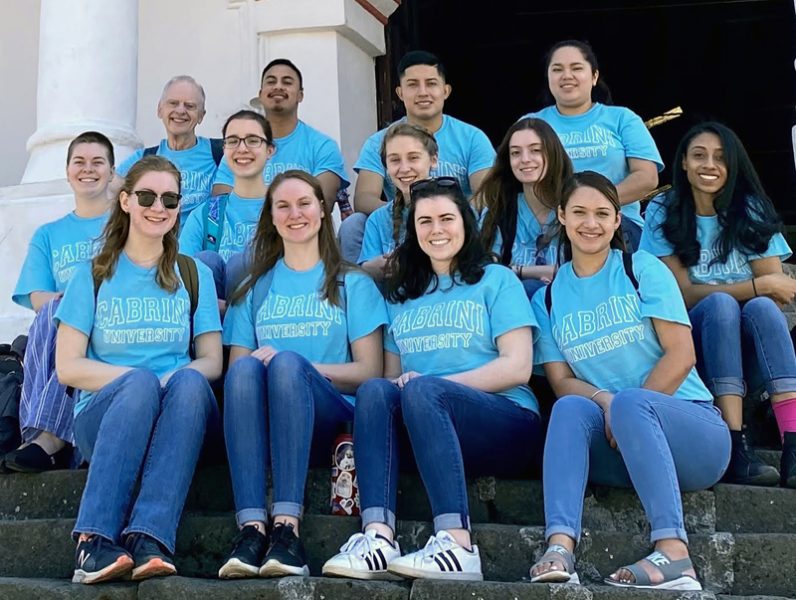 The Cabrini University group pauses for a group photo at the end of their trip to Mission at San Lucas Tolimán, Guatemala. Faculty member Dr. Jerome Zurek, who led the trip and taught the preparatory course, is shown at back left.