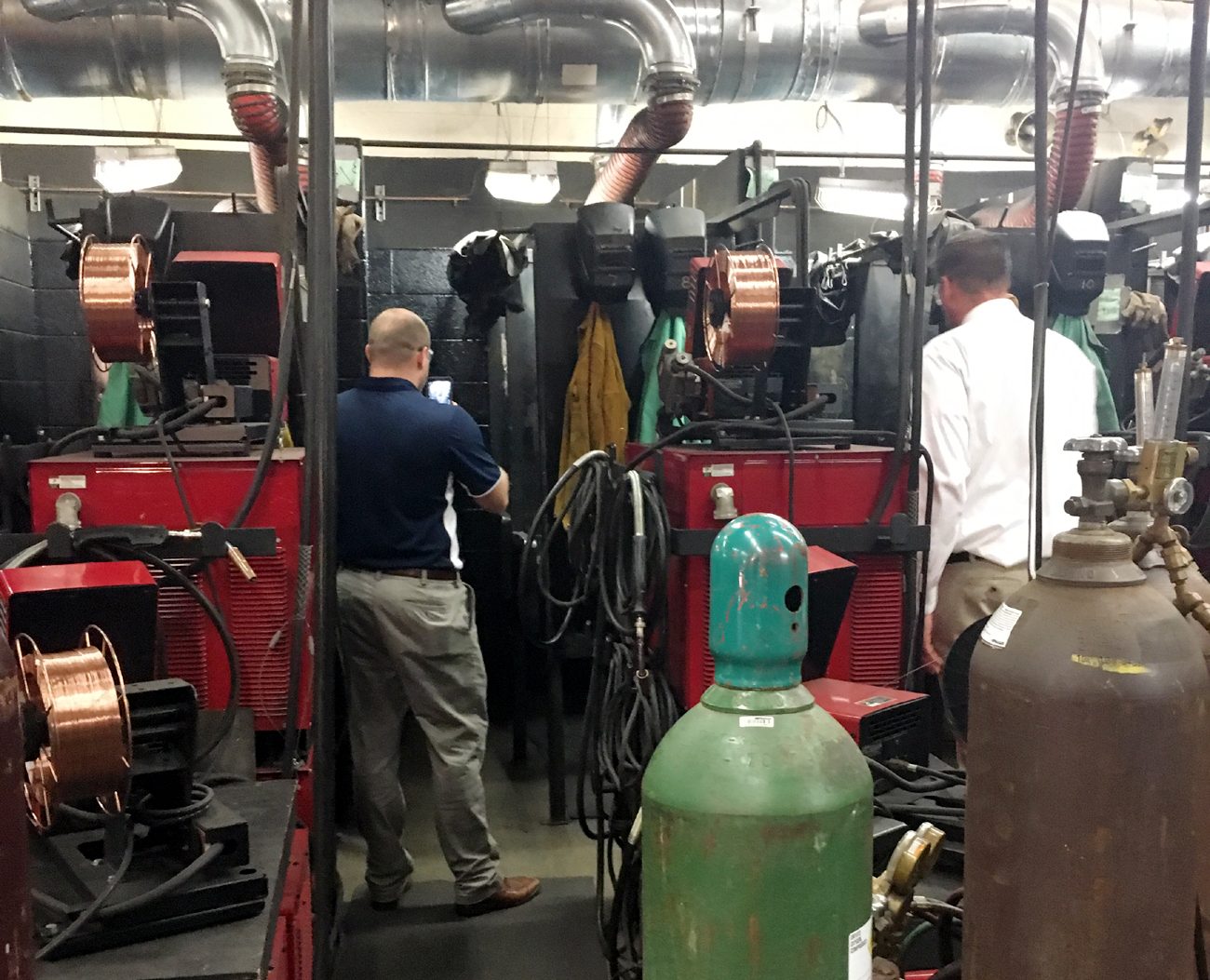 Father Judge High School staff check over welding equipment as part of the school's welding program beginning with the 2019-2020 academic year, thanks to a grant from the Archdiocesan Education Fund. (Photo by Sarah Webb)

Thanks to a $1.5 million Pennsylvania State Redevelopment Assistance Capital Program (RACP) grant to the Friends of Father Judge High School late last year, the school is well along the way to funding the expansion of the Father Brisson Academic Excellence Center and its Welding Lab, the first of several planned career-oriented programs.

It was one of 211 grants made statewide under the RACP, which is administered by the state Office for the Budget. The Friends of Father Judge High School is a non-profit founded in 2002 specifically to fund-raise for Father Judge, a Northeast Philadelphia archdiocesan high school for boys founded in 1954, originally with a priest faculty of Oblates of St. Francis de Sales and now with a mostly lay faculty.

To date the Friends of Father Judge have raised approximately $13 million to assist various programs at the school.

“I am extremely grateful and quite pleased that the Commonwealth of Pennsylvania understands our school’s vision to educate our children in numerous areas where they will excel in a special career,” said Friends of Father Judge chairman William St. Clair IV. “Our strategic plan invigorates learning, whether our students’ path is college bound or a master tradesman/technician.

“We maintain an Academic Excellence Center to ensure that our students are successful graduates — well educated, disciplined and men of character. Our board’s goal is to have Father Judge as a destination school for parents of children who want to be well educated and strive for a successful career,” St. Clair said.

While obtaining the grant was the collective effort of many in state government, especially involved and present for a recent check award ceremony were state Sen. Christine Tartaglione in whose district Father Judge lies; and from a neighboring district, state Sen. John Sabatina, a 1988 graduate of Father Judge.

“I was honored to advocate for this funding on behalf of Father Judge because of the high-quality education that the school offers to residents of the 2nd Senate District and the entire Philadelphia region,” Sen. Tartaglione said. “The welding program and the academic excellence center are perfect examples of the school’s innovative approach to preparing students for academic success and for prosperous careers.”

“It’s an honor to be able to assist Father Judge high School as it continues to expand its educational opportunities to students from our community,” Sen. Sabatina said. “As a graduate of Father Judge I take great pleasure in seeing the school grow into one of the premier high schools in Philadelphia.”

An example of the academic excellence of Father Judge is the school’s president, Brian Patrick King, class of 1997. “As an alum and as the president of this fine institution I am deeply and equally grateful to Governor Wolf for selecting our RACP application as well as the galvanized cohort of local senators.”

While the RACP grant is the largest donation to date, the welding program had already been kick-started through grants totaling $350,000 from the Connelly Foundation and the Archdiocesan Educational Fund. At his time 46 sophomores have begun the welding program.

Now up and running, the program is a three-year, double-period course starting in the sophomore year and ending with certification as a welder, fully trained to begin work.

The Father Brisson Center for Academic excellence — named for Blessed Louis Brisson, founder of the Oblates of St. Francis de Sales — assists students with vital reading and math skills and to prepare them for state and national performance series testing.

NEXT: Cabrini students learn of social justice from Guatemalan people