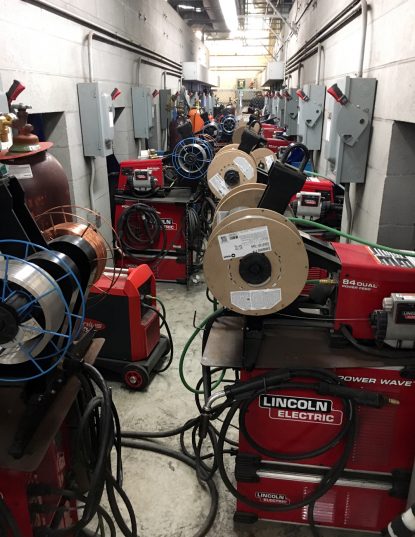 The welding equipment delivered last year to Father Judge High School is fully in use as students learn the trade and earn certification for a post-high school career in welding. (Sarah Webb)

There is no question, the new Welding Lab at the Academic Excellence Center of Father Judge High School, which is taught by welding specialist Joe Williams, fills a niche.

Of course it isn’t for everyone and that’s fine because there is no need for everyone to learn welding. But for the 46 young sophomores who are enrolled in the three-year program because they want to be in it, it may lead to a future career with good pay.

Think back to high school and college and the courses one had to take — like them or not, they were completed because they were on the prescribed curriculum. One might even have gotten high grades, but after the final exam, how many of these were relegated to an unvisited storage bin in a far corner of the mind, never to be retrieved?

The point is, these 46 young men are in welding classes by their own choice. Maybe some will decide it is not for them and not persevere for the entire three years. But this program is their choice, and their parents agree.

“Before I was in welding at Judge, I was not that involved in too many activities,” sophomore Jabriel Lopez said. “I heard about the welding program and decided to do some research on it. I found it fell into my area of interest which was kind of cool because no one in my family is in the trades. In fact my mom is a psychologist.

“As I learned more about it, I realized being in welding had helped me formulate a plan that was more hands on, and I really like it.”

Jalen Robinson-Green really goes the distance for Father Judge. Every day the Delaware County resident takes a bus from Clifton Heights to Upper Darby, then the Market-Frankford El its entire length to Frankford, then another bus to Father Judge.

“Welding has really given me something for the future,” Jalen said. “It is really challenging. It gives me great skills which will lead to a good paying job in the welding industry, and it just enhances a lot of my skills. I like working in the lab with my classmates and Mr. Williams, our teacher.”

Terrell Robinson, Jalen’s dad, said, “I really like what they are doing there. When he gets out of school, he will have certification, and get a real job and be able to provide for himself. Also, he enjoys it a lot.”

“Welding has brought something new into my life which has helped me focus,” said Landon Culver. “It will give me a great career path no matter which direction I go. I like the extra path that it offers beyond going to college. It is like a guarantee of a successful life in the working world when I complete the program and it just gives me a lot of options.

Julie Culver, Landon’s mother, agrees. “I think it is a really good program. At first, he didn’t know what to make of it but now he is really into it. Now all he talks about is welding; before he wanted to go into sports medicine.

“He has a lot of friends and he has a full scholarship to the school. I’m really so impressed with what he is doing.”

PREVIOUS: Students show they know their faith at religion bee