Vancouver-based Insite is the model for Philadelphia's plans to open a supervised drug consumption facility. Based on its self-reported statistics, Insite has provided "clinical treatment visits" (not necessarily related to addiction recovery counseling) for just over 1% of the 3.6 million visits it has received since 2003. (Insite/Facebook)

Plans to open a Philadelphia site for the supervised injection of illegal drugs have stirred community opposition in the city, first in Kensington and now in South Philadelphia.

The nonprofit Safehouse and the office of Mayor Jim Kenney are aiming to open at least one such unit in the city, modeled after Insite in Vancouver, Canada, the first supervised drug consumption facility in North America and now one of some 25 in Canada.

Yet based on its own statistics, Insite has provided “clinical treatment visits” in just over 1% of the 3.6 million visits it has seen since 2003.

Such visits do not necessarily include addiction recovery counseling, said Elizabeth Holliday of Vancouver Coastal Health (VCH), which according to Insite’s website “operates and provides all the funding, senior administrative and health workers at Insite.”

“It varies,” said Holliday, VCH’s manager for HIV prevention, harm reduction and aboriginal partnerships, who spoke with CatholicPhilly.com by telephone March 2. “It could be for reasons other than addiction, such as wound care, some other health issue or to speak with the nurses. We don’t track the statistics that specifically, because of the complexity of that and because of the limitations of our database.” 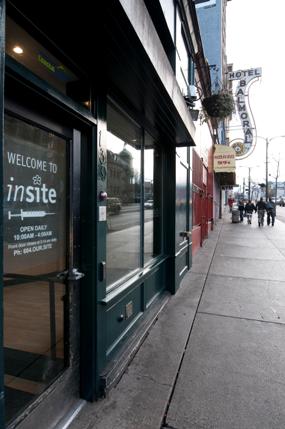 VCH provides two registered nurses for Insite, but only one licensed practical nurse for one of its eight additional sites, said Holliday. Peer counselors and mental health workers are provided by the nonprofit Portland Hotel Society (PHS Community Services Society) to staff and operate Insite and its mobile injection van.

Holliday said the mental health workers were “not required to have a professional designation,” and “could be someone with a two-year diploma” as well as “community and life experience.” However, she stressed that PHS directly oversees the hiring and administration of such workers.

Insite states on its website that none of its 6,440 staff interventions for drug overdoses has resulted in death.

Yet even the prevention of those potential deaths is insufficient to justify Insite, said Msgr. Bernard Rossi, episcopal vicar for health care of the Archdiocese of Vancouver.

“My position was and remains that the end does not justify the means, and that’s the bottom line,” said Msgr. Rossi, who was not the archdiocesan vicar for health care at the time of Insite’s creation.

“While there is some harm reduction in terms of infection and wound care,” the priest said, Insite and similar facilities aren’t the most effective response to addiction.

“We need to treat the addiction, not lie down and accept it,” Msgr. Rossi said.

He stressed the need to “make a greater effort” in researching addiction and developing more robust treatments that produce long-term sobriety.

Other addictions also require much-needed attention, he said, citing pornography as one example.

Regardless of the addiction, “we’re still dealing with a person who is created in the image and likeness of God,” said Msgr. Rossi.

For that reason, “we can’t rob them of the ability to make a choice or decision” to put down the needle altogether, he said.

“They’ll say that Insite is very successful at saving lives,” said Msgr. Rossi. “But it hasn’t saved people from addiction.”

Based Insite’s self-reported statistics, the average client visits the facility approximately 34 times per year, although Holliday said that such numbers can vary.

“What we see are sometimes clients who visit very regularly, sometimes once a day and some once in a while,” said Holliday. “We avoid giving a daily average because it’s confusing to people.”

By its own admission, Insite has experienced difficulty in gathering statistics on its performance. Its website notes “several discrepancies were found” during its July 2019 update of its client and service numbers.

Figures are only listed for calendar years 2018 and 2017, with a single statistic for fiscal year 2017-2018 on the 443 clients who accessed Onsite, the center’s adjoining detox treatment facility.

The page notes that “clients may have been referred to other detox or treatment services elsewhere,” but provides no further details, and no specific data for the years 2003 to 2016.

Among the expenditures highlighted in the audit were more than $8,600 in limousine fees during fiscal year 2013, upwards of $13,000 to a firm in which a PHS manager was a shareholder, just over $5,800 for a Danube River cruise and more than $2,600 for a trip to Disneyland in Anaheim, California.

PHS senior managers resigned after the audit’s release, but the nonprofit continues to grapple with its financial management. According to its 2019 annual report, a new computer system created “innumerable glitches” that resulted in “inaccurate” budget material and “incorrect” staff paychecks.

NEXT: Here’s how to share food with the hungry during Lent