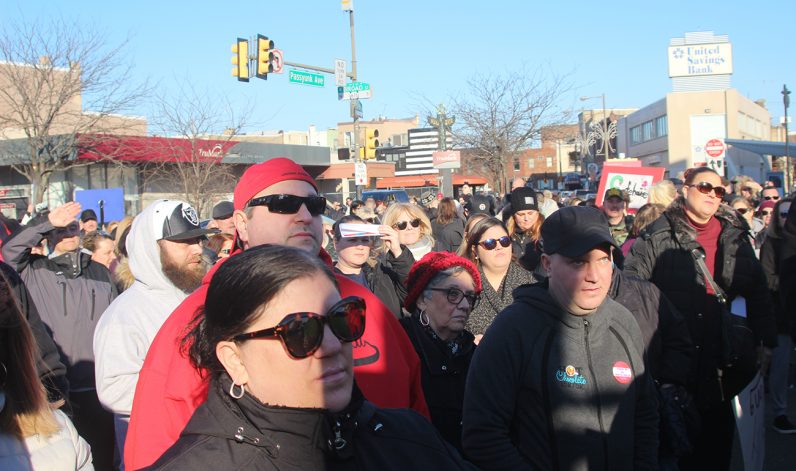 Attendees listen to speakers during a March 1 rally at Broad and McKean Streets in Philadelphia to protest the city’s plans for a safe injection site. Anthony Giordano, a parishioner of St. Monica in South Philadelphia, organized the rally (which drew participants from a number of South Philadelphia parishes) as part of a grassroots campaign to counter violence and improve the neighborhood’s quality of life. (Photo by Gina Christian)

Some 2,000 people turned out for a rally Sunday, March 1 organized by a St. Monica parishioner to oppose plans for a safe injection site in South Philadelphia.

“Our voices are the voices that will be heard,” said Anthony Giordano, addressing a crowd of all ages gathered before the Constitution Health Plaza.

The complex, located at Broad and McKean Streets, was due to lease space to the nonprofit Safehouse, which plans to open at least one facility where intravenous users of illegal drugs can self-inject under supervision.

On Feb. 25, a federal judge greenlighted the site, which is endorsed by Philadelphia Mayor Jim Kenney’s office.

After public outcry from numerous residents, who said Safehouse had not consulted the community about the project, Constitution Health Plaza officials announced on the evening of Feb. 27 that they had cancelled Safehouse’s lease.

Earlier that day, U.S. Attorney William McSwain asked a federal judge to postpone the South Philadelphia opening until an appeal of the Feb. 25 ruling can be heard.

In the meantime, Giordano and his supporters are proceeding with a grassroots campaign to prevent the opening of a safe injection site anywhere in Philadelphia. Now counting almost 8,000 members, their organization “Stand Up South Philly and Take Our Streets Back” is committed to battling violence and other threats to quality of life with peaceful activism. 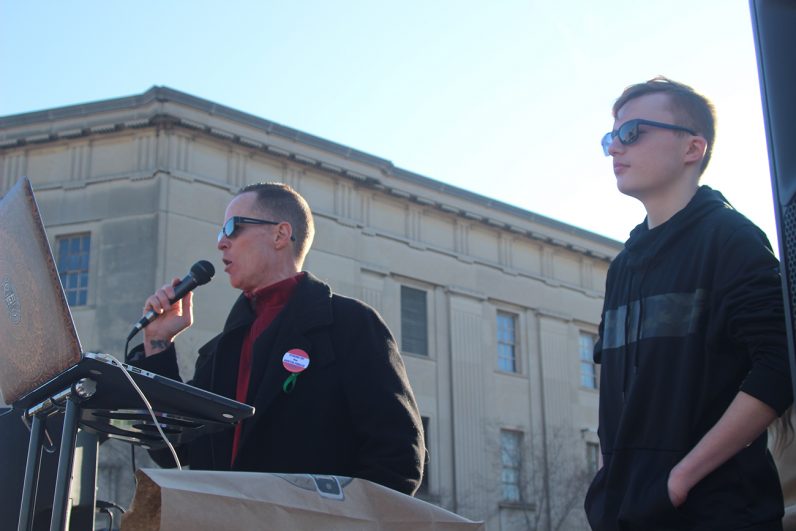 Anthony Giordano, founder of a grassroots campaign to improve South Philadelphia, addresses some 2,000 attendees at a March 1 rally he organized to protest the city’s plans for a safe injection site. His son Carmen Giordano (right), an eighth-grade student at St. Monica Parish School, also spoke at the event. (Gina Christian)

That strategy was evident during Sunday’s two-hour rally, which concluded with a walk down Broad Street to Marconi Plaza. But Giordano said after taking the stage he had been spat upon by one of the few counter-protesters in attendance.

The “Stand Up” group, which Giordano and his wife Lisa organized in just 28 days, has also gotten the attention of elected officials including City Councilmembers Kenyatta Johnson and David Oh, and State Rep. Martina White, who each spoke briefly at the rally.

Johnson, a South Philadelphia native, told rally attendees that “if any decisions are going to get made regarding our neighborhood, we must have a seat at the table.”

Philadelphia “has committed more than $36 million to help people who are addressing the issue of the opioid crisis,” Johnson said, adding, “don’t let people try to tell you that if you don’t support the safe injection site, you don’t support people in recovery.”

The message resonated with a number of those in the crowd, including Diane Daly of St. Richard of Chichester Parish in Philadelphia.

Daly said she is raising her 8-year-old grandson since her adult daughter is actively struggling with addiction. Her exact whereabouts are unknown, but Daly – who last heard from her daughter at Christmas – believes she is somewhere in Philadelphia’s Kensington section, the epicenter of the local opioid crisis.

Asked if she believed a safe injection site would help her daughter, Daly replied, “No, not at all,” citing improved medical insurance, inpatient treatment and extensive mental health counseling as more viable options for recovery.

Kathy Diering, a parishioner of St. Gabriel in Philadelphia, described the planned safe injection site as “a slow suicide” and “a subtle way of destroying life.”

“It’s poisoning them,” said Diering, who herself successfully overcame substance abuse and now works at Our House Ministries, a Grays Ferry-based outreach that provides recovery homes and faith-based sobriety programs. 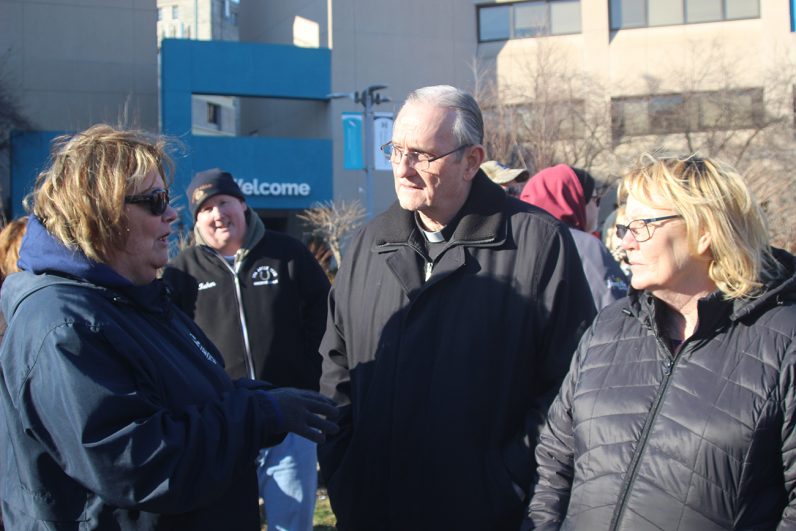 (Left to right) Diane Daly of St. Richard of Chicester Parish speaks with Father Douglas McKay and Kathy Diering of Our House Ministries in Philadelphia’s Grays Ferry section during a March 1 rally in South Philadelphia to protest city plans for a safe injection site. All three oppose the sites in favor of treatment, rehabilitation and spiritually-based support groups. (Gina Christian)

“They wouldn’t be clear-minded or able to understand any of the recovery concepts, because they’re not their true selves,” she said.

Father Douglas McKay, founder and chaplain of Our House Ministries, advised the crowd that “you don’t cure psychotropic drugs with more psychotropic drugs,” and stressed that a fuller understanding of addiction as both a physical and spiritual disease was necessary.

Speaking prior to the rally, Father McKay — who himself lost a brother to an overdose — said that after 40 years of addiction ministry, he has seen individuals attain lasting sobriety through treatment programs, 12-step groups and spiritual support groups such as the Calix Society.

Many at the rally said that the safe injection site proposal simply wasn’t practical.

“I think there’s a good intention behind it, but it hasn’t really been thought out,” said Danny Tartaglini of St. Monica Parish, who attended the rally with his wife Stephanie and their young children Valentina and Luciano. “You can’t watch people administer their drugs, and then escort them out and pretend it’s not going to affect public safety.”

Stephanie Tartaglini agreed, and said that “rehabilitation centers and counseling” were needed instead.

“It puts not only the adults and the people (nearby) in danger, it puts us kids and vulnerable people at risk too,” said Carmen, addressing the crowd. “Fund rehabs and hospitals to take care of these people, so they can thrive and help our society instead of spreading drugs everywhere.”

The young man, who was followed on stage by his younger sister Vienna, also questioned what he saw as an inconsistency in the application of the law regarding the sites.

Anthony Giordano made a similar comparison with Philadelphia’s beverage tax, which is assessed against sweetened beverages sold within the city limits.

“They want a safe injection site, but they want to tax our soda and tell us, ‘Soda? No good for you,’” said Giordano. “Soda is no good for you, but illegal heroin, that is the answer?”

Rich Cedrone, who worships at both Epiphany of Our Lord and Stella Maris parishes in Philadelphia, said that the addiction crisis was a “drug virus” that needed immediate attention — but not safe injection sites.

“I’ve known a lot of people who went to seek help and there’s not enough beds, not enough counselors, or something’s wrong with their insurance,” said Cedrone, who serves as president of the South Philadelphia Community Civic Association and the Friends of Marconi Plaza.

Above all, said Cedrone, “we want hope for people. They don’t have hope, and they need that hope again.”