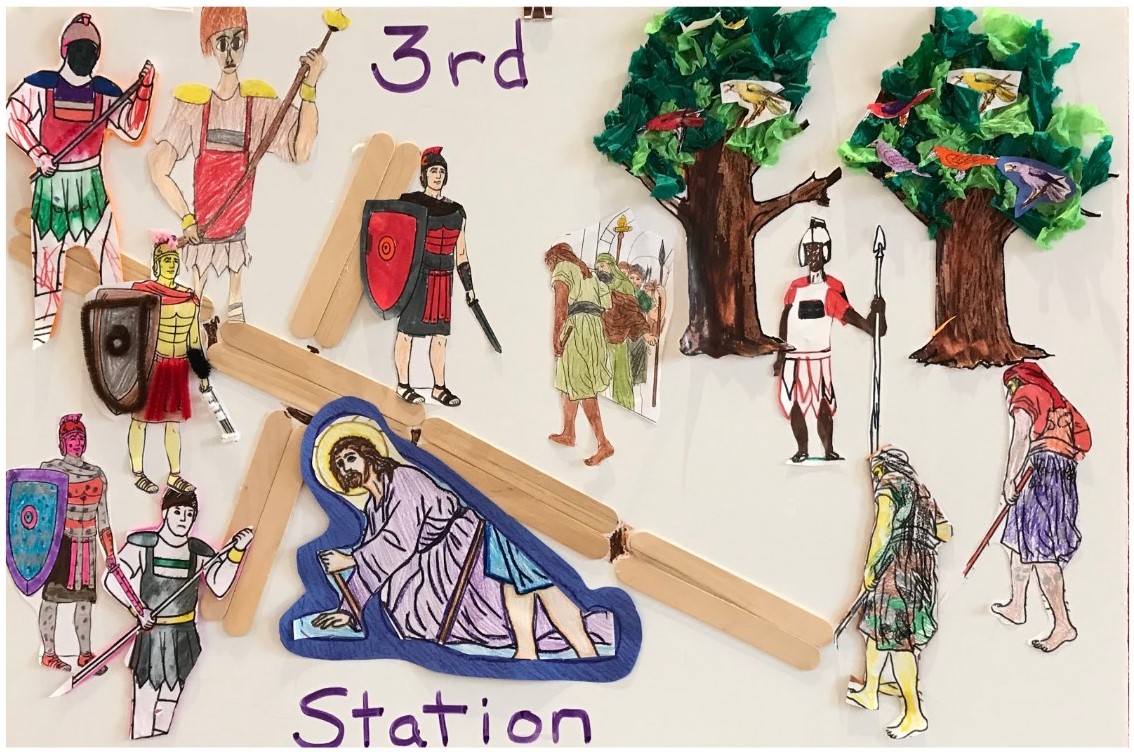 The third station of the cross, created by a St. Thomas of Villanova Parish PREP student, used at the parish's "Stations of the Cross in Solidarity with Survivors of Sexual Violence and Abuse" on March 4.

The faithful gathered on March 4 to pray the “Stations of the Cross in Solidarity with Survivors of Sexual Violence and Abuse,” in the parish’s Rosemont Chapel.

This special variation on the traditional Lenten devotion was created by Augustinian Father James Paradis and originally used at the National Shrine of St. Rita of Cascia in South Philadelphia.

The first station’s reflection begins, “We stand, by our baptism, as brothers and sisters of all those who have been handed over to suffering, in particular, those harmed by sexual abuse… .”

We Are The Church (WATCH), a parish ministry of St. Thomas of Villanova, brought the stations to the parish. The ministry consists of lay people and clergy and is dedicated to addressing issues surrounding the sexual abuse crisis and abuse of power within the Catholic Church.

Anne Minicozzi and Carol Abele, co-chairs of WATCH’s prayer and healing task force, wanted to do something special for Lent. Augustinian Father Joseph Genito, the parish pastor, brought up the stations program created by his fellow Augustinian, and the event flowed from there. 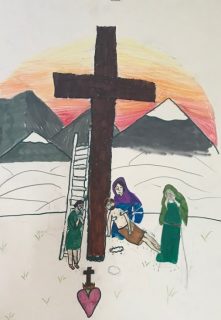 The 13th station of the cross, created by a St. Thomas of Villanova Parish PREP student, used at the parish’s “Stations of the Cross in Solidarity with Survivors of Sexual Violence and Abuse” on March 4.

Participants were actively involved in the program utilizing music, Scripture and prayerful reflection. Before the service began, each person was invited to take a piece of incense as an offering and place it in the brazier by the altar.

In front of the altar was a single easel that held a handmade image of the first station of the cross. As the stations continued, PREP student volunteers respectfully took the station off the easel and replaced it with the next station.

Sixth grade PREP students of the parish employed a variety of artistic media and imagination in creating the images. The students’ stations of the cross are posted to the parish website for personal prayer and can be viewed here.

Minicozzi said she found the intergenerational aspect of the event meaningful, as seniors, middle-aged and young adults participated alongside student volunteers and artists.

The program was fairly simple to organize, according to Minicozzi, and she hopes other parishes will use it in the future.

Praying for survivors of abuse can be painful, Minicozzi said, so combining it with the familiarity of the stations of the cross is effective.

By participating in the stations, Minicozzi said she can “take ownership and action” in a tragedy that often causes paralysis.