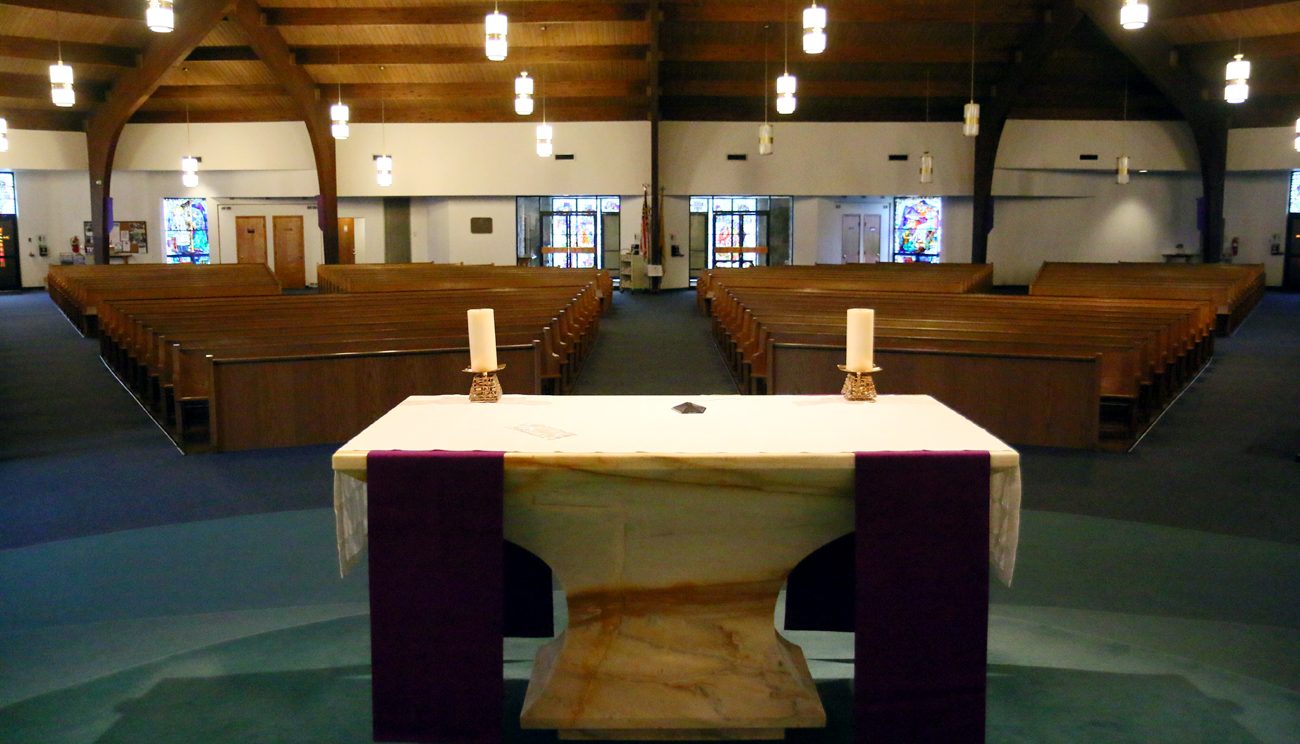 At normally bustling St. Christopher Church in Northeast Philadelphia, a priest's view from behind the altar was starkly absent of faithful parishioners this week. Beginning March 18, all weekday and Sunday public Masses have been suspended in the Archdiocese of Philadelphia until further notice. But several resources are allowing thousands of faithful to remain united in faith during the coronavirus pandemic. (Photo by Sarah Webb)

With all public Masses suspended in parishes due to the coronavirus, Catholics throughout the Archdiocese of Philadelphia are using digital tools to sustain their faith.

Masses, rosaries, holy hours and prayer groups have emerged rapidly online through livestreamed video since a March 17 announcement by Archbishop Nelson Perez that Sunday and weekday Masses would only be celebrated privately by priests.

The measure was undertaken as part of health officials’ efforts to contain the coronavirus (COVID-19) pandemic. The highly contagious virus, believed to spread rapidly through interpersonal contact, has so far infected some 244,500 people worldwide and killed more than 10,000.

Even before the suspension of public liturgies, at least 44,000 area faithful opted to participate in a livestreamed Mass March 15 on the Third Sunday of Lent celebrated by Archbishop Perez at the Cathedral Basilica of SS. Peter and Paul.

“The Mass is really the work of Jesus Christ, and we get to participate in it,” said Father Dailey, who teaches homiletics and social communications at St. Charles Borromeo Seminary in Wynnewood. “And whether it’s something we’re seeing and watching on a screen, or something we’re seeing and watching and sensing in a church, it’s still the work of Jesus Christ.”

(Learn how you can begin each day united in prayer with others through daily Morning Prayer streamed live online from St. Francis de Sales Parish, Philadelphia.)

The Archdiocese of Philadelphia has long been equipped to present the liturgy through television and the internet, said multimedia producer Daniel Kearns, who has broadcast the cathedral’s Masses since 1993.

Initially, Kearns provided closed-circuit coverage to accommodate portions of the cathedral with obstructed views of the sanctuary. By 1999, he had designed and installed a system of four robotic cameras that also provided a broadcast feed for local television stations.

“The single feed goes to the media trucks outside, so they don’t need to bring their cameras inside,” said Kearns. “That preserves the sacredness of the space and the beauty of the celebration.”

For the past 11 years, Kearns has prerecorded weekly Masses in Spanish at the cathedral for regular broadcast on local Telemundo and Univision television stations.

(Learn how a recent proposed fee increase was dropped, allowing the Mass to remain televised.) 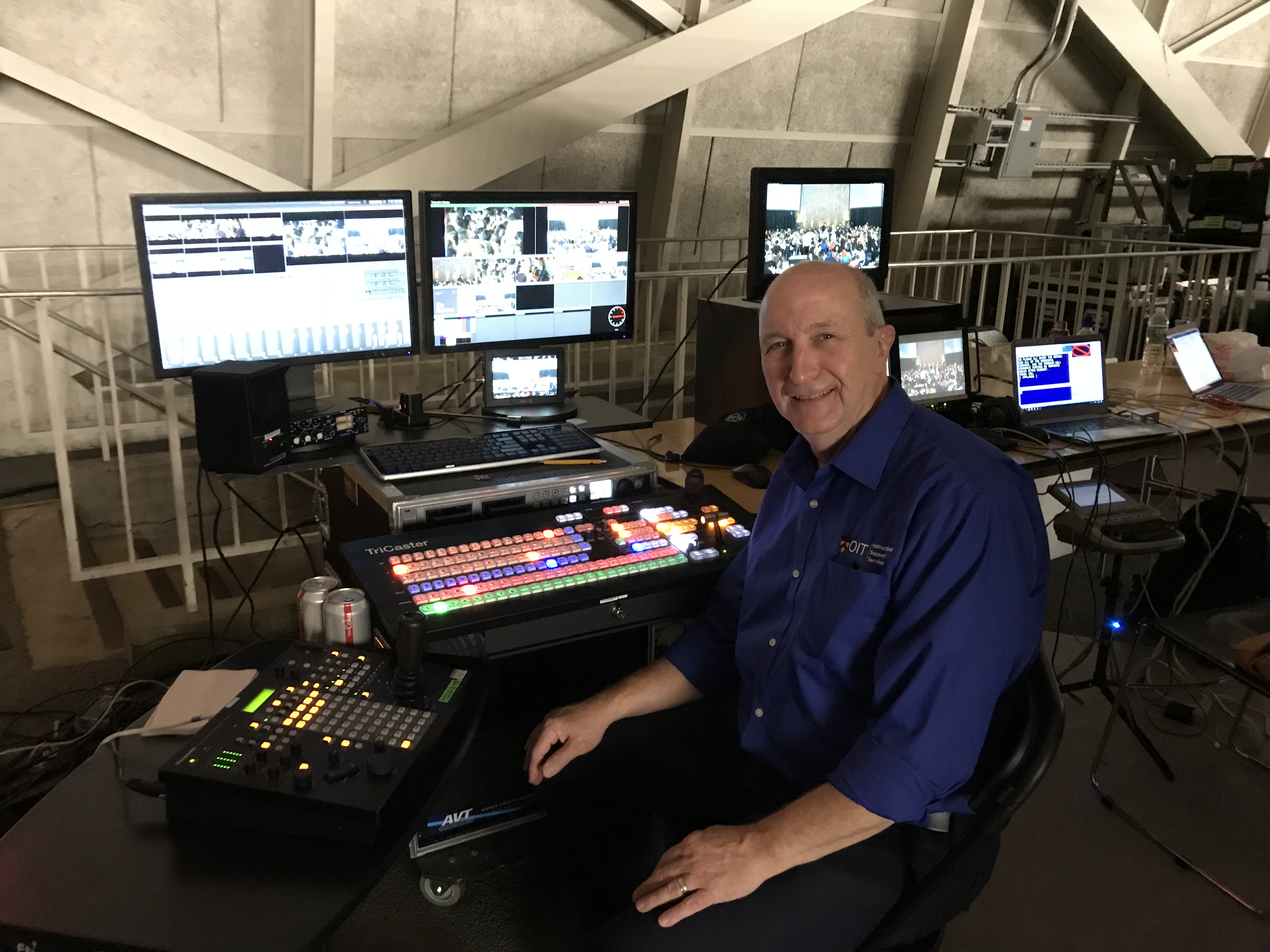 Multimedia producer Daniel Kearns, seen here at one of his studio control rooms, began developing broadcast capabilities for the Cathedral Basilica of SS. Peter and Paul in 1993, and has produced hundreds of televised and livestreamed liturgies since. Kearns stresses the need for high-quality, unobtrusive audiovisual equipment that preserves “the beauty of the liturgy.” (Photo courtesy of Daniel Kearns)

Ahead of Pope Francis’ visit during the 2015 World Meeting of Families, the cathedral’s audiovisual system was upgraded, and now features eight high-definition robotic cameras, 32 audio sources and a new control room in the upper sacristy.

Because the cameras are small and discreetly mounted, “if you’re praying in the cathedral, you shouldn’t notice it’s being televised,” said Kearns. “We don’t want anything distracting from the liturgy.”

Several other area parishes also have substantial experience in livestreaming their Sunday Masses, including St. Raymond of Penafort in Philadelphia, which adopted the technology a decade ago.

St. Raymond’s pastor Father Christopher Walsh said livestreaming brings the liturgy to the homebound, parishioners who live at a distance and young adults who want to “check out the church” before attending in person.

The key to livestreaming Mass is to “do it as well as possible,” he said.

Quality cameras, clear audio and a dedicated, high-speed internet connection in the sanctuary are essential, as is a team approach, said Father Walsh.

Kearns agreed, adding that the digital transmissions of the Mass ideally include “multiple images that change on a regular basis” to keep viewers engaged.

“When you’re sitting in the pew, you’re looking at the celebrant, the people around you, the stained glass windows,” he said. “If you just have one camera on the sanctuary, it doesn’t hold the interest of somebody watching through their device.”

Remote participants should “ask the Lord to help them celebrate the Mass with reverence, attention and love,” said Father Dailey.

Eliminating distractions, lighting candles and following the gestures of Mass (such as standing or kneeling when appropriate) can focus livestream attendees more deeply on the liturgy, he said.

At the same time, the inability to physically receive holy Communion is “clearly the gravest deficit to the online celebration of the Mass,” said Father Dailey.

In such cases, he said, the practice of spiritual communion — defined by St. Thomas Aquinas as “an ardent desire to receive Jesus in the most holy sacrament and lovingly embrace him” — becomes essential.

‘A thousand of my closest friends’

Other forms of devotion — such as the rosary, the liturgy of the hours and eucharistic adoration — have also moved online with increasing frequency in the past few weeks. 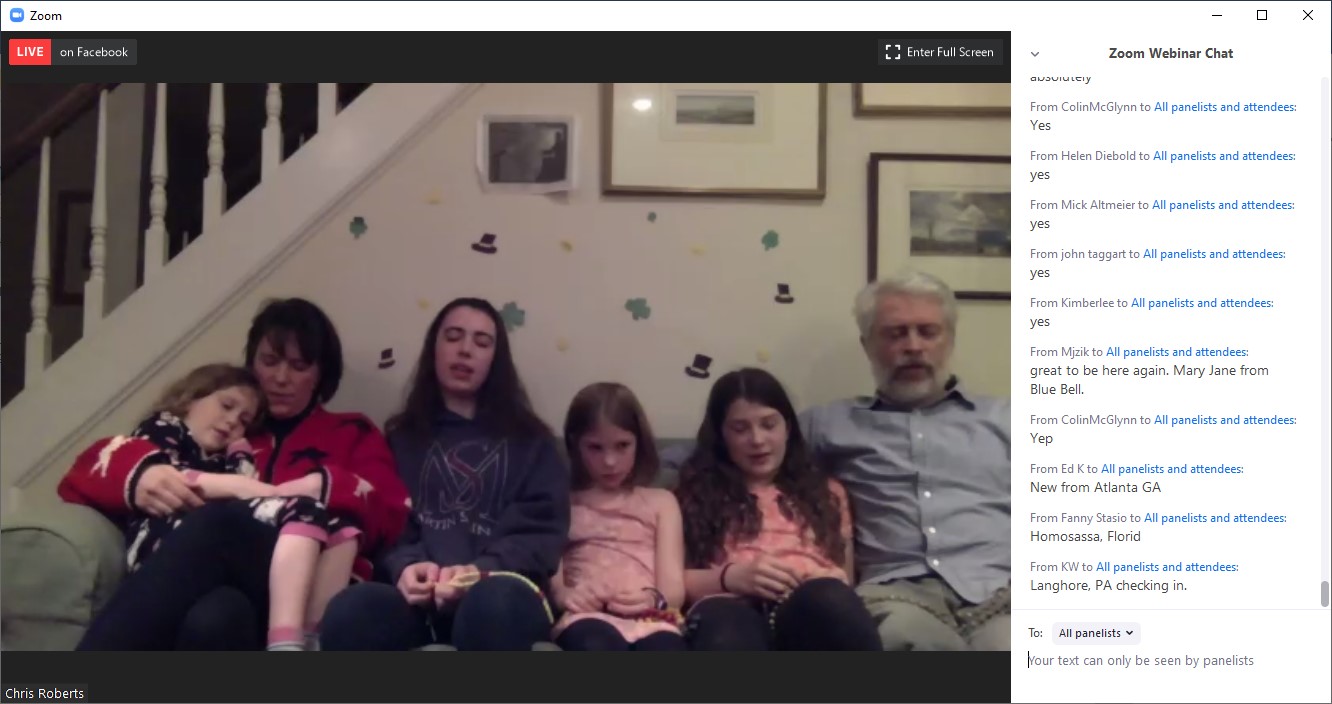 Deacon Christopher Roberts and his family, members of Holy Martyrs Parish in Oreland, led a March 18 session of a nightly online rosary organized by Meghan Cokeley of the Office for the New Evangelization. (Photo courtesy of Meghan Cokeley / Gina Christian)

As the coronavirus pandemic intensified, Meghan Cokeley, director of the archdiocesan Office for the New Evangelization, organized a nightly rosary using the online meeting platform Zoom, which allows participants to join in using their computer, mobile device or telephone.

The prayer group quickly attracted almost 500 households in its initial session March 13. A few nights later, that number quickly exceeded 2,100 logins on Zoom, with participants chiming in from throughout the archdiocese and the nation, as well as Canada, Ireland, Trinidad and Colombia.

Although only she and her guests who lead the rosary can be seen and heard during the recitation, “there is a beautiful sense of family among us,” said Cokeley.

The video platform includes a chat window through which “people sign on with messages of great joy, just happy to be praying with each other,” she said. “As one woman from California emailed me, ‘I’ll see you tonight along with a thousand of my best friends!’”

The technology has also afforded a glimpse into the lives of Cokeley’s guests, which have included a number of priests, women religious and local families logging in from their homes. Younger guests have even provided a few humorous moments: one boy, dressed in pajamas, fled from the screen in the middle of a “Hail Mary.”

Father Christopher Moriconi, who joined Cokeley in leading the March 17 recitation, provided views of the tabernacle in the Blessed Sacrament Chapel at St. Charles Borromeo Seminary in Wynnewood.

Like fellow priestly guests, he blessed participants at the conclusion of the rosary, prompting a number of “thank you” messages in the chat window.

Online video conferencing will enable a Rosary Rally for Vocations, initially set to be held at seven locations, to proceed as scheduled on March 25 at 7 p.m.

Sponsored by the archdiocesan Office for Vocations to the Diocesan Priesthood, the rosary will be led online by Archbishop Perez, office director Father Stephen DeLacy and seminarians from St. Charles Borromeo Seminary.

Participants can join the rally through the website of the archdiocesan Office for Vocations to the Diocesan Priesthood at HeedTheCall.org or on the office’s Facebook page.

NEXT: Devotion in Rosemont chapel brings art, prayer to tragedy of sex abuse