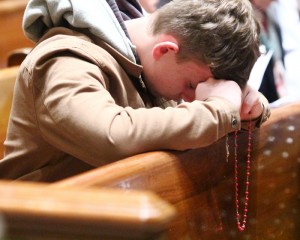 Collin O’Neill of St. Andrew Parish in Newtown prays the rosary in this 2016 file photo. (Photo by Sarah Webb)

A major push to promote vocations to the priesthood in the Archdiocese of Philadelphia next week is moving forward, even amidst the unexpected disruptions caused by the coronavirus pandemic.

A community-wide Rosary Rally was originally planned to invite about 3,000 Catholics across the region to gather in seven locations to pray the rosary with Archbishop Nelson Perez and seminarians via the internet.

While the event is still scheduled for Wednesday, March 25, the public portion will not occur in keeping with government-mandated guidelines discouraging large or small gatherings of people in public.

Instead, at 7 p.m. next Wednesday, all Catholics are invited to pray the rosary from home with Archbishop Perez via streaming video in the inaugural event titled, “Celebrating Mary’s Yes.”

The virtual Rosary Rally can be joined through the website of the archdiocesan Office for Vocations to the Diocesan Priesthood at HeedTheCall.org or on the office’s Facebook page.

The choice of March 25, the Solemnity of the Annunciation of the Lord, is not an accident. This feast celebrates the “yes” of the Blessed Virgin Mary to God’s invitation for her, which others are encouraged to imitate.

Prayer for vocations is a good start but it should be followed by action, and that too is part of the Rosary Rally plan.

In recent years the Philadelphia Archdiocese has seen more success from the hard work of promoting vocations to the priesthood than most dioceses, but it is not enough to fill the need for priests.

During the Rosary Rally, Father Stephen DeLacy, the director of the archdiocesan Office for Vocations for the Diocesan Priesthood, will give a presentation on a new initiative in the archdiocese to promote and support religious vocations.

He will officially unveil plans in conjunction with Serra International to create numerous parish-based vocation committees in the archdiocese.

”Religious vocations rise and fall with the interest of the laity,” Father DeLacy said, “and I do think things are picking up.”

One sign that gives evidence to his belief is the uptick in the number of seminarians studying for the archdiocese at St. Charles Seminary. In the current academic year, the seminary’s enrollment hit a high of 81 Philadelphians, signaling a level not seen in many years and a trend that has been rising since 2015.

Serra International, which traces back to 1935, is a lay organization dedicated to fostering and promoting vocations to priesthood. It also assists its members in recognizing and responding to God’s call to holiness in Jesus Christ and the Holy Spirit in their own lives.

To this end Serra Clubs work with bishops, dioceses and religious vocations directors. In addition to participating in many group activities Serrans work on their own time affirming seminarians, priests and religious.

Two primary goals of the Rosary Rally are to increase the number of people volunteering in the work of promoting vocations and to grow the number of clubs, perhaps up to one for each of the archdiocese’s 12 regional deaneries.

Learn more details and how you can join in “Celebrating Mary’s Yes” and share the work of building a culture of vocations at the website of the Vocations Office.

NEXT: Unity of Mass comes to Spanish-speaking Catholics at home