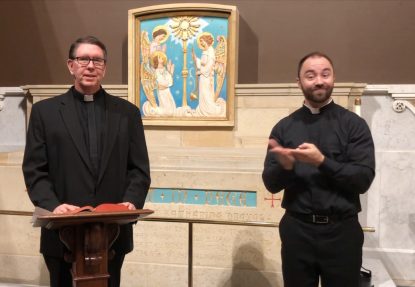 Father Matthew Guckin, left, presents in the first night of the Archdiocese of Philadelphia’s virtual Lenten retreat, as Father Sean Loomis translates the talk into American Sign Language, at the Shrine of St. Katharine Drexel in the Cathedral Basilica of SS. Peter and Paul. The retreat continues each night this week at 7 p.m., through April 4.

“The Power of Faith and Hope” was the theme of the first video in a virtual retreat that began Monday night, March 30. It is being conducted by the Archdiocese of Philadelphia during this most trying Lenten season in the face of the ongoing coronavirus pandemic.

The retreat, which consists of six short conferences each night at 7 p.m. beginning March 30 and ending April 4, the eve of Holy Week, features a priest, religious or lay presenter offering pre-recorded videos set at the Shrine of St. Katharine Drexel in the Cathedral Basilica of SS. Peter and Paul.

Because of the current restrictions on public gatherings this retreat has no live congregation but anyone can join it through Archbishop Nelson Perez’s Facebook page and other social media channels including Twitter and Instagram, as well as the archdiocesan website, ArchPhila.org, or CatholicPhilly.com.

Many did join the retreat’s first conference on March 30. Statistics showed that as of Tuesday morning, March 31, a total of 13,778 people watched the virtual retreat, with 6,900 viewing in English and 3,200 in Spanish on the archbishop’s Facebook page. The remaining 3,678 watched the video on ArchPhila.org and CatholicPhilly.com.

In introductory remarks on Monday night’s video, Archbishop Perez said, “Even when Jesus carried his cross on Calvary he never gave up hope, because he knew that he was called by God his Father to bring his people the joy that we celebrate and rejoice in on Easter.”

The presenter for the first night was Father Matthew Guckin, accompanied by American Sign Language interpreter Father Sean Loomis. Father Guckin is director for Catholic Mission and Identity for the archdiocesan Office for Catechetical Formation and parochial administrator of St. Francis de Sales Parish in Philadelphia.

In a short Scripture reading Father Guckin quoted from Matthew 17:20: “If you have faith the size of a mustard seed, you can say to the mountain, ‘Move from here to there,’ and it will obey you.”

Everyone needs the faith that can move mountains and it is not easy to come by. Citing a few examples from his own ministry, Father Guckin mentioned a former student whose wedding he officiated at and who is now a nurse and expecting a baby.

Given her profession and the possibility of a coronavirus infection and passing it on to her husband and unborn child, she was afraid.

“Fear is without question our biggest event at this time,” he said. “The only way to properly confront and defeat this fear is with love.”

How one goes to God, Father Guckin suggested, is very personal and unique to each person.

For himself, “I have a particular devotion to Our Lady Undoer of Knots,” he said. “I keep up on that devotion on a daily basis.”

For others he suggested a devotion might be a novena to Our Lady, or the rosary, reviewing the Mass readings of the day.

Not only is a person of faith invited to go to God, but also “to cling to God,” Father Guckin said. “We can’t just simply go to God and then forget about God.”

“When we walk in darkness,” Father Guckin said, “we are called cling, to trust in the God who created us, for God is love and love casts out all fears.”

Upcoming speakers on the virtual retreat include:

— Deacon Anthony Willoughby of St. Ignatius of Loyola Parish, Philadelphia, speaking March 31 on “The Power of Hope in a Time of Uncertainty;”

— Megan Mohan, associate director of Anthem, the archdiocesan ministry for youth and young adults, speaking April 1 on “What Are the Sources of Faith and Hope That We Can Tap into During This Time?”

— Father Eric Banecker, parochial vicar of St. Pius X Parish, Broomall speaking April 2 on “What Does It Mean to Be the ‘Tree Planted by the Waters’ During These Times?”

— Sister Maeve Nativitas of the Sisters of Life speaking April 3 on “When the Heat and Drought Come: How to Respond When Faith and Hope are Tested;” and

— Eustace Mita, co-founder and chairman of ManUp Philly, speaking April 4 on “How Difficult Times Cause Greater Fruit to Emerge in Our Lives.”

Presenting on the first night in a separate video on the same topic as Father Guckin but speaking in Spanish was Father Matthew Biedryzcki, parochial vicar for the Cathedral Basilica of SS. Peter and Paul.

Also participating in the virtual retreat as an ASL interpreter is Sister Kathleen Schipani, I.H.M., director of the archdiocesan Office for Persons with Disabilities and the Deaf Apostolate.

Watch CatholicPhilly.com for new presentations in the series updated every day at 7 p.m., or catch up on previous segments any time, here.