Archdiocese plans for renewal of parish life after pandemic

An archdiocesan task force convened by Archbishop Nelson Perez has launched "Arise: Restoring Catholic Life after the Pandemic," an initiative to provide comprehensive guidance to parishes on reintegrating new and returning members as COVID-19 restrictions are gradually lifted. (Image courtesy of the Archdiocese of Philadelphia)

As the nation considers how to eventually lift COVID-19 restrictions, the Archdiocese of Philadelphia has launched a new initiative to plan for parish life after the coronavirus.

The project seeks to reintegrate clergy and faithful into active, in-person participation in Masses and parish activities after months of social distancing to prevent the spread of the virus.

The crisis presents “an opportunity to reach out pastorally and with an evangelizing heart” to others, said Archbishop Perez, who addressed some 1,000 clergy, religious and parish leaders during an April 22 introductory webinar on the Arise project.

The process of reopening churches and reengaging the faithful will be gradual, with timing and details dependent on the evolving directives of city and state officials.

At each step, the Arise initiative will provide guidance and resources for parishes in several key areas, including “worship, catechesis, evangelization and communications,” said task force co-chair Father Dennis Gill, director of the archdiocesan Office for Divine Worship. 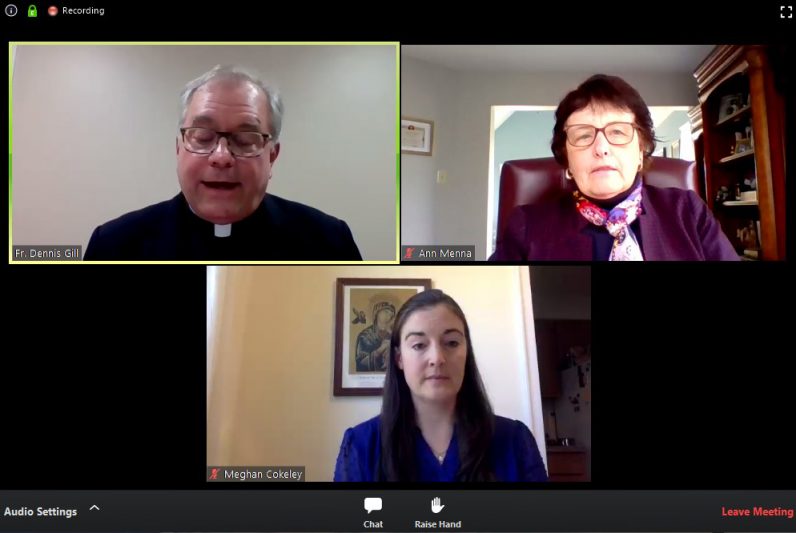 Archdiocesan post-pandemic task force members Father Dennis Gill (director, Office for Divine Worship), Ann Menna (director, Office for Catechetical Formation) and Meghan Cokeley (director, Office for the New Evangelization) addressed more than 1,000 clergy, religious and pastoral leaders at an April 22 webinar that marked the launch of “Arise: Restoring Catholic Life after the Pandemic,” an initiative that will assist parishes in reengaging the faithful as COVID-19 restrictions are gradually lifted. (Archdiocese of Philadelphia)

While faithful can look with hope to once again worshipping together, the return to parish life “really can’t be ‘business as usual,’” said task force member Father Thomas Higgins, pastor of Holy Innocents Parish in Philadelphia. “It is a ‘new normal,’ and we have to do our best to develop that and to help our people embrace it as fully as possible.”

Livestreamed liturgies at a ‘graced moment’

The pandemic has provided a “unique evangelization moment” in which the “movement of Christ from the tomb to the Resurrection” has taken on a profound new significance for many, said task force co-chair Meghan Cokeley, director of the Office for the New Evangelization.

Although Mass attendance has plummeted in recent decades, livestreamed liturgies — which have become widely available after last month’s suspension of public Masses — have drawn strikingly high numbers of viewers.

Since mid-March, more than 470,000 have watched the livestreamed Sunday Masses from the Cathedral Basilica of SS. Peter and Paul.

Views are also up in other parishes, with one pastor telling Cokeley that “more have been watching Mass than have been in church” for quite a while.

Similarly, thousands of people have consistently joined online devotions such as a nightly rosary and Divine Mercy novena that Cokeley organized along with a host of video retreats and reflections.

“We have a really graced moment here,” said task force member Ann Menna, who directs the archdiocesan Office for Catechetical Formation. “We can invite both the believer and the non-believer back.”

Moving from screen to sanctuary

But for both groups, the move from the screen to the sanctuary will be a complex one that balances a mix of interests and expectations against public health concerns.

At the same time, he stressed that the transition must align with government efforts to limit person-to-person transmission of the novel coronavirus, a vaccine for which is still at least 12 to 18 months away, according to a number of medical experts.

In the interim, officials such as Pennsylvania Governor Tom Wolf are seeking to roll back stay-at-home orders in phases, beginning with areas least affected by the outbreak.

“As the restrictions are lifted, we will provide directions for the celebration of Mass,” said Father Gill. “Honestly, we’re not sure what (it) will look like at this point. We will need to keep in place group size limitations and social distancing.”

Churches should “be open for some time during the day for people to come and pray” privately and for eucharistic adoration, said Father Gill.

Until parishes can fully reopen, he encouraged clergy to make livestreamed celebrations of the Mass, devotions and “other opportunities for prayer (as) widely available as possible.”

Yet he cautioned against fostering a perception that digital transmissions of faith practices could be considered a substitute for on-site worship and prayer.

“(Pope Francis) reminded us just recently that we’re not to make the mistake that virtual participation is the same as in-person,” said Father Gill. “But at the same time, we recognize the great value and spiritual benefit to so many people because of the technological possibilities.”

Conveying that nuanced message to both active and inactive parishioners is crucial, especially after weeks of “watching Mass in their pajamas while drinking their morning coffee,” said Father Higgins.

“The sacraments … are meant to be celebrated in the flesh, in person,” he said. “Besides giving praise to God, the Eucharist is meant to build community among the faithful.”

“Interacting with people online is very different from being physically present,” he said, observing that virtual communications “give us an out” by allowing individuals to “half pay attention” or to project a tailored image on social media platforms.

Even without a pandemic, he said, in-person gatherings are “risky” since they are “full of awkward moments and imperfect interactions.”

As a result, said Father Banecker, “the challenge will be getting … individuals to believe in the value of a worshiping community.”

‘Arising’ to the challenge

Father Gill, Cokeley and Menna, who hosted the April 22 webinar, said the Arise resources are intended to meet precisely that challenge.

Menna said while she was grateful for “the technology that allowed instruction in the faith to continue,” catechesis “can’t just be out there in cyberspace” but must nurture “intimacy with Jesus Christ.”

As parish life eventually emerges from the pandemic, “we will be asked to journey with people” just as the resurrected Lord encountered the disciples on the road to Emmaus, said Menna.

“We need to meet them as Jesus met them, listen to them … (and) use the familiar … to tell their story within the context of salvation history,” she said.

Parish communications are vital to this mission, Cokeley said, advising pastoral leaders to “start strategizing … how we can help people bridge from livestream to in-person.”

An April 30 webinar has been scheduled by the Arise team to guide parishes in setting up an effective electronic communications plan on short notice.

Priests, religious, catechists and pastoral leaders are urged to stay connected with Arise developments by ensuring they are enrolled in their respective archdiocesan email lists from the offices for clergy, consecrated life, catechetical formation and the new evangelization.

Above all, said Father Banecker, restoring Catholic life after the pandemic is “a challenge not so much of strategies and structures, but about the human heart,” and the “personal conversion we are all called to” as well as “the need to reach out in mercy to all.”

The faithful are up to the task, said Archbishop Perez.

“We are a resilient people,” he said. “We are a people of great hope.”

For more information about “Arise: Restoring Catholic Life after the Pandemic,” visit archphila.org./arise.

NEXT: The young shop for elders to keep them safe from virus