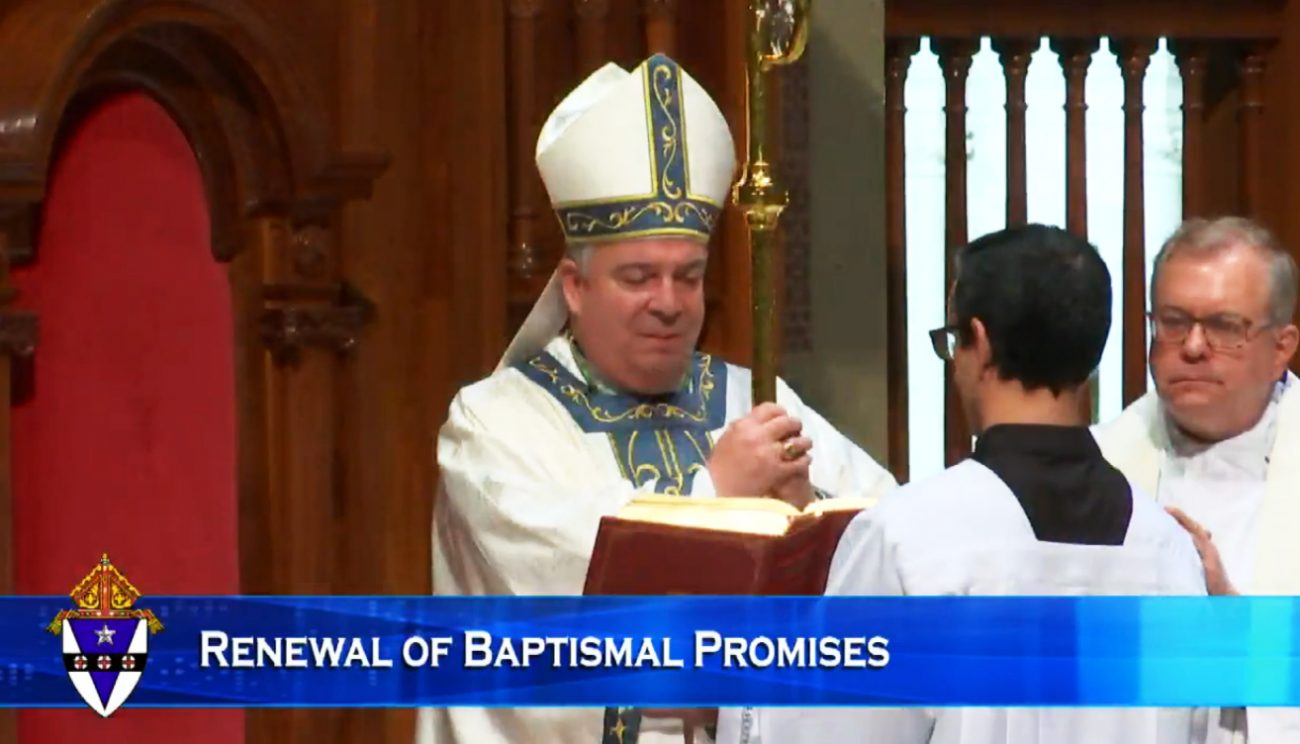 Archbishop Nelson Perez leads the faithful from their homes in the renewal of their baptismal promises during livestreamed Easter Sunday Mass, April 12 from the Cathedral Basilica of SS. Peter and Paul. The Mass was closed to the public due to restrictions on public gatherings to prevent spread of the coronavirus.

While they practiced social distancing to mitigate the spread of COVID-19, more than 470,000 people in less than a month participated digitally in the livestreamed Sunday Masses from the Cathedral Basilica of SS. Peter and Paul, Philadelphia.

As of Monday, April 13, the online responses of worship and information during the coronavirus crisis since mid-March have totaled 594,842 views. That includes the livestreamed Masses, a six-day online retreat and almost 21,000 views of Archbishop Perez’s videos of encouragement for the faithful in March.

The Archdiocese of Philadelphia began livestreaming the 11 a.m. Sunday Mass on March 15, three days after the Pennsylvania bishops dispensed the faithful from the Sunday obligation to attend Mass. Public Masses were suspended on March 18 until further notice.

Both measures were in response to directives of government and health officials trying to prevent the spread of the deadly coronavirus.

The faithful are taking advantage of the virtual gatherings while complying with Pennsylvania’s stay-at-home order and national directives to avoid gatherings of 10 or more.

From that first Sunday until Easter Sunday, April 12, a total of 470,842 views were recorded on all streaming platforms. 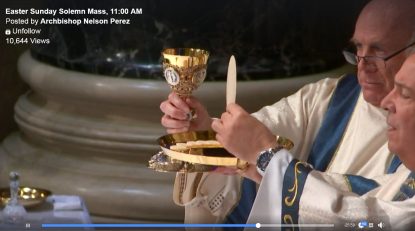 The archdiocese plans to continue the livestream Masses for the foreseeable future via Vimeo, Archbishop Nelson Perez’s Facebook page, CatholicPhilly.com and the Archdiocese of Philadelphia’s website and Facebook page.

In addition to livestreamed Sunday Masses, the archdiocese also livestreamed its Holy Week liturgies and presented a video Lenten retreat series titled, “The Power of Faith and Hope in Times of Uncertainty: A Virtual Lenten Retreat.”

The virtual retreat spanned the six days before Holy Week, from March 30 to April 4, and featured dynamic ordained, religious and lay speakers from throughout the archdiocese. Videos were posted on the archbishop’s Facebook page and Instagram, CatholicPhilly.com, and the Archdiocese of Philadelphia’s website.

Archbishop Perez’s video introduction to the retreat received over 36,000 views. The retreat videos themselves were viewed over 67,000 times, with an average finish rate of 57%. According to media consultant Daniel Kearns, who organizes the archdiocese’s livestreams and videos, that percentage is considered very good for online videos.

The Mass for Palm Sunday, the first liturgy of the week, garnered more than 57,000 views as of Tuesday, April 7.

It was followed on Monday by the livestreamed Chrism Mass, which is traditionally celebrated on Holy Thursday. The Mass typically gathers hundreds of clergy and laity in the cathedral. This year the Mass drew more than 36,000 digital views.

In addition to the consecration of the holy oils used in sacraments, priests traditionally renew their ordination promises at this Mass. Catholics in the region took the opportunity to fill the Facebook livestream’s comment section with messages thanking parish priests and deacons for their ministry.

Holy Week liturgies also included the Mass of the Lord’s Supper on Holy Thursday, the Passion of the Lord on Good Friday and the Saturday evening Easter Vigil Mass.

Viewers found creative ways to participate in the Facebook comments section, extending digital messages of peace during the Sign of Peace, answering the Prayer of the Faithful with a typed “Lord, hear our prayer” and submitting prayer intentions.

Many Facebook viewers hailed from the Philadelphia Archdiocese, but others watched from other states including Florida, Oklahoma, Maryland and New Jersey.

Incoming viewership statistics are high indeed, but the actual number of souls being reached may be much higher.

The statistics do not account for families, roommates, or religious communities who are living together under one roof and may view liturgies together. If a family of four watches Sunday Mass together on one device, it counts as one view despite the fact that four people are participating.

The more than 67,000 views of the online Lenten retreat did not include a count from Instagram views. In addition, the livestream statistics do not account for the Easter Sunday Mass broadcast live by television station WHYY, nor by Channel 6, which airs a prerecorded Mass each Sunday at 5:30 a.m.

In addition to Masses from the cathedral, parishes throughout the archdiocese are livestreaming and posting prerecorded videos of their Masses and other devotions. Find an evolving list of these liturgies here.

“While things may look and feel different during these uncertain times, I want to be very clear that the Catholic Church in Philadelphia is not closing down,” said Archbishop Perez in the March 17 announcement to suspend public Mass.

The recent statistics show the church certainly has not shut down. As stay-at-home orders continue, the faithful continue to utilize the gift of technology when connecting in a spiritual communion. 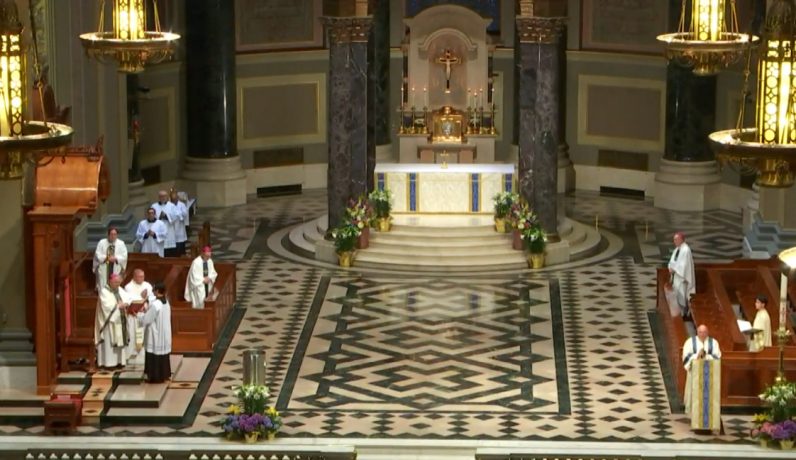 A screen capture shows the sanctuary of the Cathedral Basilica of SS. Peter and Paul, Philadelphia, during Easter Sunday Mass April 12, which was closed to the public and livestreamed on the internet.

PREVIOUS: Knights of Columbus vow to leave no neighbor behind

NEXT: Domestic violence ‘a pandemic within a pandemic,’ says Catholic psychologist