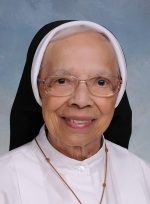 Sister Maria Angelita Ortiz, O.S.F., died April 10 in Assisi House, Aston. She was 88 and had been a professed member of the Sisters of St. Francis of Philadelphia for 66 years.

Sister Angelita (the former Lucia Esther Ortiz) was born in Barranquitas, Puerto Rico, and was a graduate of Academia Monseñor Willinger High School. She entered the congregation in 1954 and professed her first vows in 1957. Sister Angelita earned a B.S. in education from Villanova University. She ministered primarily in education and parish ministry.

Sister Maria Angelita ministered for 37 years in her native Puerto Rico, primarily in Barranquitas. During her many years at Convento San Francisco, she was engaged in teaching and catechetical work with high school students, pastoral work, and served as formation director.

She also spent several years as a caregiver for a family member. During her final years in Barranquitas, she ministered at Las Villas Chapel.

During her seven years in the Diocese of Allentown, Sister Maria Angelita taught at St. Francis School in Allentown and ministered at St. Francis Orphanage in Orwigsburg.

Sister Angelita served for 14 years in the Archdiocese of Philadelphia, where she worked with the Hispanic apostolate at St. Bonaventure Parish, Philadelphia.

She also served in ministry at St. Alice Parish in Upper Darby and in local house ministry at Our Lady of Angels Convent in Aston.

In 2017 she moved to Assisi House in Aston where she served in prayer and hospitality ministry until her death.

All services will be private. Sister Angelita is survived by her sisters Maria De La Cruz Ortiz; Carmen Milagros Disla and her husband, Jose Disla; her nieces and nephews; and by her Franciscan family.