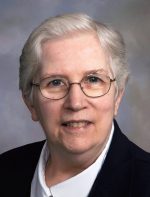 Sister M. Patricia E. Youtz, I.H.M., died April 6 in Camilla Hall, Immaculata. She was 79 and in the 61st year of her religious life.

She was the daughter of Walter and Mary (Wilton) Youtz. The family settled in St. Joachim Parish in Philadelphia and Patricia attended the parish school then Little Flower High School, from which she graduated in 1958.

Later, as a sister, she earned her degree in elementary education from Immaculata College, followed by her M.A. in religious studies from St. Charles Borromeo Seminary.

That same month she went to St. William School and during her five years there she taught students in grade four, six, seven and eight. From 1966 to 1982, she taught eighth graders at St. Monica, Philadelphia; St. Joseph, Aston; Holy Savior, Norristown; and St. Thomas More in Arlington, Virginia.

During this period she also served as superior and principal at Our Lady of Ransom in Philadelphia from 1986 to 1989.

Later she assisted the students and faculty at St. Martin of Tours School, Philadelphia, and at St. Alice School, Upper Darby.

Sister Patricia assisted at Bishop Shanahan High School from 1998 to 2005. In August of that year she resided at St. Agnes Parish in West Chester while on home care for one year.

From 2006 to 2011, Sister Patricia was a tutor at St. David, Willow Grove, for one year followed by four years at St. Charles School in Bensalem as library assistant.

Sister Patricia went to Camilla Hall in 2011 where she lived out her final years of loving service, prayer, and kindness until her death.

The funeral Mass was celebrated privately on April 14. A public Memorial Mass will be celebrated at a later date.