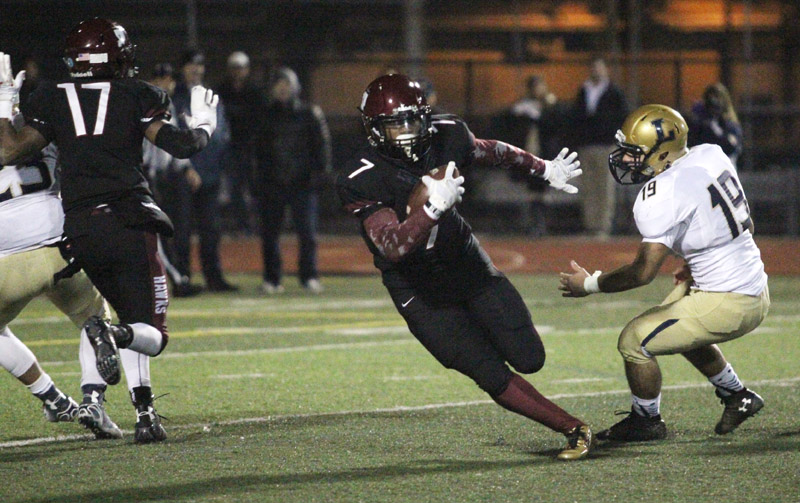 D'Andre Swift puts his trademark move on a defender in a 2014 game for St. Joseph's Prep. Swift was drafted by the Detroit Lions April 24 in the 2020 NFL draft. (Photo by Sarah Webb)

It was one of countless times that he had corralled a football and used his uncanny vision, instincts and legs to do something so athletically crazy on the field that it defied description.

Then a senior running back at St. Joseph’s Prep, D’Andre Swift returned to the sidelines and received animated congrats from numerous mouth-gaped teammates.

“You’re gonna do that in the NFL someday,” said a non-team official.

Swift smiled that textbook grin of his.

On the afternoon of April 24, sitting in quarantine with family and friends, Swift’s career objective came to fruition.

“With the 35th pick in the 2020 NFL draft, the Detroit Lions select … D’Andre Swift, running back, Georgia.”

With those words from NFL commissioner Roger Goodell, Swift was formerly a part of the National Football League. The only thing left now is for his agent to solidify a contract, hopefully be able to work out soon with his new teammates, coaches and staff once the global COVID-19 pandemic has subsided and continue to hone his God-given gifts at the ultimate level for football competitors.

Weeks earlier, Swift spoke with the media as part of the NFL pre-draft combine Q and A. Several of his answers reverted to his Philadelphia roots, where he grew up and first touched a football before he could even definitively recall.

“That’s where I get my mentality from,” said Swift. “Philadelphia is a tough mindset. I’m a gritty guy. I compete. I love to compete. I never back down from a challenge. Everything Philly, that’s in me. That’s why I play the game the way I play it.”

Before embarking on a collegiate career at the University of Georgia, where he forged his name among the national standouts during his three seasons before declaring for the NFL draft, Swift set stat sheets aflame during his time as a Hawk.

After leading the Hawks to a state championship victory as a senior in the fall of 2016, Swift was asked a simple question: “How do you do it?”

After supplying the necessary plaudits about his unselfish linemen, skill players and coaches, Swift took a breath and stayed silent for about five seconds.

Gabe Infante, now an assistant at Temple University: “His talent is only dwarfed by his character. Loved by all who have had the pleasure of really knowing him, he is a once-in-a-coaching-career talent. He and his family are first class, and I am grateful to have coached him and to call his family, my family. Can’t wait to see what he will accomplish in the NFL.”

Joe Frio, Class of 2015:  “When Dre showed up his freshman year — my junior year — we all knew he was gonna be good just from watching him in practice, but after our first scrimmage against Imhotep at Tall Pines, we all realized he was going to be different because he was so good against a good team and it was his first high school game ever.

“What I liked most about Dre as a teammate was how easy he was to get along with and how humble he was. His confidence was rooted in how hard he worked and not in what people said about him.”

Dawson DeIuliis, Class of 2018, now playing at Princeton University: “Dre’s work ethic, leadership and humbleness made everyone around him better and made us a stronger team. He set an unbelievable example both on and off the field. When the best player is also the hardest worker, it gives you even more motivation to be the best player possible.”

Marquez McCray, Class of 2018, now playing quarterback at Sacred Heart University: “It’s like having your older brother you always looked up to playing next to you. He wants the best not only for himself but for you, and he brings the best out of you.”

Phil O’Connor, Class of 2018, now playing linebacker at the University of Richmond: “Having Dre as a teammate gave our whole team a tremendous amount of confidence going into games. Being able to go up against him in practice every day made the games much easier. He’s a hard worker that loves the grind.”

Former Prep secondary stalwart John Reid (Penn State) was selected in the fourth round (pick 141) by the Houston Texans. Former Prep standout offensive lineman Jon Runyan Jr. (Michigan) will be blocking for QB Aaron Rodgers of the Green Bay Packers after being nabbed in the sixth round (pick 192).
***

NEXT: No spring sports but plenty of positivity among athletes