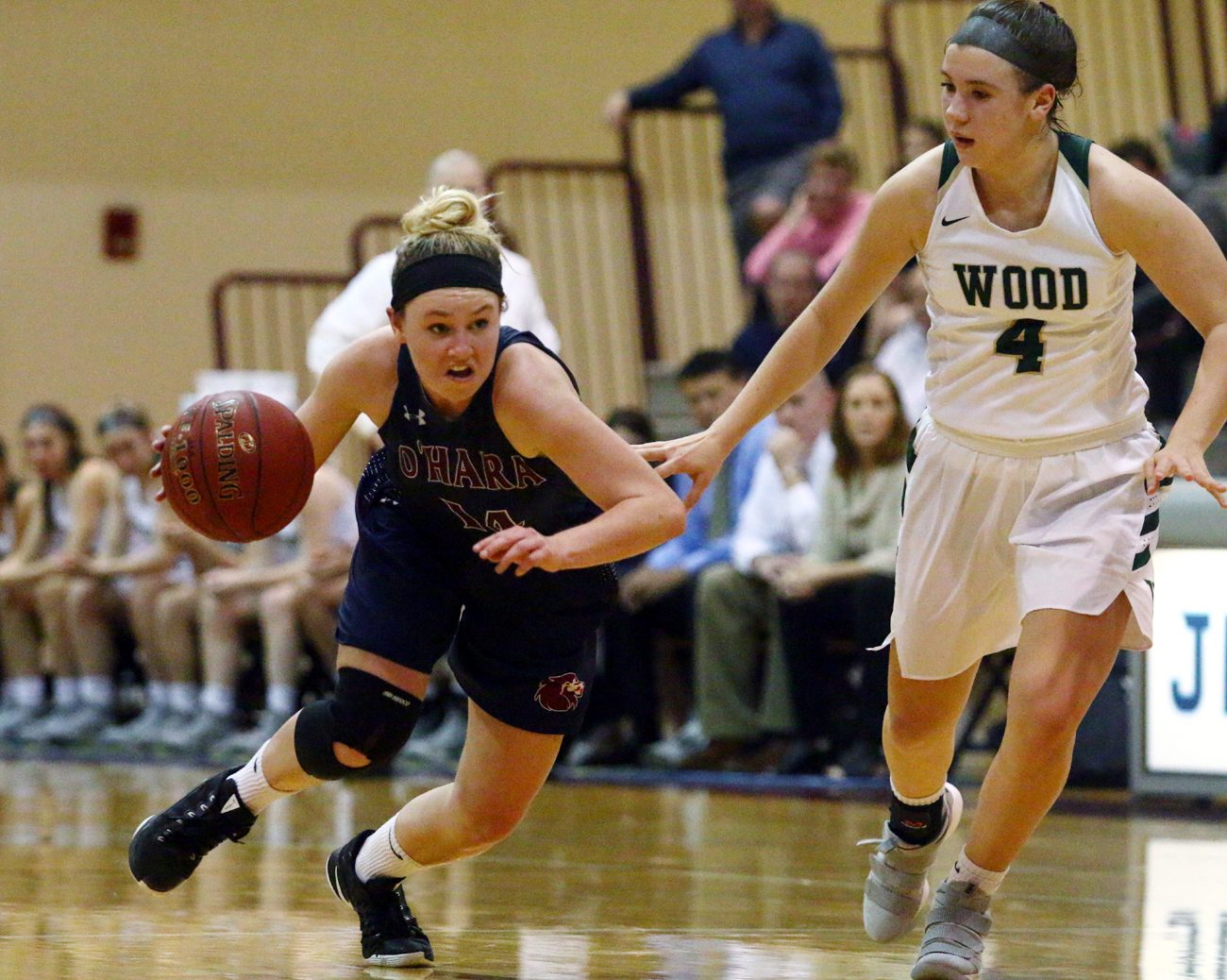 Kaitlyn Orihel of Archbishop Wood's girls' basketball team (right), who saw her season ended in the quarterfinals of the PIAA state playoffs, said the coronavirus pandemic "has taught me to be more appreciative and not take anything for granted.” (File photo by Sarah Webb)

If everything had gone according to plan, the most pressing dilemma this weekend for athletic directors, coaches, and players would have been the lousy weather. Steady rain Friday, swirling winds Saturday.

Instead, there has been no baseball this spring. Or softball. Or track and field. Or lacrosse. Or golf. Or boys’ volleyball. Instead of wins and losses, league standings, batting averages, the clicking of stopwatches, etc., the only statistics we hear about ad nauseam are those associated with the coronavirus that continues to shackle most of the world.

With tragedy and trauma, however, comes the opportunity for perspective. Several athletes and coaches that represent some of the Philadelphia Catholic League schools were asked to provide their insights about how area residents might look at potential benefits from this pandemic.

“I believe that everything happens for a reason, and I believe that the reason this is happening is because people around the world needed to get closer to God,” said Little Flower softball standout Courtney Sherwood. “People were so self-involved and needed time to slow down and reflect on themselves and talk to God more.”

A parishioner of St. Cecilia’s in Philadelphia’s Fox Chase section, Sherwood was the reigning PCL softball Most Valuable Player and looking forward to leading a Sentinels squad that, on paper at least, could have held their own in a wide-open Catholic League.

Instead, Sherwood’s next organized team event will be meeting her new mates at Kean University.

“A lot of good is coming from this quarantine,” said Sherwood. “There is less crime, waters are getting cleaner, and healing is happening. People are also learning how valuable being with their friends and family are. People are also discovering new talents, which I believe is really cool. Even though there are disappointments coming from the quarantine, we have to focus on the good.”

“This virus has changed many lives and even ruined some in such a short span of time,” said Furman, a member of St. Mary Magdalen Parish in Media. “Staying true to our faith has been big for not just me, but I think for everyone struggling, especially the seniors that had their year cut short. Knowing we will come out on the other side stronger and better than before is something that is keeping people going.”

La Salle senior Jake Gandolfo, a parishioner of Mary Mother of the Redeemer in North Wales, is an All-Catholic kicker on the football team who will be taking his booting abilities to Gettysburg College. He also would have been one of the Explorers’ starting pitchers this spring and would have had a terrific chance of finishing his high school career with a PCL title.

“I think it’s definitely tested our patience, faith and trust in God,” said Gandolfo. “But with the amount of down time, it’s also been a pristine opportunity to try and connect or reconnect with God.”

John W. Hallahan coach Brian Sitongia had been looking forward to this year’s softball season since the end of last spring. His team was packed with experience and expected to make a push atop the standings and perhaps deep into the playoffs.

When he found out that the season was cancelled, he had a message for his disappointed players.

“I think that life is just not fair sometimes, but that we will all get through this and persevere,” said Sitongia. “This is devastating for us all. This team had very, very big hopes and aspirations.”

Archbishop Wood junior basketball star Kaitlyn Orihel, a three-time, first-team All-Catholic who recently announced that she will attend Villanova University, suddenly felt fortuitous even though her hoops season was cancelled after having reached the PIAA Class 5A state quarterfinals.

After considering what the spring athletes were enduring, Orihel felt grateful to have at least experienced an entire regular season, a Catholic League championship loss to West Catholic, a District 12 title, and two victories in the PIAA tournament with a more-than-probable chance to capture a state crown.

“This is a very hard time for everyone and it was really sad to hear about the cancellation of the season,” said Orihel. “But this has reminded me to always trust that God has a plan for us – even if we don’t understand it.

“We should take time every day to reflect on everything he has given us and not focus on what we don’t have right now. This experience has given me a different perspective and has taught me to be more appreciative and not take anything for granted.”

NEXT: Once he retires, NFL QB to coach at Catholic high school