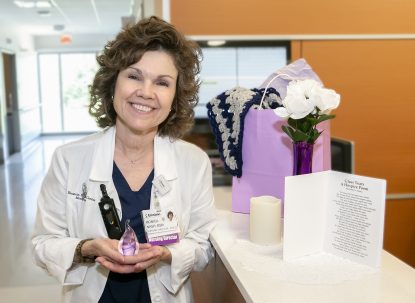 Nurse Monica Nash views her work to heal patients at Einstein Montgomery Medical Center — especially those suffering from coronavirus at this time — as a vocation along with her role as an extraordinary minister of holy Communion at St. Teresa of Calcutta Parish, Limerick. (Courtesy of Einstein Perspectives)

Staff at Einstein Medical Center Montgomery and St. Teresa of Calcutta Parish, Limerick, found a way to distribute the Eucharist to sick patients during Holy Week, with respect to hospital visitation restrictions and proper social distancing.

The hospital in East Norriton had decided to restrict visits to patients in order to protect their families from the coronavirus. Patients and loved ones are understandably missing one other, and hospital staff noticed this worsening as Holy Week approached, according to nursing director Monica Nash.

She oversees the hospital’s surgical, medical, inpatient hospice and oncology units and is also an extraordinary minister of holy Communion at St. Teresa of Calcutta Parish.

“We have some truly sick patients here. They’re missing their families and now they’re missing the spiritual aspect, and it doesn’t matter (if) you don’t have a formal religion; everyone is spiritual,” Nash said.

In response to this spiritual need, Einstein’s hospice chaplain compiled a list of various online spiritual services from local faith communities. The result was beautiful, said Nash, but the patients’ separation from holy Communion weighed on her heart.

“Holy Week is very special because it points out everything that Jesus did for us, and ultimately all of that is the holy Eucharist,” she said.

She called her brother-in-law, James Nash, a fellow parishioner at St. Teresa of Calcutta Parish who will be ordained a permanent deacon in June 2020.

Nash told him, “I know right now we’re not distributing holy Communion and we don’t allow eucharistic ministers in (the hospital), but would there be any way I would be able to give holy Communion?”

“He said, ‘You know what, we have pyx. We have some holy Eucharist. I think we could make this work,” said Nash. A pyx is a small container used to transport the eucharistic hosts outside of church.

In fact, Nash said she received enthusiastic support from everyone. When she became unsure if she could distribute holy Communion in the large hospital by herself, she enlisted the help of her fellow hospital directors.

At the weekly directors’ meeting, Nash asked if the directors could inquire if any in their staff were Communion ministers who would be willing to help. By the end of the week, she had five volunteers.

Given the restrictions on visitors and spiritual support persons, everything came together quickly, Nash said. It was truly a team effort.

External support came from James Nash at a distance. He made sure all volunteers felt comfortable distributing Communion in a hospital setting, and since he was unable attend on the day of the distribution, he provided the liturgical book with the proper prayers, even highlighting page numbers.

On that day Nash picked up the Eucharist on her way into work, and the volunteers made use of the hospital’s meditation room to pray the gathering prayer.

One eucharistic minister volunteer was an OB/GYN physician who made time on his schedule just for the occasion.

“It was best,” said Nash. “He didn’t just deliver babies, he delivered the holy Eucharist.”

Special attention was paid to social distancing and personal protective equipment (PPE). The extraordinary ministers went out in pairs to designated areas of the hospital. The volunteer department had collected the Catholic census in advance, and the ministers checked with the patients’ nurses to ensure they were able to receive.

The resulting encounters were beautiful, Nash said. She estimated 35 to 40 people were able to receive the Eucharist.

One particular encounter will stick with Nash forever.

As she entered the room of a elderly woman, she saw the patient was with her physician. Upon asking the physician if the patient could receive the Eucharist, Nash said the physician responded, “You have to make it fast because she’s on her way to ICU right now. She’s really sick.”

Nash gave the woman holy Communion, who said, “Thank you. You made me stronger.”

When Nash went back the next morning to check on the elderly woman, she found the patient’s condition had improved and she longer needed to be transferred to intensive care.

Of the experience as a whole, Nash said, “It just was a missing piece for Holy Week. There were people that have been in here and they were suffering and they were scared.”

The entire Holy Week experience “will stick with me for a very, very long time,” said Nash. “If you could just see those faces. It was really special.

“This isn’t just a job what we do here, it’s a vocation. And to bring something like that together just felt so wonderful.”