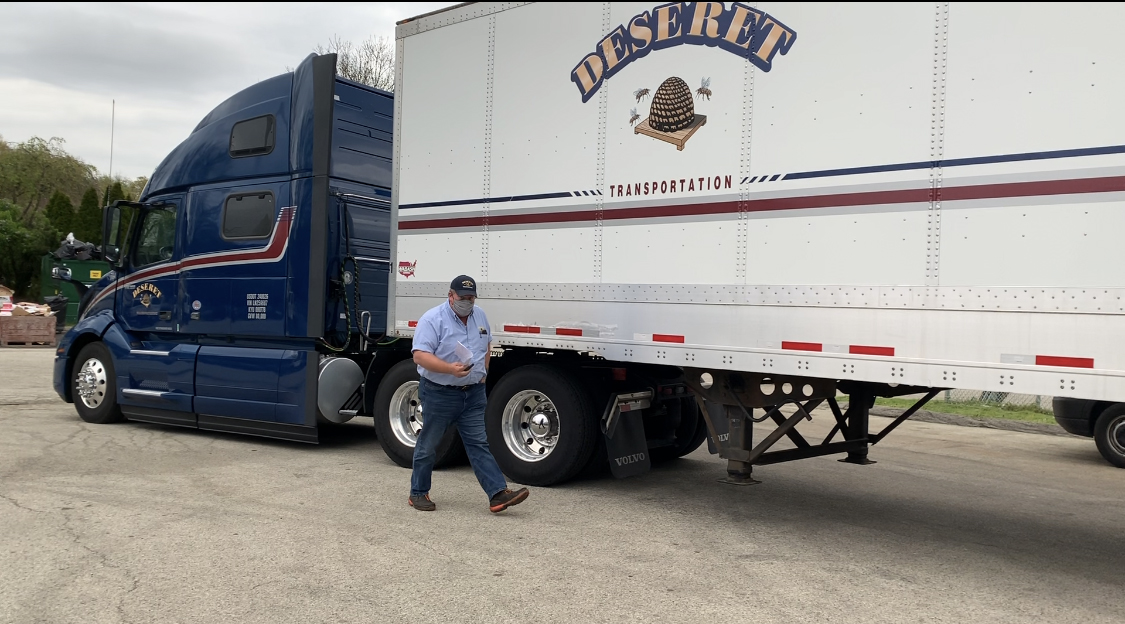 A driver for Deseret Transportation prepares to unload 40,000 pounds of food donated by the Church of Jesus Christ of Latter-day Saints to archdiocesan Nutritional Development Services (NDS) and its nonprofit partner Caring for Friends (CFF) at CFF's Northeast Philadelphia warehouse, April 30. Both NDS and CFF have experienced increased demand for their hunger relief services due to the coronavirus pandemic. (Photo by Gina Christian)

Archdiocesan food pantries, strained by increased demand due to the coronavirus pandemic, have received some much-needed restocking thanks to a major donation from the Church of Jesus Christ of Latter-day Saints.

On April 30, a semi-tractor trailer filled with 40,000 pounds of macaroni, apple sauce and other non-perishables pulled up to the Northeast Philadelphia warehouse of Caring for Friends (CFF), a food outreach that serves seniors, those experiencing disabilities or homelessness, and struggling families. The goods were marked for archdiocesan Nutritional Development Services (NDS), with whom CFF shares its warehouse as part of a decades-long collaboration against food insecurity in the area.

The delivery, coordinated through Catholic Charities USA (CCUSA), was dispatched the week prior from Salt Lake City, Utah, where the Latter-day Saints’ church is headquartered.

NDS executive director Lizanne Hagedorn estimated that the items would translate into roughly “150,000 to 200,000 meals.”

Elder and NBC10 news anchor Vai Sikahema, the Latter-day Saints’ highest ecclesiastical leader in the Philadelphia area, said that the donation recognized “the tremendous work of Catholic Charities in our communities” amid “the enormous burden placed on their resources” in recent weeks.

NDS and CFF have been working overtime to address a surge in requests for food assistance driven by the economic backlash of the global health crisis.

“The need is dire,” said NDS driver Don Devlin, who distributes supplies to more than 40 pantries supported by the outreach’s Community Food Program. “Every day there are new clients coming in for food. Every day it’s someone else getting laid off as COVID-19 continues.” 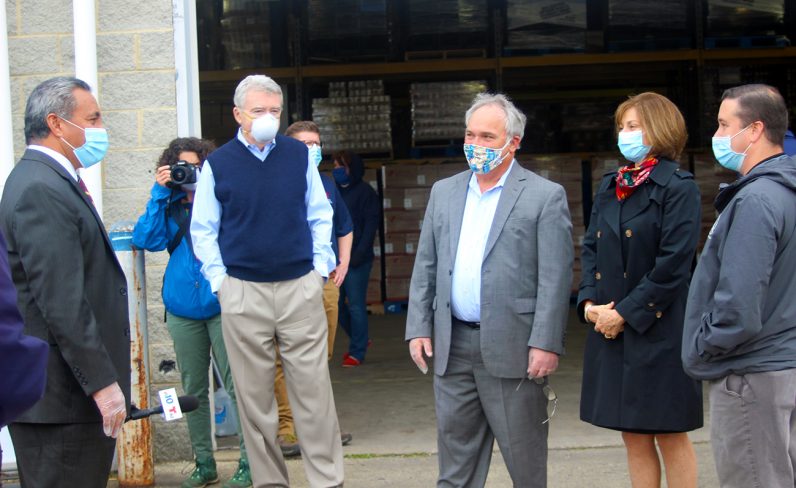 “There are lines around the block,” he said, estimating that his agency’s client base has “gone up four to 10 times, depending on the site. People are out of work.”

Since mid-March, more than 30 million Americans (about 18.6% of the nation’s labor force) have filed first-time unemployment claims, as businesses — shuttered due to stay-at-home orders — have laid off or furloughed staff. An estimated one in five workers in Pennsylvania are now jobless.

While public health officials are exploring ways to gradually lift COVID-related restrictions, food insecurity will remain an ongoing issue for some time.

“Even when people come back to work, it’s not going to go back to normal,” said Devlin.

“Despite the tremendous tragedies out there, it’s a wonderful thing to see this collaboration and generosity,” he said. “Hunger is something everybody understands, and people really want to help.”

Philadelphia Deputy Mayor Cynthia Figueroa, who was also on hand during the April 30 warehouse delivery, said that as a result of the pandemic “people are not working in silos.”

In expanding the number of its emergency food sites, the city has “really leaned on the Catholic Church and NDS, because they’ve been just extraordinary,” said Figueroa.

The Latter-day Saints have actually “been partnering with Catholics for many decades,” said William James, executive secretary for the church’s Philadelphia area correlating council.

“We identify partners who are indisputable in getting the products down to end of the road” without inefficiencies or delays, said James, adding that “Catholic Charities USA has proven itself over and over again” in this regard.

Dominican Sister Donna Markham, president and CEO of CCUSA, said that the donation from the Latter-day Saints was “a reflection of our shared mission to reach out to the most vulnerable with kindness and compassion” at a time of unprecedented need.

As the April 30 delivery was unloaded, Hagedorn observed that the CFF founder Rita Ungaro-Schiavone, mother of current CFF head Schiavone, and NDS founding director Patrick Temple-West had been at the forefront of the area’s anti-hunger movement during the 1970s.

Both had “moved mountains” to alleviate food insecurity, drawing on a broad array of individuals and organizations, she said.

Asked what his mother would say about current efforts to respond to COVID-related food insecurity, Schiavone had a ready answer: “Do a little more.” 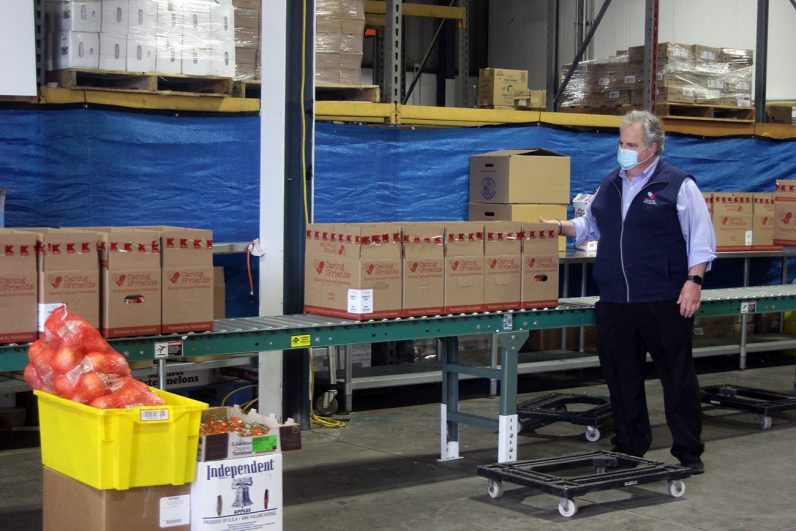 Vincent Schiavone, executive chair of the hunger relief nonprofit Caring for Friends (CFF) in Northeast Philadelphia, prepares to take delivery of 40,000 pounds of food donated to CFF and archdiocesan Nutritional Development Services by the Church of Jesus Christ of Latter-day Saints, April 30. The donation will boost supplies at NDS, which along with CFF has seen increased demand for services due to the coronavirus pandemic. (Gina Christian)

NEXT: Strong communications key to restoring parish life after COVID-19