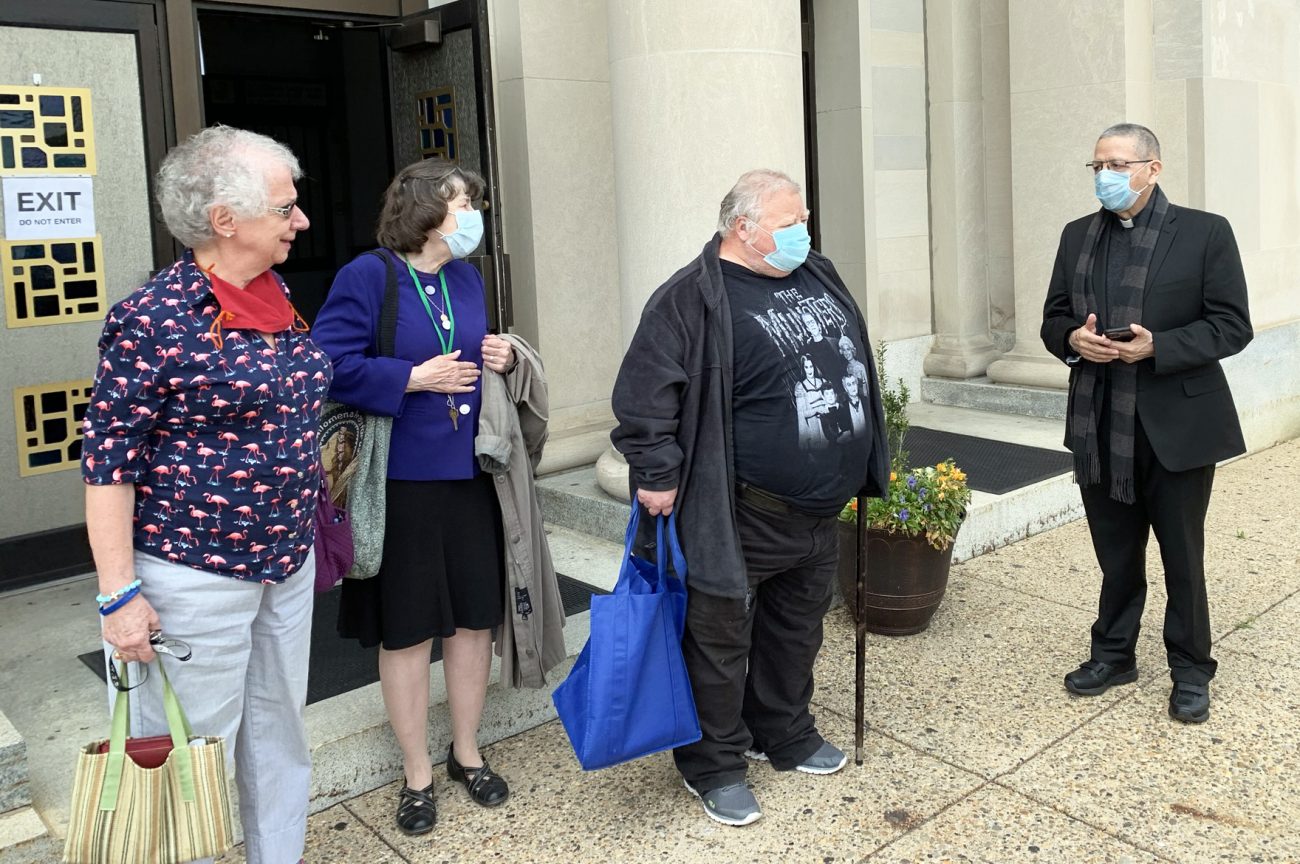 Father Alfonso Concha, pastor of St. William Parish in Northeast Philadelphia, explains to parishioners after a May 24 holy hour some of the new procedures that will be in place when public Masses resume on the weekend of June 6-7. (Photo by Gina Christian)

With public Masses resuming June 6-7, the Philadelphia Archdiocese is readying parishes to welcome area faithful back to the pews, while continuing to prevent the spread of COVID-19.

The logistics of liturgies amid scaled-down COVID-19 restrictions were outlined in a May 27 webinar presentation by Father Gill and Meghan Cokeley, director of the archdiocesan Office for the New Evangelization.

Both are co-chairs of a post-pandemic task force convened by Archbishop Nelson Perez to transition the archdiocese back to active, in-person participation in Masses and parish activities after about 10 weeks of stay-at-home orders. The group has launched its Arise initiative to provide a wide array of resources for parishes in navigating the coronavirus crisis.

That phase corresponds to the archdiocese’s “restricted” period, said Father Gill, who advised the webinar’s 3,250 attendees that the “balanced and straightforward guidelines” for in-person worship respect both sacramental mystery and modern medicine — without “moving in either extreme.”

Up to half full, and likely less

Although Pennsylvania’s yellow phase caps social gatherings at 25 persons, churches will be able to accommodate 50% of their building occupancy under the state’s guidelines for businesses, said both Father Gill and Cokeley.

Yet based on statistics from other dioceses, “it is very, very unlikely any of us will reach 50% occupancy right now,” said Cokeley.

She cited the Harrisburg Diocese, which resumed its public liturgies on the weekend of May 16-17 to just 33% occupancy in its churches.

Turnout in Texas, Florida and Louisiana has also been low, she said, assuring webinar participants that “the numbers we’ll be dealing with will be very manageable.”

In the archdiocese a number of area faithful, particularly seniors and those with pre-existing medical issues, recently advised CatholicPhilly that they remain hesitant about returning to church at this point in the pandemic.

“I need to say as clearly as I can (that) those who are sick or compromised due to health conditions are not to come to church” or to exercise liturgical ministries, he said, encouraging parishes to livestream Masses.

He also stressed that, at the direction of Archbishop Perez, archdiocesan faithful of all ages “continue to be dispensed from the … obligation on Sunday and on holy days until further notice.”

Even if parishes anticipate large congregations in the restricted phase, Father Gill said he “would recommend against” conducting sign-ups for seats.

“There should be a certain freedom that people make the choice to come to Mass,” he said. “They shouldn’t have to register.”

The most likely parish to attract an overflow crowd would be the Cathedral Basilica of SS. Peter and Paul, he said.

As rector of that parish, Father Gill and his pastoral team will “have to be prepared for people to remain outside to participate in Mass,” he said. “We’re not going to turn anyone away.”

Masks on, gloves off

Once in church, parishioners should expect that despite the pandemic precautions, “Mass is Mass,” said Father Gill. “It’s really important to keep in mind we’re talking about the Eucharist. And we celebrate it as we typically do, but with some adjustments.” 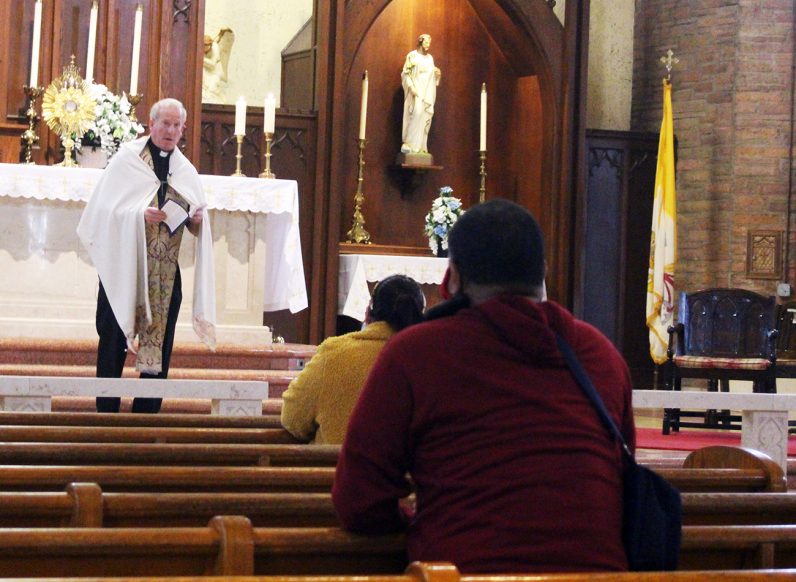 Father Thomas Higgins, pastor of Holy Innocents Parish in Philadelphia, advised parishioners at a May 24 holy hour that “Mass may look a little different” when public liturgies resume in the Philadelphia Archdiocese on the weekend of June 6-7. (Gina Christian)

Social distancing should be maintained through signage and the assistance of parish ushers. Members of a given household are permitted to sit together.

Congregants will be required to wear face masks at all times while in church, with the exception of children under 2 and those physically unable to remove their own masks.

However, priests, deacons and liturgical ministers are not to wear either masks or gloves, said Father Gill.

He noted that there has been “a lot of concern about the distribution of holy Communion,” and stressed that protocols are rooted in an awareness that the host “is not an object,” but rather “the Person of our Lord Jesus Christ.”

For that reason, gloves, tweezers and tongs are not to be used to distribute the hosts, which should be received “in the hand at this time,” Father Gill said.

Parishes may designate a “distinct Communion station … for those who continue to choose to receive on the tongue,” he said, with the minister “purifying and sanitizing” between each recipient.

Those who “are really fearful about the reception of holy Communion … have the freedom not to receive” and to instead “make a spiritual Communion,” said Father Gill.

Communion distribution to the sick, the homebound and nursing home residents will not resume until the archdiocesan “open” period, which will begin after the Philadelphia region has been moved into the state’s “green” phase, he said.

Singing at Mass “is to be kept to a minimum,” said Father Gill, and although a cantor and an instrumentalist may assist at the liturgy, “the use of choirs is suspended until the ‘open’ phase.”

The Centers for Disease Control (CDC) had earlier indicated that the act of singing could pose an increased risk of spreading COVID-19 through respiratory droplets.

To decrease contact with high-touch surfaces, hymnals and missalettes should be replaced with single-use or digital worship aids. Bulletins should be left for individual pickup, and collections should be deposited in stationary or long-handled baskets.

Holding hands during the Lord’s Prayer, offering the sign of peace, the use of holy water and the distribution of the Precious Blood all remain suspended.

“All areas of the church are to be routinely sanitized, including the confessional,” said Father Gill, who advised parishes to consult CDC guidelines for products and best practices.

Father Gill also said that “baptisms, confessions, marriages and funerals are to take place as usual,” with regard for “reasonable social distancing and a limitation of 50% occupancy of the church.”

Infant baptisms should take place “one baby at a time,” with the font cleaned between uses.

Similarly, adult catechumens should be received into the church in “distinct,” rather than combined, celebrations, said Father Gill.

The task force has assembled a number of multilingual resources to assist parishes with the challenges of resuming in-person liturgies.

Above all, said Cokeley, the faithful should keep “their gaze fixed on Christ” as the church doors reopen.

The liturgical directives and details “matter a lot, but they’re not the center,” she said. “He’s the center.”

For more information on the Arise initiative, and for details on the latest liturgical directives as COVID-19 restrictions are gradually lifted, visit archphila.org/arise.