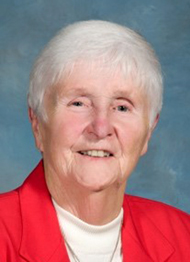 The daughter of the late Joseph and Laura Tracey, she attended Our Mother of Sorrows School and West Catholic High School.

In September 1951 she entered the Sisters of St. Joseph, Chestnut Hill and professed her final vows in 1959.

Sister Dorothy ministered in the archdioceses of Philadelphia and Newark and the dioceses of Charlotte and Trenton.

She is preceded in death by brothers Joseph, Thomas, Charles and William, and sisters Catherine, Virginia, Laura, Sarah and Marie. She is survived by nieces, nephews, grandnieces, grandnephews, great-grandnieces and great-grandnephews as well as a cousin. She is also survived by members of her congregation, the Sisters of St. Joseph.

A memorial service will be held at a later date.