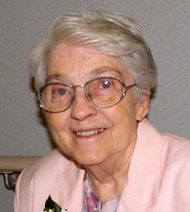 Sister Rose Albertine Weaver, S.S.J., age 96, died April 21 at St. Joseph Villa, Flourtown. She was in the 79th year of her religious life.

In September 1941 she entered the Sisters of St. Joseph, Chestnut Hill and professed her final vows in 1949.

Sister Rose ministered in the archdioceses of Philadelphia and Newark and the dioceses of Harrisburg and Trenton.

She is preceded in death by brothers Albert and Donald Weaver and her sister, Sister Marie Berenice, SSJ. She is survived by her sister Rita Foye (Louis), sister-in-law Betty Weaver, nieces, nephews and members of her congregation, the Sisters of St. Joseph.

A memorial service will be held at a later date.