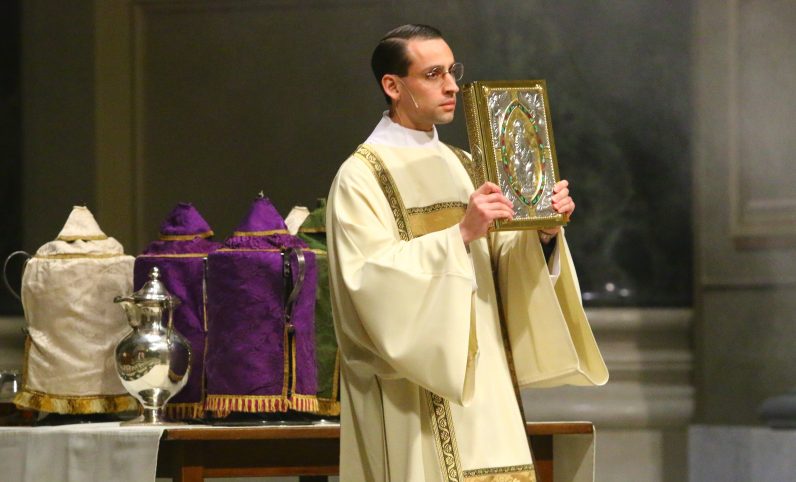 Deacon Louis J. Monica Jr. participates in the Chrism Mass April 6 at the Cathedral Basilica of SS. Peter and Paul, where he will be ordained a priest for the Archdiocese of Philadelphia on Saturday, June 20. Photo by Sarah Webb)

Deacon Louis J. Monica Jr., who is scheduled to be ordained to the priesthood for the Archdiocese of Philadelphia on June 20, is a bit of a throwback to previous generations: He was born and raised in the City of Philadelphia and entered St. Charles Borromeo Seminary straight out of high school.

Growing up in St. Timothy Parish in the Mayfair section of the city and attending school at St. Tim’s, he remembers his being a typical Catholic family. “We weren’t praying the rosary all the time or going to Mass every day, but my parents were faithful Catholics,” he said.

He became an altar server while in grade school and loved it. By the time he was in the seventh grade he was working in the rectory where he saw priests just as normal guys like everyone else.

“I saw the camaraderie between them and thought it was something I could do and maybe God was calling me to it,” he said. This more or less continued through his high school years at Father Judge, although there were times when he also considered a possible career in the restaurant field. “My Dad and Mom had a catering business,” he explained.

But that pull toward the priesthood was never completely extinguished, and when Father John Donia arrived at St. Timothy in 2007, he became Louis’ mentor.

“I learned a great deal from him, and he has been a strong support for me as I was getting ready to go into the seminary, and has remained a close friend and confidant while I have been in seminary,” Deacon Monica said. “I can’t imagine going through the nine years without his friendship and support.”

Other priests who supported him as he discerned his vocation include Fathers Michael Oliveri, Stephen Leva and Patrick Welsh, who was especially encouraging to him when he had last-minute doubts before entering the seminary and got him registered on the very last day it could be done. 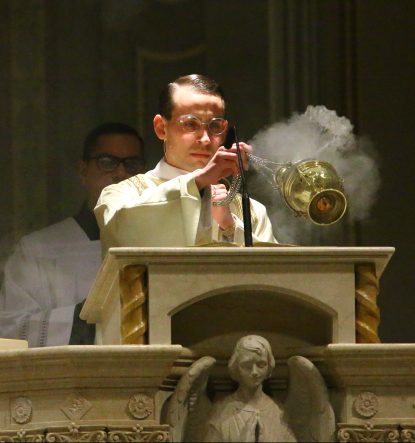 Deacon Louis Monica Jr. incenses the Book of Gospels at the Cathedral Basilica of SS. Peter and Paul. Sarah Webb)

The seminary itself was a revelation for Louis. “I never expected to get so close to people as those I met in the seminary,” he said. “They are like brothers to me.”

His was not a large class, as class sizes go at St. Charles, and over time it got smaller.

“We saw guys come and go,” he said. “When you see people leaving you think, ‘maybe this is not for me.’ But each vocation is a individual calling. God doesn’t call us in groups, he calls us individually. At the end of the day God was calling me and I had to respond to that.”

His deacon assignment has been at Mary Mother of the Redeemer Parish, North Wales.

“The pastor and priests here are fantastic,” he said. “I’ve learned so much from them. It has been a great place to grow.

“Now that I know this is my vocation. I am eager to get started celebrating the sacraments and settling in as a priest.”

Father Monica’s first Mass is scheduled be celebrated at St. Timothy Parish in Northeast Philadelphia, the day following his ordination by Archbishop Nelson Perez at the Cathedral Basilica of SS. Peter and Paul.

Serving at the altar in Holy Week last April, Deacon Louis J. Monica Jr., left, will be ordained a priest by Archbishop Nelson Perez (center) at the cathedral on June 20. At right is Father Dennis Gill, rector of the cathedral. (Sarah Webb)

NEXT: The youth from Nigeria will be a priest for Philadelphia