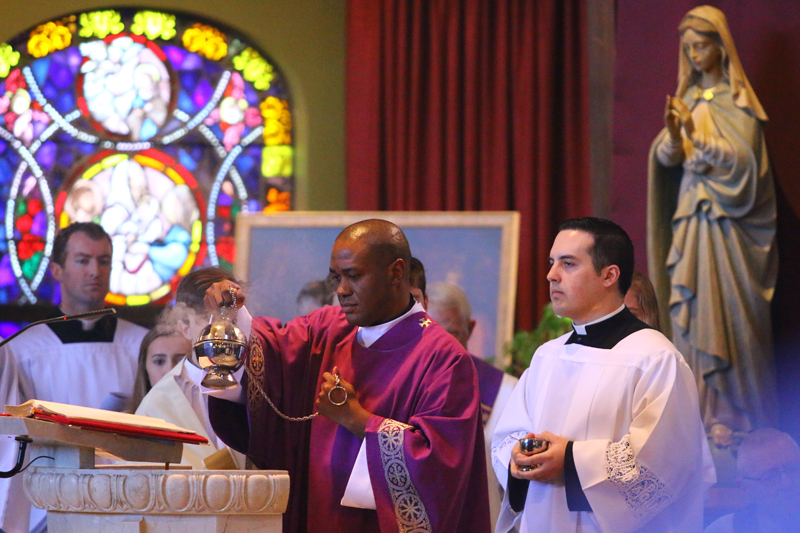 When Kevin Chinonye Okafor, 39, is ordained to the priesthood by Archbishop Nelson Perez on June 20, it will be the end of an almost three-decade journey.

Born in the farming village of Ojoto in Anambra State, Nigeria, he was the sixth of the seven children of Simon (now deceased) and Rosalina Okafor. Theirs was a devout Catholic family and he would often accompany his mother to morning Mass at his local parish, St. Paul Church.

As a matter of fact, Nigeria has a large and growing Catholic population thanks to the mostly Irish missionaries in past generations. This is reflected in his baptismal name Kevin and the fact that St. Patrick is the patron saint of Nigeria. Their work was so effective that today Nigeria sends missionaries rather than hosts them.

“I had that passion to be a priest from the time I was a young boy,” Deacon Okafor recalls.

From junior high school onward he attended minor seminaries. He then continued his education at major seminaries and the secular University of Ibadan.

But the desire to be a missionary was still strong and in 2014 he came to America to work as a layman in the mission fields with the Theatine Fathers in Colorado, serving a largely Hispanic population. 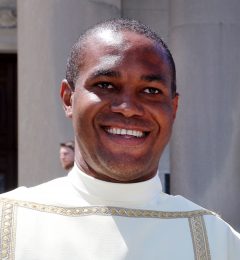 Deacon Kevin Okafor will be ordained a priest for the Archdiocese of Philadelphia June 20. (Photo by Sarah Webb)

His language of birth was Igbo, one of several native languages in Nigeria. English is the national language that unites the country, and because all Nigerian children must learn it, Deacon Okafor is fluent in both languages.

Spanish presented a greater challenge, but he learned that too. Of course the culture in the United States is different in many ways from that in Nigeria and to this he also adapted.

But in his heart what he really wanted was to a priest, not a lay minister. Meanwhile, his family back in Nigeria was praying for his vocation. “My mom has been my inspiration,” he said.

“I wanted to continue my studies to be a priest and I talked to a friend I have in Philadelphia. He put me in touch with the vocations director and I talked to Archbishop Chaput and he allowed me to come here,” Deacon Okafor remembers.

“Last year I was ordained a deacon and now I am incardinated in the Archdiocese of Philadelphia.” 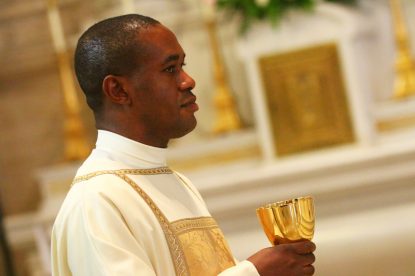 Deacon Kevin Okafor, who will be ordained a priest for the Archdiocese of Philadelphia June, distributes holy Communion at his diaconate ordination in 2019 at St. Charles Borromeo Seminary. (Photo by Sarah Webb)

This past year Deacon Okafor has been in ministry at St. Andrew Parish in Newtown. “The pastor (Msgr. Michael Picard) has been very good to me. He helped me a lot, and the people were welcoming,” he said.

After his ordination as a priest his first Mass will be celebrated at St. Martin of Tours Parish where he worshipped when he first arrived in Philadelphia. The homilist at that Mass will be Father Chris Walsh.

“He was my spiritual director and I’ve been to a couple of Masses at his parish,” Deacon Okafor said.

“I’m looking forward to my ordination and I thank God I am here. I hope to be a good, holy priest for Philadelphia, to be there for the people and to do the will of God.”

NEXT: Early thought of priesthood, put aside, comes full circle at ordination