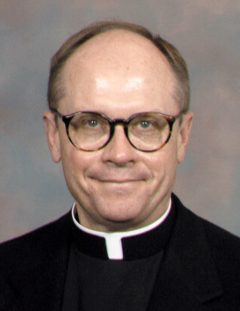 Father Georges Thiers, C.O., who celebrates his 50th anniversary of ordination this year, has a unique ministry that keeps him young.

Father Thiers is the provost, or chief officer of the oratory while Father Convery is pastor of St. Francis Xavier Parish and School, although both priests work as a team.

At this time, their little community also includes two younger religious brothers in formation for the priesthood. They are Brother Joseph Mosko and Brother Joshua Vargas, in their theology years at St. Charles Seminary with residence at the oratory.

In addition to the sanctification of its members, the Oratory at St. Francis Xavier has a special focus on the evangelization of young adults, a major population in that part of the city.

In his own life, Father Thiers credits spiritual formation to his “two wonderful parents Walter and Adeline,” and good holy priests both at St. Raymond Parish in Philadelphia and Bishop McDevitt High School.

As a young priest he served at St. Ambrose, Philadelphia and St. Eleanor, Collegeville and taught at Cardinal O’Hara High School and Lansdale Catholic High School before the founding of the Oratory at St. Francis Xavier.

The oratory movement itself was founded by St. Philip Neri in Rome in 1575 and first introduced to the English-speaking world by St. John Henry Newman, who founded an oratory in Birmingham, England in the 19th century.

“Newman is very contemporary,” Father Thiers said. “He saw in St. Philip a pastoral approach that was a response to rampant secularism.”

The Oratorians of St. Philip Neri differ from a typical religious order or congregation in that members are not bound to it by vows. Although they have stability and may remain at the same oratory for life, they may leave for a different ministry as a priest if they so choose.

Father Thiers credits his own entrance into the oratory through reading biographies of St. Philip Neri and the works of St. John Henry Newman, whose canonization he attended last October.

Father Theirs is especially taken by the episcopal motto of St. John Newman, “Heart Speaks unto Heart.”

That this particular oratory is located at St. Francis Xavier Parish is a happy coincidence, as Father Thiers explained. St. Philip Neri (1515-1595) and the great missionary St. Francis Xavier (1506-1552) were contemporaries, and as a seminarian Philip confided to his confessor that he would like to join Francis in the mission fields.

“Rome is your India,” his confessor told him, referring to the rampant secularism in his home city.

Most of the young adults who come to the Oratory at St. Francis Xavier for spiritual direction are post-college because so many young professionals live in that part of the city.

But not all who come are a college grads. “People who don’t go to college have souls too,” Father Thiers said.

Many of the young people remain active at the oratory after marriage, but very often after the birth of their first child they relocate to the suburbs. Presumably, the spiritual guidance and formation they received from Father Thiers and the other members of the Oratory at St. Francis will stay with them through the years ahead.

Catholics of a certain age know that the Latin ora pro nobis means “pray for us.” Hence an oratory is “a community of people who pray,” Father Thiers explained, and central to the life of the oratory is daily prayer.

“Our success,” he said, is based on “Do those who come have that personal commitment to the Lord and do they frequently celebrate the sacraments?”

But in all things, two decades at the oratory have taught Father Thiers humility. “You are not in charge,” he said. “Your job is to be an instrument of God’s love.”

PREVIOUS: The living tell the story of God’s goodness in pandemic’s wake