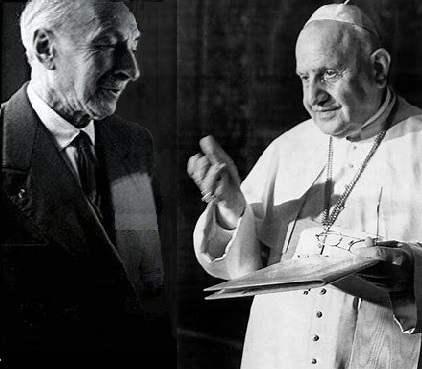 French historian Jules Isaac (seen at left in this composite image) met with Pope John XXIII sixty years ago this June to address the need for healing and clarification in Christian teaching about Jews and Judaism. (Photo courtesy of the Institute for Jewish-Catholic Relations of St. Joseph’s University)

Local and international scholars marked a milestone in Jewish-Christian relations last week, recalling a brief but pivotal meeting between Pope John XXIII and French historian Jules Isaac, who transformed his own persecution as a Jew into a call for healing.

The private audience, which took place on June 13, 1960 between the pope and Professor Isaac, ultimately led to Vatican II’s declaration “Nostra Aetate” (“In Our Time”).

The document clarified the Catholic Church’s relationship with non-Christian religions, and affirmed the “spiritual patrimony common to Christians and Jews” (Nostra Aetate, 4).

Sixty years later, the dialogue between Jews and Christians has progressed but still needs development, according to participants in a June 11 webinar sponsored by the Institute for Jewish-Catholic Relations (IJCR) of St. Joseph’s University and the Cardinal Bea Center for Judaic Studies of the Pontifical Gregorian University in Rome.

However, “we have only begun in (the) particular task” of “holding theology accountable to history” and of “reinvigorating Scripture study,” she said.

A renowned Jewish academic, Isaac dedicated himself to untangling the roots of Christian anti-Judaism, a mission born of his own suffering during the Shoah (the preferred term for the systematic massacre of Jews during World War II).

After the Nazi invasion of France, Isaac’s family was arrested and sent to the Auschwitz concentration camp, where his wife and daughter died. His son-in-law managed to escape, and Isaac himself lived as a fugitive during the war.

Amid the horrors of Nazism, Isaac reflected on and researched aspects of Christian teaching about the Jews that had historically fostered anti-Judaism, such as the allegation that all Jews were responsible for Christ’s crucifixion.

Redressing this “teaching of contempt” became his life’s mission, one in which Isaac was encouraged by his imprisoned wife, who had managed to send a smuggled note with her final words to him: “My dearest … be steadfast and finish your work, for which the world is waiting.”

In 1947, Isaac published “Jésus et Israël,” the first full analysis of Christian anti-Judaism. Later that year, he helped formulate the International Council of Christians and Jews’ “Ten Points of Seelisburg,” which stressed Christianity’s need to recover a historically and theologically accurate understanding of Judaism.

Isaac met with Pope Pius XII in 1949, but it was his 1960 encounter with Pope John XXIII (who as Cardinal Roncalli had helped thousands of Jews to flee the Nazis) that spurred the church to act on the issue.

The year prior, the pope had stricken the word perfidis (Latin for both “treacherous” and “unbelieving”) from the Good Friday prayers for Jews. In his conversation with Isaac, who had proposed that a Vatican subcommittee be formed to study church teaching on Jews, Pope John XXIII immediately replied, ‘That is what I have been thinking from the beginning of this meeting.”

That subcommittee on “questions about Jews” (quaestionis de Iudaeis) was quickly called by Cardinal Augustin Bea, with whom Isaac also discussed his work at length. Scholars hold that such efforts would not have been possible without Isaac’s initiative.

Removing the historical Christian bias against Jews frees members of both faiths, who are “partners not enemies,” said Rabbi Greenberg, founding president of CLAL: The National Jewish Center for Learning and Leadership.

“Both of these religions are profoundly intertwined,” said Rabbi Greenberg. “Both are covenants of redemption … walking in a parallel path.”

The journey requires that believers of each faith regard the other with respect and honesty, especially in a highly polarized society, said Boys and Greenberg.

“We need to show how much a deeper knowledge of Judaism and a relationship with Jews enriches our Catholic life,” said Professor Boys.

Such humility and authenticity can also inspire the disaffected “Nones,” those who do not identify with any faith tradition, said Rabbi Greenberg.

“To be able to discern the fullness of the image of God in the other” releases believers from depending on “feelings of exclusivity and superiority” to sustain their religious commitment, he said.

Six decades after his brief talk with Pope John, Isaac “would be moved to see his work taken so seriously,” said Professor Boys.

At the same time, she added, both Christians and Jews should “take from him a sense of this being a sacred mission for us as well.”

NEXT: Archbishop Perez recalls ministry with priest to be made bishop