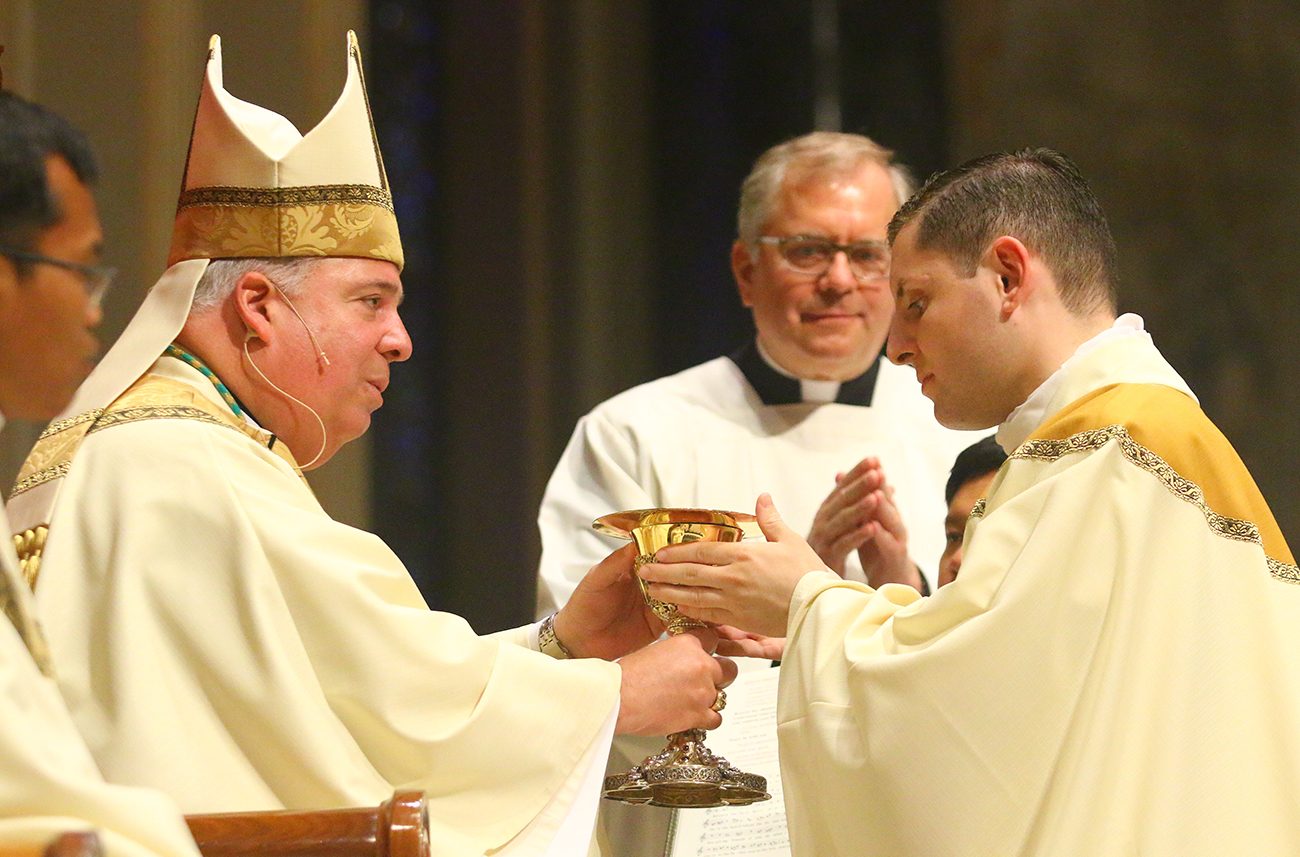 In what Archbishop Nelson Perez called “a day of great thanksgiving for the church,” five new priests were ordained for the Archdiocese of Philadelphia.

On Saturday, June 20 at the Cathedral Basilica of SS. Peter and Paul, the sacred vocation of Wilmer Chirino Gonzalez, August Taglianetti, Kevin Okafor, Louis Monica Jr. and Cesar Izaguirre was brought to fruition.

(See photos from the ordination here.)

No set backs or challenges — not even the coronavirus pandemic — could stop the fulfillment of the call God placed on their hearts.

“After many years actually, from the day of your birth, it comes out to that moment; that moment in which the church now calls you forth,” said Archbishop Perez as he reflected on the presentation of the candidates — the part of the rite when he and the church officially choose the men for the priesthood.

That moment will come soon for one remaining member of the priestly class of 2020, transitional Deacon Martin Okwudiba, who is studying in Rome and ready for ordination. Coronavirus restrictions are delaying the process to secure his visa to return to Philadelphia. While no definitive plans are set, his formation advisor Msgr. Gregory Fairbanks is hopeful the ordination will come soon.

Despite the pandemic, the sacrament of holy orders remains unchanged. The celebration of the sacrament “calls for as many of the faithful as possible to take part” according to the Catechism of the Catholic Church (CCC 1572).

This year the faithful did gather at the cathedral and at home via livestreamed video, although the size of the in-person congregation was far smaller than in years past.

Traditionally the ordination at the cathedral, which seats more than 1,000 people, is open to the public, and the faithful have poured in to the point of standing room only.

This year each candidate could invite 50 guests for a total of 250 people. In addition 80 priests were invited, including the candidate’s priestly sponsor, home parish pastor and the pastor of the parish where the candidate served the past year as a transitional deacon.

That count of priests also included those who served in their seminary formation. Additional priests could be invited by the ordinandi as part of their 50 guests.

With the social-distancing restrictions in place, the cathedral was well under 50% capacity. Further safety precautions included guests wearing masks, hand sanitizer available at entrances and every other pew roped off to ensure distancing.

While some logistics were new, the sacrament remained the same — characterized by joy.

Newly ordained Father August Taglianetti “was smiling the whole time,” according to the observation of his step-sister Breanna. Her eyes lit up behind her mask as she recalled her step-brother trying to be serious, only to have his smile quickly return.

“We are overjoyed by his joy,” said his father, Thomas Taglianetti, adding that his son has known he wanted to be a priest since was a little boy. Now he says his son is “at peace.”

Deacon Javie served alongside newly ordained Father Kevin Okafor as he was a transitional deacon at St. Andrew’s this past year.

St. Andrew parishioner Devin Barnaby is excited for Father Okafor and said it was “beautiful” to witness “someone giving up their life for the church.”

After hearing Father Okafor preach for a year at St. Andrew’s, she believes he is going to be an amazing priest.

“The implications of this day, you don’t know, but trust and hope that those implications are filled with God’s grace,” said Archbishop Perez to the ordinandi. “And whatever moments you might have that might be down moments and challenging moments, remember this day … because this day is God’s promise to you that he will be with you.”

Learn more about each newly ordained priest in our Profile section.

NEXT: Archdiocese pays $50 million, so far, to abuse survivors