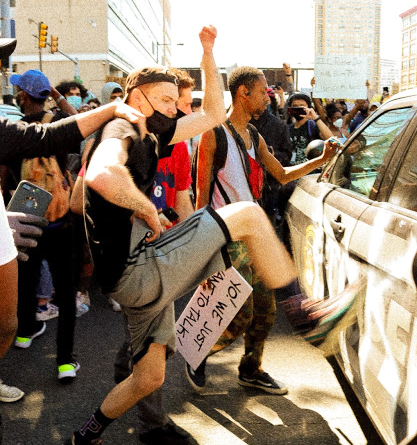 Protesters damage a police vehicle during a May 30 demonstration against the killing of George Floyd while under Minneapolis police restraint. Initially peaceful gatherings sparked widespread violence throughout Philadelphia and several suburbs over the weekend, leading to curfews and the activation of the Pennsylvania National Guard. (Photo by Donovan Carter)

Clergy and religious at several parishes near scenes of rioting this weekend plan to continue their normal ministries on Monday, as they remain on alert for any escalations in violence.

“We’re looking to open, but we’re going to be smart about it,” said Father Liam Murphy, coordinator of the archdiocesan Mother of Mercy House mission in the city’s Kensington section. “As long as there is no threat of (mob) violence erupting, the doors will be open and we’ll be packing food for our Thursday giveaway.”

Peaceful protests against the killing of George Floyd — a black man who died May 25 under restraint by Minneapolis police — turned violent in Philadelphia on May 30, as rioting broke out in Center City that evening.

While dozens of businesses were looted, a three-alarm fire raged in the 1700 block of Walnut Street, not far from the Cathedral Basilica of SS. Peter and Paul, where the Vigil Mass for the Solemnity of Pentecost was being celebrated by rector Father Dennis Gill. The cause of the fire remains undetermined.

“The cathedral was safe (on Saturday evening),” said Father Gill. “However, protestors were up and down the (Benjamin Franklin) Parkway next to the cathedral.”

Mayor Jim Kenney issued a citywide 8 p.m. curfew on Saturday until 6 a.m. Sunday. Hours after it ended, the unrest surged beyond the locked-down Center City area, with looting in several sections of the city including on Kensington and Aramingo Avenues.

Sister of St. Joseph Linda Lukiewski said that she and her fellow parishioners at St. Joan of Arc, part of Holy Innocents Parish in Philadelphia, could hear helicopters hovering over the nearby outbreaks.

She also experienced difficulty in attempting to reach stores on Aramingo Avenue due to the heavy police presence, and said that the city-wide clashes reminded her of the 1964 Columbia Avenue riot in North Philadelphia.

Fellow Sister of St. Joseph Kathy McShane, director of the order’s Kensington-based Welcome Center for immigrants, said she and her community members “could see people walking out of (looted) stores with merchandise.”

The center, which provides education, immigration and outreach services to some 200 clients each year, is located across the street from Mother of Mercy House on the 700 block of Allegheny Avenue. Sister Kathy said that a neighbor, who lives several doors down, came to shelter at the Welcome Center after seeing looters attempt to force their way into the pharmacy next to her apartment.

Yet continuing riots, particularly in West Philadelphia, led Mayor Kenney to issue another citywide curfew from Sunday at 6 p.m. to Monday at 6 a.m. The Benjamin Franklin Bridge was closed until Monday morning, and SEPTA suspended service for the duration of the Sunday night curfew. 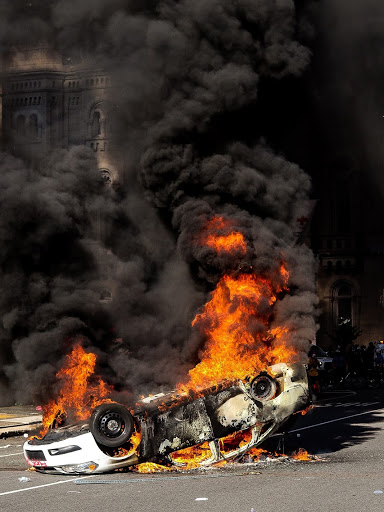 A vehicle burns during a May 30 Philadelphia demonstration against the killing of George Floyd while under Minneapolis police restraint. Initially peaceful protests turned violent, sparking riots and looting throughout the city and several suburbs over the May 30-31 weekend. (Photo by Donovan Carter)

The Pennsylvania National Guard, activated on Sunday, is now responding to requests for assistance from both Philadelphia and Montgomery County. At least 13 Philadelphia police officers have been injured, with one struck by a car while trying to stop looters, and as of Sunday afternoon there were 215 riot-related arrests in the city.

Two pharmacies near St. Cyprian Parish in West Philadelphia were attacked by looters, according to pastor Msgr. Federico Britto, who said that the damage had widespread effects on area residents.

“I was just on the phone with a parishioner this morning, and she said she can’t get her medications or get to the bank, since both are now closed,” he said.

The violence that has flared across the nation has extended to the suburban counties within the archdiocese. Stores at the King of Prussia Mall were ransacked late Saturday night, and both Upper Merion and Upper Darby Townships enacted overnight curfews for Sunday evening.

Clergy and religious contacted by CatholicPhilly said they are bringing faith and prayer to a tragedy that has been compounded by chaos.

“We just keep praying that people stay safe,” said Sister Kathy. “We pray for George Floyd and his family, for the injustice of it all and for the police, the good men and women who aren’t happy with (this) reaction.”

Father Thomas Higgins, pastor of Holy Innocents Parish, said he was “greatly saddened by the killing of George Floyd,” and that although “we need to protest, the violence and looting (are) a disservice to the whole cause.”

Msgr. Britto agreed, adding that it was now “time to restore our city.”

On its Facebook page, Mother of Mercy House stressed that the killing was “not just a political matter,” but “at root, a deeply spiritual matter.”

The center’s post also invited readers to reflect whether the Holy Spirit might be “in some way present in (the) protests,” not in the violence but rather in the “suffering and anger” of protestors over injustice.

At Pentecost, “we are … praying that we will allow the Spirit already within us … to work in us and to turn the upside down world right,” the post said.

Capuchin Friar Andrew McCarty of the Padre Pio Prayer Center in Frankford, whose members regularly minister along Kensington Avenue, said that he and the friars are praying for all those affected by the killing.

“Our hearts are with those who are not safe this night and those who, because of their complexion, feel unsafe on a daily basis,” he said.

In the meantime, said Brother Andrew, “as believers, and as Franciscans, we have hope that one day a sense of calm will return and justice will prevail.”

NEXT: Task force works to re-envision youth ministry in archdiocese