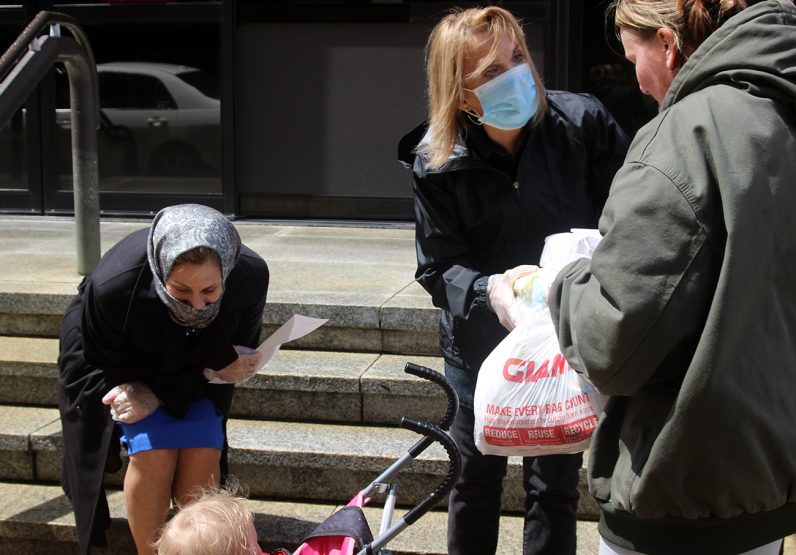 Lizanne Hagedorn (left), executive director of archdiocesan Nutritional Development Services (NDS), and NDS staff member Nita Weightman greet a family that collected free diapers and breakfast items at the Archdiocesan Pastoral Center in Philadelphia, April 21. The center remains closed June 2 due to civil unrest and cleanup efforts in the city, but NDS and other archdiocesan social service agencies have now resumed food and diaper distributions at most sites, several of which had been closed due to threats of violence and looting on Monday. (Photo by Gina Christian)

Several archdiocesan social services outreaches were up and running Tuesday morning, June 2, after closing the previous day due to ongoing civil unrest.

Assistance with food, rental and mortgage payments, and utility bills have become even more critical for clients during the COVID-19 crisis, according to Huot and her team.

CHCS’s four senior centers had earlier suspended on-site activities due to the pandemic, but have remained open for “grab-and-go” food distribution. Philadelphia residents aged 60 and up can receive seven frozen meals per person each week, with clients urged to call the listed sites ahead of time.

Protests and violence over the police killing of Minnesota resident George Floyd forced the CHCS centers to close on Monday, said Huot, who confirmed that the sites were able to reopen on Tuesday.

“We have seniors expecting their week of meals, and are trying to balance keeping our staff and seniors safe with getting our seniors the food they are relying on,” said Huot.

Yesterday, archdiocesan Catholic Social Services (CSS) had to shutter its Philadelphia food pantries, along with its family service centers in both Philadelphia and Chester, over safety concerns.

“All of our food distribution sites (were) in close proximity to areas of rioting and looting,” said Amy Stoner, CSS’s director of community-based services and homeless division.

Assistant director Kathleen Bevenour added that CSS “(monitored) events closely” throughout Monday evening with an eye “to reopen for the communities in need” on Tuesday.

The agency addresses food insecurity through a network of food pantries and through its administration of the federally funded school meals program – with demand for both services soaring during the pandemic.

On Monday, some NDS food cupboards remained open, Hagedorn said, but “a number of sites cancelled themselves out of security concerns.”

“We did not deliver meals in Philadelphia but were able to get to the (suburban) counties,” she said.

Along with CSS, NDS has become a key source for families in need of free diapers, with distributions taking place at both agencies’ sites throughout the area. However, a city-sponsored NDS site at the Archdiocesan Pastoral Center on 17th Street remains closed today, said Hagedorn.

Archdiocesan social services staff confirmed they continue to track a layered crisis of pandemic and protests that has shifted rapidly.

“This could change in a heartbeat,” said Hagedorn.