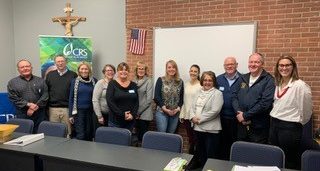 St. Cornelius Parish in Chadds Ford is partnering with Catholic Relief Services (CRS), the official international humanitarian agency of the Catholic community in the United States, to advocate for vulnerable populations throughout the world.

The St. Cornelius Chapter is the 21st of the newly formed CRS chapters, which began in August 2019.

Aiming to create a movement of Catholics and other people of goodwill engaging to end global poverty, the chapters participate in meaningful action such as advocating to Congress, writing letters to the editor and op eds, and fundraising for CRS, according to a CRS overview of the chapters.

“A lot of times you can figure out how to give back locally … but there’s people outside of the United States that are much worse (off) than we are,” said JoEllen Muntz, the St. Cornelius Chapter co-lead.

The formation of the St. Cornelius Chapter came from involvement in another parish organization, Care for Our Common Home, which focuses on the environment.

Msgr. David Diamond, the pastor of St. Cornelius, was also involved in Care for Our Common home, and he and Muntz reached out to CRS. The parish’s chapter was born from there.

It’s “proven wonderfully beneficial” for the parish and those involved, said Msgr. Diamond.

The group meets at least twice a month. After training with CRS leaders, all chapters participate in a national conference call once a month. The call features a guest speaker, question and answer sessions, ongoing training and an opportunity to share the chapters’ best practices. After the national call, each chapter meets once more with its local members.

In Chicago, a group of young professionals formed a CRS chapter, and other chapters across the nation are made up of individuals or multiple parishes coming together.

Guimond works directly with the St. Cornelius Chapter, and is the contact for the Philadelphia and Camden areas.

Although the St. Cornelius Chapter formed in January, two months before COVID-19 rocked Pennsylvania, the coronavirus has not stopped their advocacy efforts. They continue to meet through Zoom and communicate via email.

Currently, they are advocating for the Global Child Thrive Act, which aims to “integrate Early Childhood Development into development and emergency humanitarian programs,” according to the CRS website.

The St. Cornelius Chapter worked to scheduled meetings with two congresswomen representing their area. Muntz and other members met via Zoom with U.S. Rep. Mary Scanlon (D), representing Pennsylvania’s fifth congressional district (Delaware County and parts of Chester and Montgomery counties) and a cosponsor of the Global Child Thrive Act. They hoped to meet in-person, but instead met virtually due to coronavirus restrictions.

Muntz said the chapter based its advocacy approach on the training from CRS and practices shared from a chapter in Minnesota during a national conference call.

St. Cornelius’ CRS Chapter is supporting a recent CRS initiative, Lead the Way on Hunger, which responds to the global crisis of hunger and malnutrition that is escalating due to the coronavirus.

A World Food Program report projects that over a quarter-billion people will experience acute hunger by the end of the year, according to CRS president and CEO Sean Callahan who cited the statistic in a May 14 teleconference. Read more about CRS’ Lead the Way on Hunger initiative here.

The campaign is part of a larger initiative titled “Lead the Way,” which also includes “Lead the Way on Migration.”

Learn more about “Lead the Way” in the video below:

Msgr. Diamond said the CRS chapter provides a wonderful opportunity for catechesis in the parish, especially for many who are confused about the difference between CRS and other local modes of Catholic charities like the Catholic Charities Appeal and Catholic Social Services.

St. Cornelius Chapter’s work will continue to focus on advocacy, according to Muntz, with smaller projects promoting and educating others in the parish about CRS. They also plan to fundraise for CRS.

Guimond said the St. Cornelius Chapter is “really outstanding in their leadership” and is making great strides in advocating efforts.

She views them “as champions in the CRS chapters.”

PREVIOUS: Meet the 13 men to be ordained deacons June 13 at cathedral

NEXT: At first public Masses in archdiocese, a grateful spirit of joy